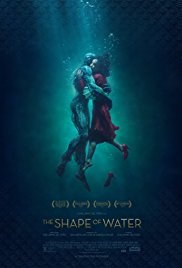 I’ll never forget the time I went to see the animated version of Beauty and the Beast. At the end of the film (hardly a spoiler!) Belle declares her love for the beast which breaks the spell and magically transforms him back into a man. He stands up and turns to his beloved with bright rays of sunlight surrounding him as his human face is revealed. At that moment, my friend (who shall remain nameless) then leaned over and whispered to me in all seriousness “he’s not as good looking as I would have thought” which sent me into howls of laughter. The moral of the story was about looking past someone’s outward appearance and seeing the beauty within. My dear friend completely missed the point in that moment.

The Shape of Water has been heaped with critical praise and has received thirteen Oscar nominations. However, this time it seems like I might be missing the point of the film as I just can’t seem to get past a few critical plot points in the story. The film is set in the early 1960’s where Elisa (Sally Hawkins) works as a cleaning woman in a top secret government laboratory. Elisa is mute, but able to communicate using sign language with her friend and co-worker Zelda (the always delightful Octavia Spencer). One night while cleaning they meet Colonel Strickland (Michael Shannon) a cold bully of a man who has brought a new asset to the facility. The asset is a fish/swamp creature that the Colonel has caught in the Amazon. Although the creature bites off two of Strickland’s fingers in gory fashion, Elisa is intrigued by the creature and decides to befriend it (this being my first Huh? moment in the film). Unafraid of losing body parts, Elisa brings the creature hard boiled eggs, then music, and soon Elisa is teaching the creature some words in sign language.

Elisa soon overhears the Colonel explaining his plans for the asset to Dr. Hoffstetler, the head of research at the facility (Michael Stuhlbarg). To study the creature’s physiology, they will kill and dissect it and use the information in their research for space travel in order to beat the Russians in the space race. The doctor disagrees with the plan as he believes the creature can communicate and doesn’t want it killed. Desperate to save the creature, Elisa plots an escape for her scaly friend. Things really get crazy then as Elisa manages to get the creature safely to her apartment bathtub where she realizes that she is hopelessly in love with the fish (this would be my second Huh? moment).

Director Guillermo del Toro has a love of monsters and of being an outsider. He has spoken of his fondness of old horror movies like The Creature from the Black Lagoon and how he wondered what happened next after the creature met the beautiful woman. This is where Hollywood and Main Street might not not meet. It never really occurred to me to think about the creature and the woman falling into romantic love and what might come from that. But what seems rather creepy to me is creative and groundbreaking in Hollywood. Elisa turns on all the faucets, floods her bathroom and has quite a romp with her very male fish friend.

I understand the meaning behind the coupling of Elisa and the creature—love is love regardless of our differences and two lonely outsiders can find true love. But it’s just such a stretch to imagine why Elisa would feel attraction for this swamp thing with his flaring gills and spooky eyes. Affection I can see but lust? Not so much. With reflection I realize I’m just like my old friend who couldn’t see the beauty in the beast but I honestly just couldn’t buy it.

On the positive side, the acting in the film is fantastic. Sally Hawkins is amazingly talented at showing the speechless Elisa’s many emotions as she bares her soul (and more) on screen. Michael Shannon just makes you clench every time his evil Colonel appears he is just so terrifying. Octavia Spencer elevates every scene she’s in but in the future I’d love to see her take on a role other than the sassy sidekick. Richard Jenkins is wonderful as Elisa’s sad and lonely neighbor and has one truly heartbreaking scene that makes you wish his story could have a whole film of his own. The scenery is beautiful and all of the nods to old Hollywood really do give the film a beautiful and dreamy quality. Even with all of these terrific elements in place, it’s still a film about a girl sleeping with a fish.

So if your tastes run more towards Hollywood than small town USA, by all means take in the many delights of The Shape of Water. But if you like your romance to be between humans don’t say I didn’t warn you!

Fitness Friday: Join CycleBar and the Charlotte Hornets to ‘Ride at the Hive’

My eleven year love affair with My Gym...