Home Entertainment Smarty Movie Review: Same Kind of Different As Me
EntertainmentThings To Do

Smarty Movie Review: Same Kind of Different As Me

Today is a two-for-one special—a movie review and a book review! 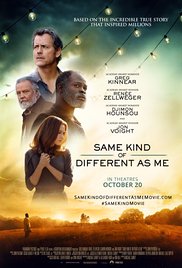 My journey to discovering Same Kind of Different as Me started not by reading the successful book that inspired the film, but by reading the true story of a woman who read the bestseller and was so moved by it that she went on to do great things herself. Tasked with selecting a book for my fantastic book club, a tennis teammate recommended The Hundred Story Home (thanks Kay!) a memoir by Charlotte resident Kathy Izard. Kathy was so inspired by the story of the wonderful friendship that developed between a Texas art dealer and a homeless man in Same Kind of Different as Me that she invited the pair to speak at a fundraiser for the Urban Ministry Center in Charlotte where she regularly volunteered. Her encounter with the formerly homeless Denver Moore sent her on a life-changing quest to help with homelessness in the Queen City. Kathy’s efforts culminated in the opening of Moore Place, which houses over one hundred formerly homeless Charlotte residents. Although reading about the homeless problem in my city isn’t normally what I would consider an engrossing read, I could not put this amazing book down until I’d finished every last page. Many can relate to Kathy’s story of being a busy yet happy mom who comes to a crossroads as she wonders if she is meant to do more with her life. I highly recommend this beautiful book to anyone who hopes to reach their full potential in life (which should be everybody!)

With Kathy Izard’s vivid descriptions of Ron Hall and Denver Moore in my mind, I was eager to read Same Kind of Different as Me. Since I had several books in my reading queue and knew it would be a while until I could read it, I was especially pleased to learn their story was coming to the theater. The film centers around Ron Hall (Greg Kinnear), a wealthy Texas art dealer who seemed to have it all. But behind the closed doors of his enormous home, Ron was living a lie and his marriage was crumbling due to his infidelity. Ron’s wife Deborah (Renee Zellweger) decides to give Ron a second chance and encourages him to spend time with her by working together at the local homeless shelter. Initially Ron wants nothing to do with the shelter and would much prefer writing a check to ladling out food to the people in need. But Deborah is insistent that he engage in helping others and singles out one disturbed man known as “Suicide” as the man they are meant to help. After several failed attempts, Ron eventually carries on a conversation with this man and learns that his real name is Denver (Djimon Hounsou). Denver is hesitant to make friends with this rich white man, thinking a real friendship cannot last. He compares it to the system of catch and release when a fisherman returns a fish back into the water after working so hard to reel it in. But despite the odds, the two really hit it off and their friendship grows.

As Denver becomes more comfortable with Ron, he shares his tragic life story. We then meet a young Denver in rural Mississippi where he is being raised by his invalid grandmother. After her untimely death, he is sent to a farm where he picks cotton unaware of the civil rights movement or anything else happening in the world. When he decides to escape the cotton fields, he robs a bus and gets sent right to prison. Denver’s heart hardens and he doesn’t stand a chance of succeeding in this world with so many disadvantages in his path—until his encounter with the Hall family.

Just when things are going so well, the story takes a sharp turn when Deborah is diagnosed with cancer. She had been the light guiding the way of Ron and Denver’s friendship, but without her, what will become of the two? Having not read the book, I was completely unaware that Deborah’s illness would become central to the story.

What can sometimes happen with an incredible true story is that it is so unbelievable that it doesn’t seem real. Ron and Denver’s story deals with infidelity, poverty, racism, homelessness, alcohol addiction and cancer in just under two hours. That’s an awful lot of issues to cover in a short amount of time. So much of this story is about complex relationships between characters and their thoughts and feelings—that can be a challenging thing to show on film. Many of the scenes become condensed and feel awkward and contrived without any room to breathe. Native Texan Renee Zellweger is lovely as Deborah and Greg Kinnear does a fine job of portraying the not always likable Ron. I was surprised that Djimon Hounsou was chosen to play the older, street worn Denver until I found out that he’s really in his ‘50s. Hounsou (with some added makeup to age him a bit) does a great job of showing the many sides of Denver. Still, I feel like a lot of Denver’s story was left out and his transition from violent bat-wielding guy to lovable wisdom speaking man is extremely sudden. While I love the idea of Hollywood producing important films full of grace that aim to lift our spirits, this particular one did not fully deliver as I had hoped. Deborah’s message about a little bit of kindness going a long way is inspiring and it really is a beautiful and heartfelt story. Unfortunately, the film just didn’t do Deborah’s life story true justice. It’s by no means a terrible film, I just think it had the potential to be so much better. So my recommendation is if you really want to be entertained and uplifted, go buy a copy of The Hundred Story Home by Kathy Izard—you can thank me later!

A Smarty Guide to The Great Wolf Lodge