My Little Pony: The Movie
Directed by: Jayson Thiessen
Rated: PG (I can’t even fathom why this was not rated G)
Run time: 1 hour and 39 sugary sweet minutes

Because I take my love of movies extremely seriously, I sometimes venture out to films that aren’t exactly in my wheelhouse in order to broaden my horizons. I didn’t really want to walk into the theater of My Little Pony all by myself, so I coerced my 12 year old daughter to join me by promising a nice lunch date afterwards. Besides, she loves horses and once upon a time watched the TV series about these sparkly high-pitched voiced magical creatures so why not? After all friendship is magic! 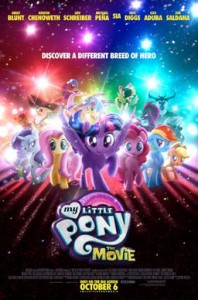 Ponyville is preparing for their first ever Friendship Festival hosted by Princess Twilight Sparkle. She is joined by her besties Rainbow Dash, Applejack, Pinkie Pie, Fluttershy and Rarity. Together, these are the “Mane 6” (get it? horse humor!) that are featured in the TV series. The ponies work together to finalize the details for the big event, even booking the famous Songbird Serenade (voiced by singer Sia) for the evening. Unfortunately, things go horribly awry with the arrival of the villainous Tempest Shadow, a bitter unicorn who turned to the dark side when her horn was broken. Tempest Shadow (voiced by Emily Blunt) freezes Ponyville’s leaders Princess Celestia and Princess Luna and attempts to also freeze Twilight Sparkle, but Twilight manages to escape in the nick of time. She then begins a long (and I mean long!) journey with her fellow ponies to find help and save the day.

Along the way, Twilight and the gang meet up with a con artist cat named Capper (Taye Diggs) and a bunch of parrot pirates that do not like being ruled by the evil Storm King (Liev Schreiber). The ponies head to Mount Aris to find magical hippogriffs that might be able to help them. However, the hippogriffs have been hiding from the Storm King by transforming themselves into seaponies by using a magic pearl. Say what? Twilight has the brilliant idea of having her friends distract seapony Princess Skystar (Kristin Chenowith) while she steals the pearl. Unfortunately, that doesn’t go over very well (because stealing is wrong!) and not only does Twilight lose her chance of getting the pearl, but her friends are pretty disappointed with her bad decision making. Oh no! Can things get any worse? Why yes they can because when the ashamed Twilight goes off to mope by herself, Tempest Shadow kidnaps her and brings her back to Ponyville, friendless and alone. She plans to use the power of the three princesses to energize a magical staff that will give the Storm King limitless power—yikes!

Will Twilight manage to escape? Will the Mane 6 be reunited? Will friendship truly be magic? I know you are on the edge of your seat, but I don’t believe in spoilers. I will just say that in a film chock full of rainbows, unicorns and sparkly cutie marks good might just triumph. This ridiculous story is harmless enough and the importance of friendship is always a welcome message, but my biggest question is why do you need a feature film of My Little Pony? The ponies are animated exactly the same, the Mane 6 use the same voice talent, and the story isn’t so complex that it merits such a long run time. And believe me, with these ponies, a little goes a long way! This film seems like an opportunity to make some extra money and widen the audience base and just seems completely unnecessary. So if your child loves the ponies and you’ve got a rainy day and lots of time to kill, by all means pop an Advil and take your little one to the theater. Otherwise, just turn on the TV, pop some popcorn and watch a few episodes back to back of the series—your child will never notice the difference!

Charlotte Knights Flicks at the Field This Weekend...