As a kid you told yourself that you would never ever compare your childhood to your own child’s when the time called for motivational conversation. As your mom or dad began the dreaded statement, “When I was a kid…” upon seeing you move about the house aimlessly in the summer, your eyes rolled to the back of your head. When the perceived eyeroll was caught by that superior parental peripheral vision, you complained of something in your eye that was making you look up and then spent the next few minutes looking up at the ceiling while rubbing your eye. The wrong eye. Conversation turned one sided for a few moments as you studied the imperfections in the ceiling that you never noticed before – before the summer, before the eyeroll – while your mom or dad spewed out ideas. Something about a dust cloth, weeding, getting dressed… 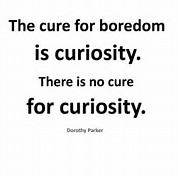 You then checked in with Boredom who was saddled up next to you at the kitchen table who was shaking her head “no” after your dad got to the word “encyclopedia” and something about learning. Boredom was a relentless friend who you wanted to unfriend but instead allowed to degrade your behavior down to silly noises, eating from the sugar bowl, looking for split ends, sitting in contorted ways (I guess you could get away with calling it yoga these days), studying back-to-school fliers while making yourself sick, and then back to looking at the imperfections in the ceiling and noticing that an array of bumps actually looked like a face. Your parents seemed to have a million terrible ideas on how to rid yourself of Boredom (dusting and weeding was supposed to make Boredom unfriend you). “I would never say that to my kid!” circulated throughout your stagnant grey matter.

Ultimately, most of us split up with boredom decades ago. Well the relationship just kind of slipped away without much to-do. A free moment became hard to find and you weren’t even sure what color your own ceiling was…that is until you had kids and mashed peas ended up on splattered on the ceiling – a ceiling that could use a coat of paint one Saturday when there was nothing else to do. Hundreds and even thousands of Saturdays then raced by and you finally called a painter because there was no free time to be had. You found yourself wishing for Boredom who seemed to now be a privileged friend.

Then we all did it. We wished a little too hard and the reunion happened, well indirectly. Boredom took a liking to our kids without giving us a glance. The long summer days lead friends in different directions and camp days ended all too early. So guess who showed up at the kitchen table. Boredom and our kids. And it’s funny to see the relationship unfold: overexpressed Disney show quality sighs, organic chip bags crinkling (who has a sugar bowl anymore), YouTube vlogs playing on forgotten iPads, complaints of finishing Netflix and all the levels on Xbox games, and running out of smoothie ingredients for the Vitamix. Summer days can be so rough. We want to eyeroll our own children but that would conflict with the parenting rule about kids mirroring our behavior.

The words, “When I was a kid…” then cascade out of your mouth while you look up “to think.” So what did we all do as kids, before the internet, before technology? After we were done seeing how deep we could make our voices directly in our mom’s ear and there was nothing left in the sugar bowl and nothing to watch on the four TV channels, we exercised our imaginations. Can I tell you how many hours were spent in the sandbox making mud boots, gloves, tea, pizzas, and even dog coats? My poor dog. When I was bored with that, I hosed myself and the dog down and got my horse out of the stable – my red bike. We adventured through mountains and streams and even outran some bad guys. And I even found myself reading the encyclopedias. Forts popped up all over the house while a few yardsticks were lost in the process (I learned how much weight they could withstand). My dog ended up in the forts sharing snacks with me. The closest I got to technology was the phone which I did spend hours on…actually talking to another person on the other end.

Then you remember the rest of the phrase, “When I was a kid…I got bored too.” No matter what options we have, all kids face boredom (however, I would like technology to be a less frequent boredom buster). Instead of reminiscing about when I was a kid and my mud stories (we don’t even have a sandbox), here are my comeback lines that seem to help them appreciate boredom (sorry dad, encyclopedias and (mom) dusting is not a strong comeback these days):

Here’s to a few more weeks of summer vacation! May our kids learn to embrace quiet moments and always discover curiosity in the face of boredom.

From the Smarty Health Corner and CEENTA: Keep your family’s eyes UV-safe