Home Entertainment Smarty Movie Review: Diary of a Wimpy Kid: The Long Haul
EntertainmentThings To Do

My five-year-old daughter and I had the opportunity to check out the new Diary of a Wimpy Kid movie this past weekend. This modern version of National Lampoons Vacation was a hoot to watch! The family road trip full of hijinks was played by Alicia Silverstone and Tom Everett Scott which took me back to my Clueless and That Thing You Do days! The kids in the movie, played by Charlie Wright (big bro), Jason Drucker (middle bro) and Dylan Walters (baby bro) did a great job. 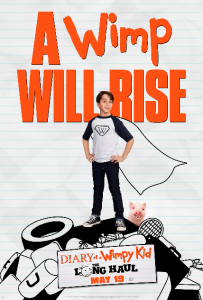 The mom wanted to the perfect summer road trip with her family which meant no electronic devices. This proved to be difficult for the two older kids and even the dad, who snuck away for work calls. Greg Heffley (middle brother) had ulterior motives to sneak away with his brother to a video gaming convention to capture a video with a gaming star to redeem his online presence, as it was recently ruined with a viral video featuring a diaper.

The family’s journey took them to many adventures including dumpy hotels, town fairs and ended at their Meemaw’s 90th birthday party. In the end the family had the time of their life and really enjoyed connecting with each other while being unplugged.

My daughter had a hard time with some of the car chase scenes but other than that thought it was funny and is now asking for a baby pig (you’ll see why)! The movie is rated PG is in theaters now.

From our friends at Pure Barre Myers Park: Say Hello to Summer with Confidence

From the Smarty Health Corner and Levine Children’s Hospital: Rooming-In and Pediatric Hospitalists

Why Kindergarten Teachers Want Your Child to Step...

The benefits of intergenerational experiences