Home Health Parker is Pounding Out Pediatric Cancer
HealthThings To Do

In November 2015, Allison and Jon’s oldest son, Parker, underwent a series of MRIs, which revealed a tumor on his spine. His diagnosis was an extremely rare glioneuronal tumor, more specifically a disseminated oligodendroglial cell-like leptomeningeal tumor, which had spread down his spine and up into his lower brain.

Parker is 8-years old. But other numbers are top of mind for his parents. 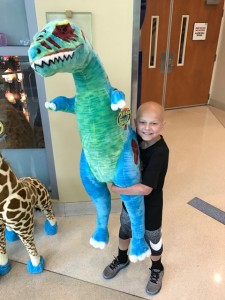 Less than 2% of Parker’s type of cancer occurs in children.
Only 4% of federal funding is directed toward pediatric cancer research.

What’s a parent to do when faced with one of your greatest fears, a sick child with no cure…? Well, if you’re the Cowherds, you start a Foundation with the love and support of family and friends.

This year, the Pounding for Parker Foundation, was launched as a non-profit organization dedicated to advancing research for pediatric cancer, particularly low-grade glioma tumors, and improving the quality of life of childhood cancer survivors.

Parker began chemotherapy in December 2015. After a few months, the tumor stopped responding to chemotherapy and was continuing to progress. He began a second type of chemotherapy regimen which he has just concluded after 10 cycles. The medicines he is receiving were developed more than 30 years ago – with no advancements since.

Allison says “Even with the numerous hard-working passionate pediatric-based foundations, there is still only 4% of federal cancer funding going toward pediatric cancer research. And, with the dollars that are allocated to pediatric cancer, only a tiny sliver goes to rare diseases. Parker will have to manage his tumor over the course of his life. Not only are were trying to gain research dollars to fight his cancer, but we are driven to help patients maintain a good quality of life in their future. The chemotherapy drugs that Parker is taking are more than three decades old; they are helping children live longer, but are causing other health-related issues later in life.”

Parker has a great smile and loves to strike up a conversation with friends and strangers alike. He has missed a lot of school, lost his hair and doesn’t quite look the same as he did before starting chemo. Parker’s Dad says “Parker wants to be treated just like a normal, eight-year-old boy. Where we’ve found that people in the community have been the best is when they understand his limitations, but still include him. Parker has always been open to talking to his friends about why he’s lost his hair. He’s very good at explaining how the chemotherapy medicines work. Just a few days ago, his teacher showed his class a picture of him with hair (he’d lost it all before school started this past Fall). His friends couldn’t believe it – it made Parker feel good for his friends to see past his bald head!”

The Pounding For Parker Foundation is hosting two events, Pound Out Pediatric Cancer Community Event next Sunday, June 4, 4:30 – 8:00 p.m., in Old Town Cornelius. Everyone is invited to join in the festival and enjoy local vendors and organizations, food trucks, firetrucks, craft beer, live music, raffles, an awesome silent auction and more. The second event, the Inaugural Pounding For Parker Golf Tournament is the following Monday, June 5 at NorthStone Country Club. There’s only a few spots left to register to play golf, but tickets are also available for the dinner-only that includes access to the silent auction.

“The response from the community and our friends and family has been overwhelming; it has brought us joy and allowed us to keep our focus on the future and what we can do, instead of what we can’t control. We can’t wait to see everyone at the Lake this weekend!” says Parker’s mom.

If you can’t make it to the events this week, click here to learn more about the Foundation and how it’s raising awareness for pediatric cancer.

Fitness Friday: Am I Damaged Goods?

From the Smarty Health Corner and CEENTA: Battling...

When do You Take Your Child to the...

The Smarty Scoop on LASIK with Dr. Mozayeni...

Will this be your family on Thanksgiving? Thx,...

Flying with Kids out of Charlotte on USAIR

Smarty Scoop On Weekend Events May 24-26