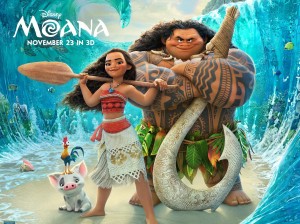 Moana is Disney’s latest foray into the realm of princesses—although as a Polynesian Chief’s daughter she’s technically not a full-fledged princess but she’s pretty close. Moana lives with her family on a remote island and is raised to one day assume the role of the island’s chief. However, Moana is constantly drawn to the lure of the ocean and wishes to explore beyond the reef—which is strictly forbidden by her father. In an interesting twist for a Disney movie, Moana’s mother is still alive. Unfortunately, she barely registers as a character so I’m not sure that this actually counts as progress from usual dysfunctional Disney family dynamic. Moana seems resigned to live her life on land until a mysterious darkness creeps onto the island. Suddenly, coconuts begin turning black and vegetation starts dying. Moana’s grandmother explains on her deathbed the reason the island is in trouble. The legend states that demi-god Maui stole the jade stone heart of life-giving goddess Tehiti and the only way to stop the darkness is by bringing Maui back to Tehiti to replace the stone. Grandma knows that Moana is destined to be Maui’s guide as she witnessed the ocean delivering the heart stone to Moana as a baby.

To save her island, Moana defies her father and sets sail with the heart stone and comic relief sidekick rooster Heihei. She is determined to find Maui, a huge demi-god voiced by Dwayne “The Rock” Johnson. Maui is an arrogant guy who has been stranded on a deserted island without his magic fish hook that allows him to be a shape-shifter. Maui’s emotions and history are displayed by the many tattoos that cover his body and they act as a guide and conscience to him. He reluctantly agrees to travel with Moana to first reclaim his magical hook and then return the stolen heart to Tehiti and save the world.

On the positive side, Moana is a terrific character. Voiced by 14 year old newcomer Auli’i Cravalho, Moana is brave, resourceful and smart. She is supposedly a more realistic body type owning to her Polynesian heritage but let’s be honest—she is still a slender gal without any lumps or bumps and she’s gorgeous. It is also refreshing to enjoy a princess movie that doesn’t have a romantic component—Moana and Maui’s relationship is strictly platonic even as their friendship grows over time.

My first disappointment with the film is the music. I understand the intent to create a more Pacific Island sound, but when you head to a Disney musical you expect gorgeous operetta-style songs like “Part of Your World” from The Little Mermaid or “Belle” from Beauty and the Beast or of course “Let it Go” from Frozen. While the song “How Far I’ll Go” is pretty great and fits in nicely with other Disney favorites, others just didn’t work for me. This really surprised me as Lin-Manuel Miranda, the genius behind Broadway’s Hamilton wrote many of the songs. The tunes weren’t necessarily bad, they just weren’t what I hoped for or expected.

The biggest disappointment of the film was the lack of a clear and entertaining villain. When you think of great antagonists like Ursula the Sea Witch or Gaston, you’ve got someone fun to root against. Here, the enemies are some crazy coconut pirate creatures, a giant crab that gives off a strange David Bowie vibe and an emotionless lava monster named Te Ka. I missed having a vibrant bad guy with a strong personality to pit against Moana on her quest.

While the film has its issues, your kids will still love it. If I didn’t have such stellar movies to compare Moana to, I might have enjoyed it more. This was especially true as right before the film a preview of the upcoming live-action Beauty and the Beast was featured (out March 17th). It looks fantastic and reminds me how often Disney gets it right. Still, you know you’ll take your kids regardless so head to the theater with reasonable expectations and you’ll have a fine time.

Will this be your family on Thanksgiving? Thx, Holderness fam!