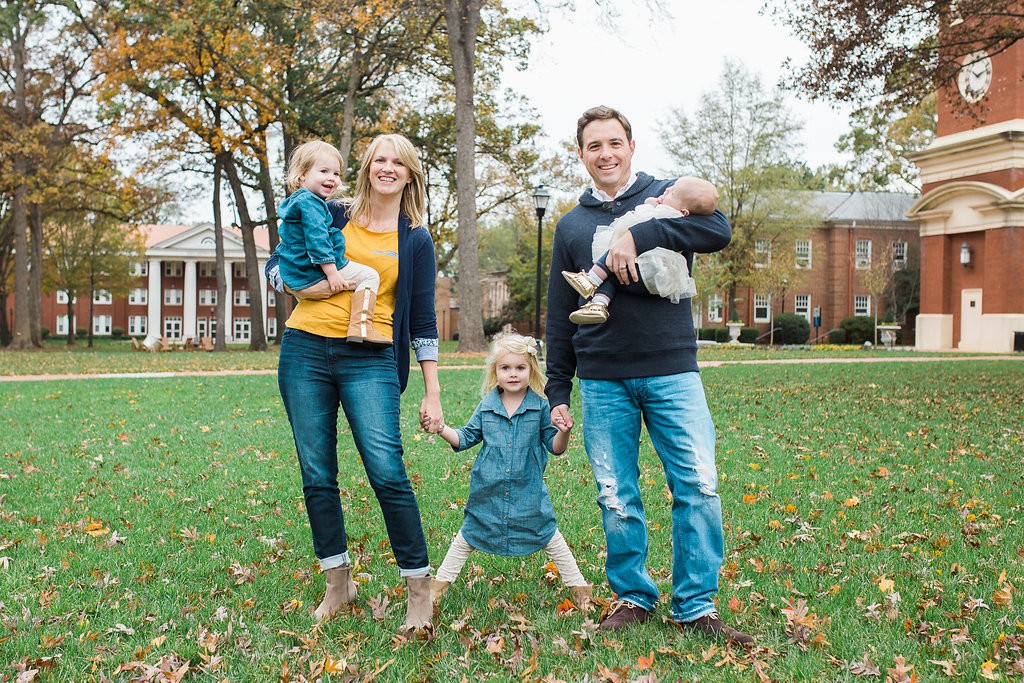 I’m so excited to introduce you all to my friend, Jenny Jones. While we’ve been neighbors for several years, I only recently learned that she was a passenger on flight 1549 when we started discussing the movie Sully. I guess being in a plane crash isn’t something that normally comes up in casual conversation! While this event is a small part of Jenny’s life, I had to get the full details after seeing the terrific film based on the Miracle on the Hudson.

Married to: Tray 7 years (We got married May 30th after the January 15th crash)
Children: Annie almost 5, Lucy 2.5 and Maggie 1
Years in Charlotte: Born and raised in Charlotte
Alma Mater: Appalachian State
Occupation: Previously a Risk Manager until Annie was born in 2011. Now I am the president of crumbs, diapers, boo boos and snuggles!

So I can’t believe you have lived in our neighborhood for so long without me knowing that you were on flight 1549! How did you and your loved ones feel about a movie being made? What was it like seeing the movie?

I was excited and anxious about the movie. When I heard they were going to do a movie on Sully, I was excited for him. He is a very humble person who did an amazing thing, he should be given praise! With so much negativity around us in the media, it’s always nice to see something positive (or at least a happy ending). I planned to see the movie with Tray first but ended up asking my mom, brother, sister-in-law, sister and brother-in-law. They all came with me. Watching the movie was more intense than I anticipated; I shed quite a few tears. But overall I enjoyed watching the story unfold. Many of the images shown in the movie from video clips off of the piers to pictures taken of the plane floating were ones I’ve seen a million times yet never get old. The idea of a plane floating down the Hudson River is still one that baffles me.

Did you think the movie accurately portrayed the experience?

Yes I do. In fact, I thought for sure they would add a “Hollywood” touch to the movie, but I didn’t think that at all by the end.

Did you have any idea about the engines failing or that there was a problem? Or were you unaware during those few minutes until the pilot instructed you to brace for landing?

There was no question something was wrong with the engines. It was SILENT which is not something you should experience on a plane. The passengers were also really quiet, almost instantly. Some were calling loved ones, some were talking about seeing flames out the rear of the engines (but only a few could actually see it), the rest of us just sat there in shock. From take off to landing in the Hudson, there was only something close to 3 minutes, so there wasn’t a ton of time to react.

You said you didn’t think you were going to die – were you calm the entire time? Was there any point where you were really scared?

I was definitely scared the whole time, I just didn’t consider dying. I thought it would be a tough landing back at the airport and that it might be an ugly sight to see, but truly didn’t think it was over for me. I was in seat 10D which is an aisle seat in the first of two exit rows in the middle of the plane. The man sitting at my window exit told us we were over the river and he gave a countdown to hitting water, starting around 30 seconds. When the flight attendants started with the “brace, brace, heads down stay down” chant, we all looked around at each other wondering what in the world that meant. We figured it out quickly.

With the water landing, the rear passengers were more submerged—where were you sitting and how wet did you get? Were you absolutely freezing?

Seat 10D as I mentioned above, so I was about the 4th person out on the plane’s right wing (on the left in the pictures). The water was FREEZING! The very next day there were huge chunks of ice floating in the river. Wouldn’t have been a good day to land a plane.

You were engaged at the time — how quickly were you able to contact Tray and your family?

I was one of the first people on a ferry boat. I was so confused about where I was, what boat I was on (thought it was a rescue boat until I realized there were other passengers). A ferry boat passenger offered her phone so I called Tray. He didn’t answer at first, but I called right back. He was really confused. I hadn’t cried until I heard his voice. He said “honey, its hard to understand you it sounded like you said you were in a plane crash”. He called my family. I was able to call later after getting off of the boat.

What were the logistics like of getting home after that?

When we got off the ferry boats (some went to NJ some to NY, I went to NY), I met a girl traveling alone for work like me, so we sat with each other. She randomly found three men traveling from her husband’s company. So the 5 of us stuck together. They had their phones in their pockets, so I was able to call Tray again. Their company sent a charter flight to get us, I flew home on a single prop plane with 4 strangers! I drank a lot! Tray and my family were all waiting for me at Wilson Airport (the small plane landing strip near airport), I think we landed sometime around midnight.

Have you kept in touch with other folks on the flight?

At first, it was neat to meet up with people for cocktails, plane events, etc. but after a few of those I needed to take a break. Katie Couric did a show here in Charlotte and a very large group of us went to the Oprah show when she had Sully. That was fun! There is still a group that is still getting together, but it was too much for me. I needed to move on with my life.

Have you visited the plane at the Carolinas Aviation Museum?

I have not, but now that I’ve seen the movie I think I can handle it!

Do you plan on telling this miraculous story to your daughters?

Yes, when they can understand.

When things get stressful (like your house remodel) do you ever say to yourself “I survived a plane crash—I can handle this!”?

How many cocktails did it take to get you back on a plane?

It took Xanax at first and saw a therapist to learn how to calm myself. I finally ditched the xanax but I still had a really hard time. I did it anyway. Now with three little kids, its been 3 years since I’ve been on a plane. Time to try again!

>So since you are amazing and great under pressure you should have no problem with the lightning round:

Favorite family restaurant: Pizza Peel Plaza Midwood!!!
Favorite date night spot: Good Food on Montford
Best place to entertain the kiddos for a couple of hours: Freedom Park
Best guilty pleasure: Cookie or Brownie batter, I know I know the eggs!
Celebrity crush: This is the hardest question of the interview, I can’t say that I have one.

Smarty girls in Lilly scarves this week, in...

Easy eats with Giggle Bites, plus a giveaway!