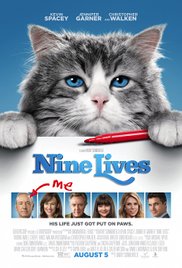 When I first heard about the movie Nine Lives, I wondered why two-time Oscar winner Kevin Spacey would agree to play a talking cat. But I figured that with a terrific cast including Jennifer Garner and Christopher Walken and pedigreed directer Sonnenfeld at the helm, there must be some reason to watch this film, right? Sadly, I was wrong and this cat movie is purrfectly awful.

This cliched story features selfish dad Tom Brand (Spacey) who ignores his loving second wife Lara (Garner), adorable daughter Rebecca (Malina Weissman) and faithful son David (Robbie Amell). He’s too wrapped up in running his multi-million dollar company and building his crowning achievement—the tallest building in North America to care about his family. He’s so busy that he has to be reminded of his daughter’s birthday, so in a pinch he drives to a strange pet shop to pick up a cat as a last minute present. The store owner is Felix Perkins, a mysterious “cat whisperer” (Walken) who helps him select a cat named Mr. Fuzzypants. But then there’s a problem at his beloved building site, so instead of heading to his daughter’s party, Brand goes to the building’s roof during a thunderstorm. Bad idea! Lightning strikes and while Brand’s body lands in a coma, his mind inhabits magical Mr. Fuzzypants. Are you still with me?

While being turned into a cat is bad enough, Brand also has to deal with the threat of his scheming board members double crossing him and turning his company public while he’s comatose. Even worse, if he doesn’t behave and start acting like a real cat, Felix threatens Brand with getting fixed. Yikes! Brand decides to be a good kitty and endures endless feline humiliations while watching his family grieve over his absence. Will Brand realize what he’s missed while being a self-centered workaholic? Will a changed heart magically return him to his human form before time runs out?

I can suspend my disbelief and go with the whole man/cat concept. That’s part of the fun of going to the movies. But there are so many holes in this story, it looks like Mr. Fuzzypants took his claws to the script. Why would sweet Lara ever marry this jerk in the first place? Why does Brand’s nasty ex-wife Madison (Cheryl Hines) hang around so much? How does daughter Rebecca figure out that her new cat is actually her dad? I also wonder who the target audience is for this film. While it’s billed as a family comedy, there were several scenes that some parents might not find appropriate for their younger kids. Ex-wife Madison is a lush and at one point Mr. Fuzzypants gets hammered on scotch. The whole cat castration conversation was cringe-worthy and made me hope my daughter didn’t start asking questions. At one point Mr. Fuzzypants watches Lara begin undressing and I just hoped that scene would end quickly. But the most inappropriate part of the story involves an assumed suicide attempt—not really ever something to joke about and definitely not something I want my kids to see. Honestly, it’s amazing this film ever made it to the theaters.

All this being said, my kids actually enjoyed it. Of course, they like watching funny cat videos on YouTube so to them this was sort of an extended version of that. If talking animals are your thing and you want to see it done right, check out Babe (1995), a terrific film starring James Cromwell about a little pig that wants to be a sheep herder. The 2006 live-action version of Charlotte’s Web is also a terrific pick for a beautiful story with a fantastic message and plenty of adorable farm animals. Those films are paws down far superior to the awful Nine Lives.

Smarty Book Review: The Girl on the Train

Smarty tips for the best couple’s staycation EVER