Home Things To Do Smarty Movie Reviews: What’s Old Is New Again
Things To Do

Summer movie season is synonymous with sequels (say that three times fast!) and we all know and expect that. But this year has been especially unique because Hollywood is reaching WAY back into the movie archives to reinvent popular flicks from our youth. The summer 2016 box office is looking a whole lot like decades of old and I’m not convinced that it’s a good thing.

In case you’ve been trapped under a rock for the past six months, the new all-female Ghostbusters opens this weekend. I’ll definitely see it, and I’m curious to find out if director Paul Feig can recreate the magic of his previous female cast successes (Bridesmaids, The Heat). But in all honesty, I wasn’t the biggest fan of the original film. Feel free to boo me, but I recently watched the 1984 version with Bill Murray and Dan Aykroyd again and while some parts were funny, it’s still a pretty ridiculous film. If you plan on watching the original with your kids, don’t forget that there are some scenes that are pretty sexual and inappropriate for younger ones!

Anyhow, let’s take a look at some of the newest oldies that are currently playing: 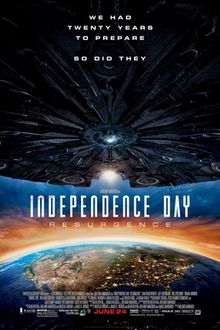 Independence Day: Resurgence
Directed by: Roland Emmerich
Rated PG-13
Run Time: 2 hours (you sure can blow up a lot in 2 hours!)

The evil aliens from the 1996 blockbuster Independence Day once again decide to attack Earth in Independence Day: Resurgence. The original film was a solid summer smash featuring Will Smith as a cocky fighter pilot. Smith added much needed humor to the disaster flick which featured eye-popping scenes of world landmarks being blown up and lots of devastation. While Smith does not return to the new film, many other cast members do including Jeff Goldblum as Dr. David Levinson, Judd Hirsch as his father Julius, and Bill Pullman as former President Whitmore. Just as the world is celebrating 20 years of alien-free life, the squid-like bad guys return. Liam Hemsworth attempts to fill the cocky pilot role as Jake Morrison, but as good looking as he is, he’s just not as fun to watch as Will Smith. Smith’s fictional son Dylan (Jessie T. Usher) fights alongside Jake, and he too fails in the charisma department. While the special effects have greatly improved in the 20 years since the first movie was released, the story just seems a bit tired and unfocused. They even attempt to recreate President Whitmore’s rousing speech from the first film with another big speech, but even that doesn’t generate the same patriotism and emotional lift the film needs. Don’t get me wrong, your teens will love it but it just pales in comparison to the original film. 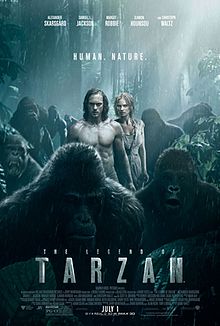 The Legend of Tarzan
Directed by: David Yates
Rated: PG-13
Run Time: 1 hour 50 minutes (many of those minutes with a shirtless Alexander Skarsgard!)

Speaking of originals, I don’t even know which film to compare with The Legend of Tarzan as there have been so many versions of this story dating all the way back to 1918! Do we go with the fantastic 1999 Disney cartoon starring Tony Goldwyn and Minnie Driver as the voices of Tarzan and Jane? Or do we go back to the 1984 Greystoke version starring Christoper Lambert? The only reason to see the ‘84 version in my mind is to watch Andie MacDowell as Jane. Apparently her accent was deemed too southern so once filming concluded they dubbed over her entire performance with Glen Close’s voice! Anyway, there have been countless adaptations of the Tarzan legend so I was a bit surprised that Hollywood would revisit the story. Of course with CGI, you can create fake lions and gorillas instead of using real wild animals and you can swing through fake trees on fake vines so why not give it a shot?

This version of the story begins with Tarzan (Alexander Skarsgard) living a civilized life as Lord Greystoke in London with wife Jane (Margot Robbie). He is asked to return home to Africa on a goodwill tour by Belgium’s leader Leon Rom. Of course, since Rom is played by Christoph Waltz, you know he’s a really bad guy (honestly has this man EVER played a good guy?) This is actually all a ruse to kidnap Tarzan and turn him over to his enemy in exchange for lots and lots of diamonds. Long story short, Jane gets kidnapped instead, so Tarzan fights to save her and his beloved jungle. What surprised me was that while bits of the origin story were told in flashback, the majority of Tarzan’s story wasn’t really included. We see him meet Jane, but don’t see how their relationship builds. It’s really a new story based on an old legend. While the special effects were impressive, director David Yates (of Harry Potter fame) uses lots of odd close up shots that I found very distracting. The dialogue was also a bit cliched and stale. The one bright spot in the film was definitely Skarsgard’s abs. When he first took off his shirt to fight a gorilla, there really was a collective gasp in the audience. After that fight, he remains shirtless for pretty much the rest of the film. For a hilarious NSFW review of Skarsgard’s abs, read here.

If aliens and an ape-man aren’t enough nostalgia for you, remakes of Ben-Hur and Pete’s Dragon will be coming out in August. Maybe this fall Hollywood’s screenwriters will get busy and come up with some fantastic new concepts for us to enjoy in the future. Here’s hoping!