Have you caught that HGTV show “Tiny Houses” yet? 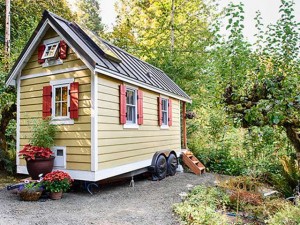 They’re SO cute, and so genius in design, production, and architecture, but…

Is there anything more millennial than a tiny house?

And is there anything more untouchable to a Gen Xer?

Not because we (Gen X) wouldn’t love to pare down. Who wouldn’t? The idea of living as carefree as those tiny house dwellers would make anyone want to sell it all, suck in, and live shoulder-to-kitchen-counter any day of the week (they’re always reading in hammocks – never mind the fact that as I age, hammocks make me as nauseous as a Saturday-night-tequila-shot-on-Sunday-morning but ah! They get to lie down and read!!). It sounds completely magical. But here’s MY question (coming from a Gen X mom-of- four):

Where is all of their stuff?!

No, seriously, where IS it all?!

I know these peeps didn’t get to this stage in their lives without “baggage.” Where are their report cards, trophies (I know they have a zillion seeing as they’re the “trophy generation”), precious Lego sets, Dish It Out masterpieces, posters of Justin Bieber, lip glosses, water bottles (SO! MANY! WATER! BOTTLES!), baseball cards, old soccer jerseys, textbooks they can’t part with, artwork, favorite stuffed animals (times 1000), yearbooks, and school photos?

Where is all of their stuff that they collected as kids?

Then it hits me: their parents have it.

Their parents still have their stuff.

These tiny house people didn’t sell or donate it all. Their “memorabilia” is in their parents’ attics, their garages, and their spare bedrooms. It’s still hanging on their walls, collecting dust on bookshelves, and blocking entrances and exits.

And, seeing as I AM so obviously a Gen Xer (just a mere three years from millennial status, but somehow beer gardens and #SundayFunday aren’t the same in a minivan), I have to be completely honest. These tiny houses scare me. No, they terrify me. I watch the show in fear that the Tiny House movement sticks and in 10-15 years, not only will I still have all of my kids’ stuff that I didn’t want in the first place (sorry Dish It Out!), but I’ll never actually get a dinner invite as reciprocation for the millions of meals I made because we won’t both fit in the tiny house (and I know FOR SURE I can’t eat in a hammock).

And here’s the crazy part: Gen X is sandwiched between two ginormous generations. Experts say there are 80 million Baby Boomers and 78 million millennial to our mere 46 million-member Gen X tribe. Our Baby Boomer parents are aging and probably downsizing, so we’re about to inherit A LOT of China sets. Our kids (some of them are actually millennials!) are aging and multiplying, and despite the paperless movement, they’re magnets for “stuff.” We were stuck with oversized plaid shirts and baggy jeans in high school, and now, my poor Gen X sisters and brothers, we are STILL in a literal crap shoot…kinda like those tiny house peeps during tornado season.

I really need a five-year follow up to the “Tiny Houses” show  – I have to see what happens when the tiny house millennials start marrying and multiplying (it WILL happen – there are beer gardens and hammocks involved!). Will they build multiple tiny houses? A compound of sorts? Or will they follow the scent trail left by their junk and wind up back home?

Support group meet-ups at Container Store sound good to you?

Cabinets by Design (and they are offering readers...