Thinking back to my own childhood summers, I recall sitting on my bedroom floor. While the space around me was quiet and my body still, my mind began to wonder and explore. As I dove into my thoughts, another world opened up to me. From there, I would spring into action and into my world. The world that I loved immersing myself into, the world that was often sidelined during the school year.

Growing up, I never went to one camp. Not one. When we weren’t traveling, I was home. And in that space, I created my own world. My bike became my horse more times than I can count, taking me through pastures, far-off places, and endless stories. I asked my horse to go faster while peddling as fast I could around my yard. We jumped over streams and fences until we could run no more. I would then lead her to the barn, telling her I would return the next morning. I would then lie in my bed, imagining what it would be like to be on a real horse during all those adventures. 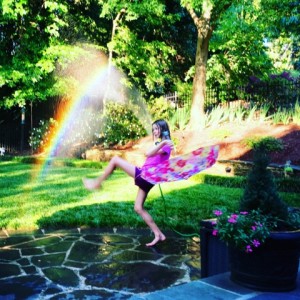 Blankets became rafts, indoors and out. Sometimes I was stranded for days, hungry and not sure when I would find shore. Other times, my sister would join me for a feast while we floated down river. The water would splash onto the raft, as the currents sped us along. I still remember the larger crocheted holes serving as leaks we had to repair.

Our entire basement became one massive fort, where we were campers in the deep woods. When we heard the enemy coming near, we would move quietly into the secret barracks- a small fabric covered table within the fort. Lighting, fans, food, books, games, and other supplies were all brought into the compound. We never knew when we would have to breakdown and move to a new location.

In the heat of the summer, I brought my entire Barbie Dream House outside. I dug a hole and lined it with plastic to create an in-ground swimming pool. Rocks and branches were collected to create a horse pasture, yard, gardens, and roads for the cars and horses. With a string tied to the front of my Barbie jeep and horse trailer, I pulled them around the yard, pretending I was Barbie driving the car.

My imagination was set free in those summer months. As I got older and outgrew pretend play, I turned towards writing and art. I filled journals, sketched until midnight and beyond, and made mixed tapes. I even played my cello when I didn’t have to. I looked at every book in the house, which opened my mind to other interests. I flipped through the entire medical encyclopedia multiple times, while picking up books of poetry. 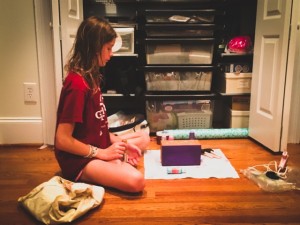 Or course I saw friends, but it’s the space where boredom met creativity that is so important. Boredom is necessary and serves a crucial role in our children’s lives. Boredom is also becoming a scare resource, as iEverythings step in too quickly to fill these blank spaces. I can’t tell you how happy it made me to reflect on where my imagination and creativity took me as a child. It was like visiting with old friends because they felt so real. They were real to me. And I want my children to have the same places to go back to and visit when they get older. More importantly, I want them to discover who they are, who they want to be, what talents and interested they have, while sitting in boredom.

My thoughts here must have reached my daughter without saying a word. As I turn around, I see her painting a box for her ukulele materials. Her school challenged every student to complete a summer project. The list of suggestions was almost two pages long-she chose learning to play the ukulele. I love how she became bored while I was writing, went into a quiet place, and sprung out with creativity. While creativity doesn’t come easily to every child (like my son), we are fortunate to have plenty of recourses and lists to print off and hand to them. I say print intentionally because the allure of the internet is too great when the objective is just the opposite.

Our children are flower buds who are on their journey to blossom. If we nourish and water them, while leaving them to grow by themselves every now and then, they will blossom into something that they might not have even known existed within themselves. If we are constantly holding them and shaping their world, they might miss out on fully growing to their full potential.

Smarty Giveaway: Win a Four-Pack of Tickets to...

Fairy Tales, Princess Dresses, and a Cup of...

love this article! Boredom is an essential part of childhood that, unfortunately, many children are just skipping over. The pull of screen devices to fill every moment of every day takes something valuable away from our children. Not only is the amount of time spent on screens alarming, but the content is often not worthy or beneficial for our kids. Parents, make intentional decisions around your child’s screen time. Let them be bored! Let them read, make forts, explore cooking, use hammers and nails or go for bike rides to the park. They deserve this time!