Home Events Smarty Alert: The Kindermourn Hope Floats Duck Race is this Sunday!
EventsHealthThings To Do 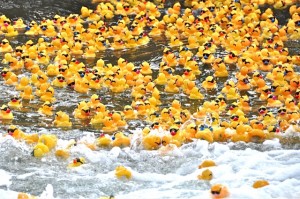 Mark your calendars, Smarties, KinderMourn’s Hope Floats Duck Race is this Sunday, May 1, at the U.S. National Whitewater Center. Kindermourn is a wonderful organization that supportsthe cause of comforting bereaved parents and grieving children.

The 12th annual event from 2 to 4:30 p.m., rain or shine, will host thousands of local Charlotteans for live music, family-friendly activities and the signature duck race. The day’s wacky highlight comes at 3:30 p.m. as 15,000 yellow rubber duckies – each one “adopted” by a KinderMourn supporter – race down the rapids to the finish line. Among the prizes is $2,500 in cash if your duck finishes first. The real winner, of course, is KinderMourn, which counts on the duck race to raise 20 percent of its annual budget. This year’s goal: $135,000.

Ducks can be “adopted” at www.kindermourn.org. Severe weather such as a sudden thunderstorm is all that keeps the ducks from racing. The event is free. U.S. National Whitewater Center parking is $5.

The brightly colored ducks have come to symbolize the hope that the bereaved find in KinderMourn. Since 1978, the nonprofit has offered professional counseling, support groups, after-school and summer camps for parents who have lost a child, and children and teens who have lost a family member or friend. In 2015, more than 4,000 people participated in KinderMourn offerings. In addition, KinderMourn’s Helping the Hurt program was offered in 80 Charlotte-Mecklenburg schools, helping 1,200 students deal with a death in their family.

Each year, the duck race welcomes many who have benefited from KinderMourn’s services – families rekindling the fellowship that sustained them through hard times. KinderMourn helps couples like Casey and Sabrina Williams. Below Sabrina shares why they participate and form a team in memory of their son Noah Graham Williams. 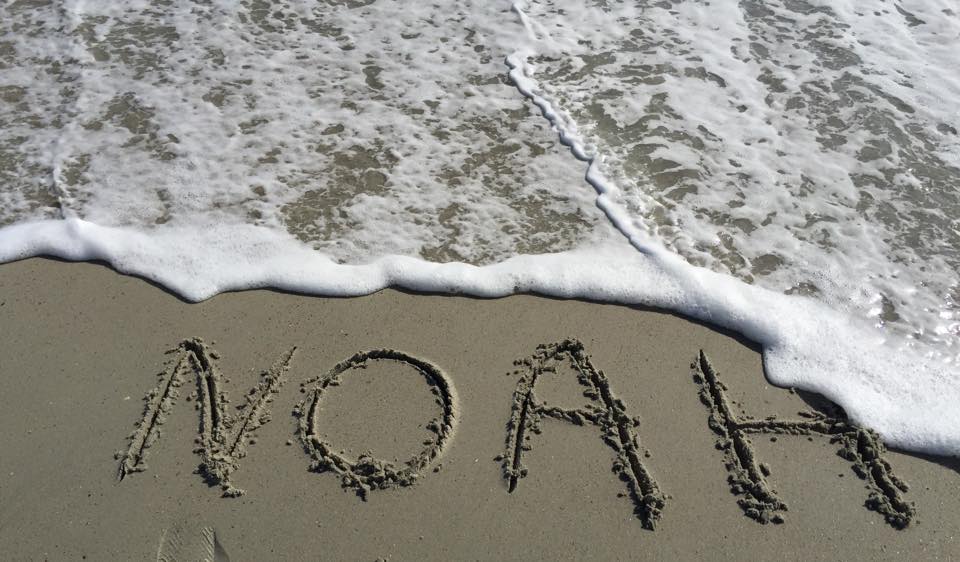 Our son, Noah Graham Williams, was born sleeping on March 11, 2015.  I was 38 weeks when we found out there was no longer a heartbeat.  A few days after coming home from the hospital we received a piece of mail addressed to the tenant of the home that my husband and I now own.  It was for the KinderMourn Duck Race that year.  We didn’t think much of it and tossed it aside.  On March 23, 2015 I started half days back at work.  I couldn’t stay at the house anymore but wasn’t really up for working full days (emotionally and physically).  Some of my friends at the office told me they started a Duck Race team for Noah.  I actually didn’t do much with it the first year. It wasn’t until October of that year that we were public with losing Noah.  I emailed it to a few close friends and family.  The outpouring of ducks that year was due all to my generous work family putting it together for us.

My husband and I decided we wanted to attend the event.  It was only a little over a month after losing Noah so we were not sure what to expect.  It was an overcast day and chilly out.  We stayed to ourselves as to not show how much we were hurting.  Seeing all the other kids and families was very difficult for us.  The main thing we took away from the event was that we knew when the time came, KinderMourn would be a place we would go if we needed counseling or wanted to get involved.

When the holidays started to approach we realized that was the time we needed KinderMourn’s services.  We had a one-on-one session and then started group in January 2016.  We finished group the week of Noah’s Angelversary.  Being a part of that support group has been a blessing to us and made us realize we are not alone and unfortunately there are way too many people out there that need KinderMourn’s services.
This year we have been very outspoken about the Duck Race and have invited numerous friends and family to attend.  We’ve put up a few signs throughout Charlotte and Concord.  We have also started a foundation, Noah Graham Foundation, Inc., in honor of our son and have started a team for the duck race.  We have shared the event on Twitter, Facebook, and Instagram.  I have also tweeted the event to a few local radio personalities and newscasters.  In the fall we are also hosting a race through the Foundation and proceeds will go to KinderMourn.

Our goal is to make sure people know about KinderMourn.  We want more people to know about these amazing services and know they have somewhere to turn.  When you lose your child it is hard to figure out which way is up much less know who to call for help.  If we can do anything to make people more aware of KinderMourn, we will do it!

We hope to see you on Sunday.

The Giveaway of the Year ~ Presenting the...

Smarty Scoop On Weekend Events May 17-19

Review of OWN YOUR LIFE