Erica McGee is one talented mom! I have known her for years, and she is always working on something new and exciting.  Not only does she write plays, but she also produces and performs in them.  She is a phenomenal singer (and a fantastic karaoke partner!) and even writes her own songs for her plays.  When she’s not writing or singing, she is working with kids in her children’s theater group.  If that’s not enough, she also has a terrific part in the new movie Miracles From Heaven and she is quite the scene stealer (see my review of the movie here)! I’m thrilled to introduce you to my friend Erica. 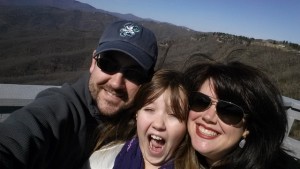 You have so many talents and are working on so many projects that it’s hard to know where to begin! When did you first realize that you could really sing?

I started singing when I was 6 years old.  I was trotted around by my Mom to anyone who would listen!  The first song I ever sang was “You Light Up my Life” by Debbie Boone.  I could sing before I could really talk!

How did you then move into acting and voice over work?

School!  I loved and was taught drama by wonderful teachers in elementary, middle and high school and I continued to study through college.I remember each of those teachers by name.  I was also a communications major so I studied broadcasting along side theatrical performance.  I loved both areas very much as I have always loved to write as well.

Miracles from Heaven is one of your biggest roles to date.  What was it like filming the movie?

A-MAZ-ING!  What an experience.  We shot my scenes in Atlanta for a week and I kept thinking, “How did I get here?” A very giving a generous set, director, crew and wonderful actors to learn from! 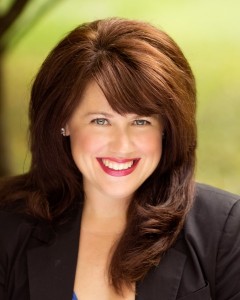 She is as nice as you’d hope she’d be.  So down to earth, beautiful inside and out.  Very easy to talk to.  A Mom first certainly.  What a nice thing to see.

Being so MEAN!  I play a mean church goer in the film, which hopefully people would say is a stretch for me! Beyond that working with Patricia Riggen (who also directed “33” this year) She was so open and let us try lots of things.  She seemed to really trust her actors and I felt so safe in that process. Also…the costumes and hair are always fun!

You are so sweet in real life.  How could you be so mean in the movie?

It was so great to get to play outside of myself.  It’s always good to be the villain now and again! It was hard to be so bad to such a sweet actress, but someone had to do it!

Your character plays an important part in the film, but she doesn’t have a name.  Did you give yourself a name and backstory? Did you even try to understand why your character was such a horrible person?

Jennifer teased us that we didn’t have names, she would give us a name sometimes…Lola or Barbara Jean…things like that.  It’s a true to life story, so you have to be careful with names in those types of films as you don’t want to accidentally point a finger at someone in that church simply because you liked that name for the character.  That’s pretty typical for a real life story.  I thought that my character was well meaning, just grossly misinformed.  She didn’t understand what the pastor meant or maybe the miracle caused her doubt which in turn shook her own faith.  No one likes to feel that way so maybe she was  trying to find a way to put those fears onto someone else.  Either way she behaved badly!  That much I know for sure!

Tell us a little bit about your fantastic show GRITS:

“Girls Raised in the South-GRITS: The Musical” is a show based on a book called “GRITS: Friends are Forevah” by Deborah Ford.  She’s from Alabama and originated that acronym and had best selling books all about us Southerners! The idea was first conceived in Charlotte at a bookstore in 2007.  I picked up this book, began reading it, and immediately had the vision of the show.  I saw four women of four different generations, telling these fabulous stories and singing about them!  I then started writing the music and adapting the book for the stage.  During that time I contacted the author of the book, Deborah Ford in Alabama via email.  She responded to me with excitement, we scheduled a phone conversation, had terrific chemistry and the project was instantly given the green-light!  Upon seeing the show, Deborah said, “I am thrilled that my books have inspired such a great musical project. It is so exciting to see the spirit of “GRITS” come to life right before your eyes!”

The show has a four woman cast spans age groups from a young woman in her 20’s to a mature woman in her 50’s.  Each woman is an individual storyteller and vocalist.  Every story carries a song. The musical consists of old-time ideals, such as reminiscing about “sittin’ on the front porch”, traveling with your best friends, celebrating with down home meals and the “Dos and Don’ts” of being a proper Southern gal.  Music covers a variety of genres from  do-wop to country, ballads and bluegrass.  Something for everyone.  Stories transition with meaningful quotes from famous “GRITS Girls” from all over the world and is amplified by vintage family photos that compliment each story and song via a multi media big screen.  I wanted everyone in the theater to be able to relate to someone they saw onstage, either themselves or a mother, sister or aunt.

This production has been touring for the past six years throughout North and South Carolina, Tennessee, Alabama, Georgia, Virginia and Florida.  After the success of that show, I developed “Cinnamon GRITS: Christmas in the South”.  It was based on my own family and friends stories I have collected through the years.  It two has a variety of styles of music mostly original with some holiday favorites and carols to sing.  We’ve also recently been touring “Cindabella: A Southern Fried Fairytale” which is a southern retelling of the classic fairy tale.  We have a Fairy Me maw and King Big daddy and Queen Big Mama who live on a peanut plantation and Cindabella and her step sissies live on a fruit farm.  My goal with southern theater is to have positive representations of our region on stage and off, to show the beauty and creativity and uniqueness of what it is to be southern.  I feel that’s something we really need right now.  These shows are also available for licensing now so others can produce them and I can see different interpretations in venues all over!  It’s really fun.

You an see all of our theater work at here and here.

You also have a gift with children.  Can you tell us about your summer camps?

My children’s theater group is called Playground Players.  We have two camps being offered this summer in the Southpark area.  “Vinyl Rewind: Classic Rock Show Choir camp and “Star Wars: The Musical” Musical Theater camp.  I love working with kids and we always have so much fun.  It great to watch them grow as performers or in some cases simply come out of their shells.  So much is learned by getting on stage with others and seeing what happens!

I used to coach Odyssey of the Mind teams.  Some of the kids were hesitant to perform at first, but I realized that these were the kids who benefitted most from performing.  It really was a huge confidence boost for them.  What are some of the benefits that you see from having kids perform?

Kids are able to see they can affect an audience through movement, voice and attitude.  That is a HUGE benefit in many areas of life.  It is also a great way to learn from mistakes and see that they don’t end you, you can go on and recover….also a good lesson for every day living.  Working together to create something is also a wonderful team building process that allows for you to grow in areas off stage as well as on.

And now for the lightning round:

You and Ryan both travel for work—how do you juggle that?  The calendar is your best friend!  Also sometimes, you just have to say, ” I need to do this” and the other one will understand and make it work.

Favorite things to do with the family? Antiquing, Charlotte Knights, Carowinds

Celebrity crush? Thor (the character not the actor) & Hugh Jackman

Favorite karaoke partner? (no pressure to name any blogger in particular….)  YOU Heather Gunter!  You are the Nancy to my Ann Wilson!

Summer trippin’ does a family good

Playing for Others hosts two great events to...

A Gift Truly From The Heart