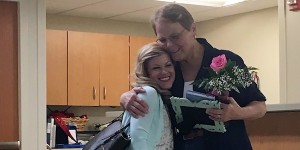 Happy Easter, Smarties! You’re going to love this heartwarming story from our friends at Levine Children’s Hospital. It was originally posted on their blog, and we thank them for the opportunity to share with Smarty Charlotte!

A serious illness put Carissa in the hospital for years. Her nurse, Barbara, never forgot the little girl – and decades later, the two reconnected.

For the first two years of her life, Carissa Thornburg’s home was the hospital. She learned to walk rolling her IV along in an orange baby buggy. “Outings” consisted of trips to the hospital pharmacy.

Starting life in the hospital wasn’t easy. But throughout her stay, one person was by her side: Nurse Barbara. Barbara Odom, a neonatal ICU nurse at Carolinas Medical Center, cared for little Carissa, who had been born with a rare condition that left her intestines twisted. For two years, she helped plan Carissa’s care and saw her almost daily.

“She was so small, and I knew it was my place to be by her side,” says Odom, who recently retired after 35 years in the NICU that’s now part of Levine Children’s Hospital. “In my mind, she was my baby.”

Now, decades later, Barbara has not forgotten Carissa – and Carissa, now 30, had always wanted to reconnect with the nurse who’d been such an important part of her early life. So when Carissa got a Facebook message from Nurse Barbara 28 years after she’d left the hospital, asking if she might be the same Carissa the nurse had cared for, she was stunned. 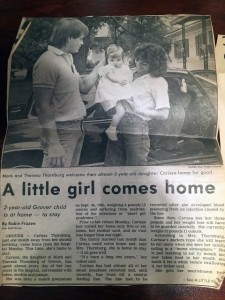 “I broke down in tears,” says Carissa. “I couldn’t believe it after all this time.”

Soon after, the pair enjoyed a sweet reunion at the hospital where they’d spent so much time together decades before. They thumbed through the giant scrapbook documenting Carissa’s first couple years of life, laughing and recalling long-forgotten details.

Like Barbara’s memory that some nights, when Carissa was fussy or couldn’t sleep, she’d stay up with the nurses while they did office work. Or the amusing recollection that the little girl had loved seeing the hospital’s ventilators and playing with the trash cans.

Through it all, Barbara was there. “Every day that I was in the hospital, my grandpa took a picture,” says Carissa. “And Barbara is always at my side.”

Odom says everyone in the hospital knew little Carissa, and it was a true team effort to get her well enough to leave. “When it was finally time for her to go home, they had to tell me that she wasn’t my baby and I couldn’t take her home!” laughs Barbara.

The pair says now that they’ve been brought back together, they won’t lose touch again. “I had always wanted to meet her,” says Carissa. “It was God sent.”

Smarty Alert: It’s not too late to sign up for Spring Break camps at My Gym

Get your fitness game on BEFORE the holidays!

From the Smarty Education Corner: Strategies for Summer...

From the Smarty Health Corner and CEENTA: Shining...