I’ll See You In Paris, by Michelle Gable, is entrancing historical fiction, blending star-crossed romance with a startling account of one of the 20th century’s most fascinating women. Fair warning: it takes quite awhile before anyone actually gets to Paris: most of the novel is set in a quaint village in the English countryside, alternating between the 1970s and the present day as it relays the (mostly) true story of the roguish Duchess of Marlborough, Gladys Deacon. 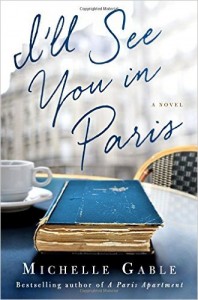 The duchess’s quirky, colorful life is processed through the eyes of two young American women living in different decades: Pru, who finds herself directionless after the death of her fiancé in the Vietnam war; and Annie, whose fiancé has just been sent to fight in Afghanistan in the tumultuous post-911 days of the early 21st-century. Pru, grieving and adrift, accepts employment as the caretaker of an elderly, reclusive English woman named Mrs. Spencer—who many people suspect to be the Duchess of Marlborough—in the village of Banbury. Many years later Annie journeys with her mother to the same village, and is captivated by a forgotten old biography describing the outrageous exploits of the duchess. At the village pub, she acquires a new friend named Gus, who knew both the remarkable writer of the book and its equally remarkable backstory; he helps her fill in the missing pieces regarding both the fate of the rambunctious duchess and the surprising connection between Pru and Annie herself.

The best thing about this novel is the dialogue, which is the definition of witty repartee. The characters are never content to talk if they can banter, never content to merely converse if there’s an opportunity to hurl brilliant zingers at lightning speed. If you’re not a fan of circa 1972-BritSpeak, this is not the book for you, since nearly every paragraph is riddled with fetching Briticisms. An interest in early 20th-century writers, artists and historical figures will also heighten the enjoyment for any reader of this novel, as the real-life duchess maintained a veritable who’s-who of friends, lovers and enemies from the period, including Winston Churchill, Consuelo Vanderbilt, Prince William of Prussia, and Claude Monet, among many others. In particular, the salon-set of the heralded writers of the era are celebrated, with quotations from Virginia Woolf, Edith Wharton and Marcel Proust peppering the dialogue of the literary-loving protagonists. Book nerds take note! All in all, a charming read.

A poverty simulation that will motivate you to be an advocate