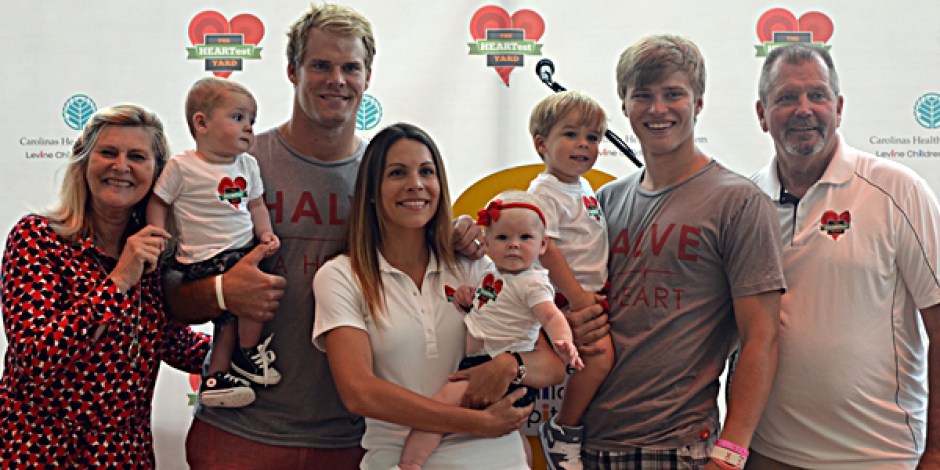 February is National Heart Month, and we’ve teamed up with our partners at Levine Children’s Hospital to bring you a series of patient stories that are sure to make a lasting impact on you. Last week we introduced you to Kyler, and next up is one of our favorite Charlotte families – the Olsens. This was first posted on Carolinas HealthCare System’s blog, and we thank them for the chance to share the story with you! (P.S. Greg’s wife, Kara, was a recent Smarty mom – check out her interview here!)

Carolina Panthers’ tight end Greg Olsen had a career year. He helped the team on an amazing run to Super Bowl 50, was named to the Pro Bowl again, and was chosen as the Panthers’ nominee for the NFL Walter Payton Man of the Year award, given to the player who excels on and off the field and makes a difference in their community. But even during the team’s historic run and Olsen’s fantastic season, he continued to support and lend time to a personal cause close to his heart — and many other hearts.

In 2012, Greg and Kara Olsen found out that one of their unborn twins, T.J., was diagnosed with Hypoplastic Left Heart Syndrome (HLHS). T.J. would need at least three complex heart operations to save his life. Since T.J.’s birth, the Olsens would spend many days and nights within the Cardiovascular Intensive Care Unit (CVICU) at Levine Children’s Hospital. It was during these appointments, operations and recovery time that the Olsens would get to know the medical staff in the CVICU as more than just the people that took care of their son.

Kari Crawford, RN, pediatric nurse practioner, first met the Olsens on the day they found out that T.J. would be born with HLHS. She talked them through that hurdle and eventually became instrumental in getting the Olsen’s charity, The HEARTest Yard, up and running.

“HLHS families go through an incredible amount of difficulties, coupled with nerves and stress,” said Crawford. Once home, the Olsen family, like many others, soon discovered the incredible need to have in-home nursing care for their fragile son. That’s why they created The HEARTest Yard fund, to provide in-home, private nursing care, physical therapy and speech therapy among other benefits, to families of children born with HLHS.

“This program has been such a tremendous blessing for so many of our families,” said Crawford. “You can still go on with your life and someone will make sure your child has everything they need. The stress that it relieves parents of is amazing.”

The fund covers over $25,000 dollars in healthcare expenses per family. Olsen spearheads the fundraising in the form of golf tournaments, concerts, T-shirt sales, and his own personal donations.

“Greg knew exactly what he wanted and how to do it when he approached us about wanting to start The HEARTest Yard,” said Crawford. “He and Kara have such a high level of maturity, they are direct, they did their research and they came to us with a plan.” The nurses say that they have seen this heart condition break families apart. In the case of Olsen, however, they describe him as “the most supportive husband and always kept everyone around him calm.” Nurse Michelle Mrkich said, “He always wanted to know how Kara was sleeping and checked in on her and T.J. before 5 a.m. every morning. He’d get what sleep he could and then head to practice.”

Even during the football season, Olsen would want to to spend as much time with the family as he could. “It’s a priority for him, “said nurse Stephanie Bergquist. “They didn’t have to be at the hospital as much as they were. They were always here. He was on 24/7. He never says no.”

Olsen’s contributions include much more than the inception and growth of The HEARTest Yard. Kim Ortmayer, RN, the charge nurse of the 6th floor, says despite all of the fame and publicity that surrounds Olsen, he is happiest and most at home when he is meeting patients and talking to families at Levine Children’s Hospital. “He came over the holidays (without any cameras) and met all of the kids that were here. He doesn’t want hype. He just likes to sit with the families and comfort them and encourage them,” said Ortmayer.

The Olsens also spent time getting to know the staff. Mrkich recalls that Olsen would often ask her if she needed anything. “You don’t normally have a patient or a family member checking in on the nurses, it always stood out to me that he made it a point to ask me how I was doing or if I needed anything,” she said.

And while he remained “T.J.’s dad” at the hospital, the nurses say he never turned down an autograph request for a fan. “Moments after his wife Kara gave birth, and they only had precious time with T.J. before his surgery, we saw Greg meeting fans and signing autographs” said Ortmayer.

“He is a dad when he’s here,” said Ortmayer. “I have seen him belt out the entire ‘Frozen’ soundtrack. I’ve seen him covered in vomit. He gets mad if I have to stick T.J. with more needles. He’s sat on a floor with a dad who just lost his kid and cried with him for hours. He wants everyone to do well. Many people don’t see that.”

Learn More About The HEARTest Yard

The goal of The HEARTest Yard initiative is to help families as they adjust to a new life of having a child with a congenital heart defect. Through the fund, parents may deduct money from a predetermined medical benefit. The program does not charge families to use the benefit, and the hospital has no additional expense.

If you’d like to learn more about the The HEARTest Yard program, contact Kari Crawford, nurse practitioner, at kari.crawford@carolinashealthcare.org or 704-381-3949.

From the Smarty Health Corner: Your first orthodontist...

What to expect when your child gets braces...