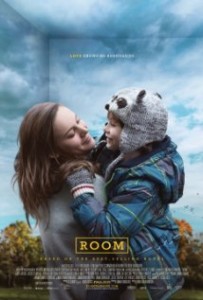 When Emma Donoghue’s 2011 novel Room was released, I pitched it to our book club during our monthly meeting since it had gotten great reviews. When I told these fantastic ladies that I wanted to read a story about a five year old boy who had lived his whole life in a tiny room that he never left because he and his mother had been kidnapped, I didn’t have any takers. They thought it sounded incredibly dark and depressing and way too terrifying to read. Now I might not have done the best job describing the book, so I don’t blame them for not wanting to read it (love you book club ladies!) but I read it anyway and thought it was brilliant.

Fast forward to this December, and some dear friends offered to take me to the movies for my birthday. I’d seen a lot of films this year, but hadn’t yet seen Room and I was eager to go. I realize it isn’t the typical choice for a ladies celebration, but off we went. I wasn’t too worried about my friend Denise since she enjoys Hallmark movies so I knew she wouldn’t mind a good cry. My friend Gina has teenagers at home, so she can handle anything. I was a little worried about my friend Jill, but she is a trooper and managed to make it through. I hope she’s glad she did. I know I am, even though we all left the theater red-eyed and exhausted. I also hope to never complain about keeping my kids entertained in a small space like a plane or car ever again after seeing what this mother went through.

This is a wonderful movie. Yes, it’s a terrible premise—a child born in captivity by a mother who was kidnapped as a teenager. But it’s so much more. It’s the story of the unbreakable bond between a mother and her child, how a mother will do just about anything to protect her loved one, and the miraculous way this pair created their own version of a normal life in anything but ordinary circumstances.

Brie Larson is fearless in her portrayal of Joy, Jack’s mother. I’ve enjoyed her work in lighter comedies (Trainwreck), but had no idea she could pull off a performance like this. She embraces the role and shows us her love for her son and her desperation to be a good mother. Jack is played by relative newcomer Jacob Tremblay who was eight when the movie was filmed. You know how sometimes you cringe a little when you see child actors because they are pretentious and tend to over-act? You won’t find that here. I completely forgot that this kid was acting. His bond with Larson was so incredibly real. I’ve loved Joan Allen since her performance in the great but under-rated The Upside of Anger and she is also terrific here in the difficult role as Joy’s mother.

Don’t forget to watch the 73rd Golden Globe Awards this TONIGHT! Room is nominated for three Golden Globe Awards—Best Motion Picture, Best Screenplay and Best Actress in a Drama. I’ll be rooting for it to get some serious attention from the Hollywood Foreign Press. I love the Globes since it’s the less formal awards show (they also serve the nominees cocktails so anything can happen) and it is hosted by Ricky Gervais who loves to skewer celebrities with his bizarre humor. And if you like Gervais, go check out his 2008 film Ghost Town, a terrific little film that highlights his weird humor beautifully. Hooray for Hollywood and let the award season officially begin!

‘The Borrowers’ comes to Children’s Theater

Exclusive Smarty Invite: YOU are invited to the...