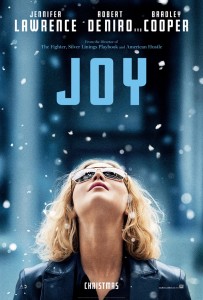 When I heard that Jennifer Lawrence, Robert De Niro and Bradley Cooper were re-teaming with director David O. Russell to tell the story of Joy Mangano, entrepreneur and inventor of the Miracle Mop, I was all in. Joy is actually the third collaboration between Lawrence and Russell. They obviously work well together since Lawrence was nominated for an Academy Award for her supporting role in American Hustle, and won the Best Actress award for her Silver Linings Playbook role. While she has been nominated again this year for her portrayal of Mangano, I’m afraid the third time is not the charm for this duo.

The movie was enjoyable, but I just expected more from Russell considering his previous successes. The tale begins with narration from Joy’s beloved grandmother Mimi (Diane Ladd) as we meet winsome young Joy who loves to create stories and build little worlds out of paper. However, she has to deal with a rather dysfunctional family including father Rudy (Robert De Niro), mother Terry (Virginia Madsen almost unrecognizable with her fantastic hair and costuming) and half-sister and occasional nemesis Peggy (a brunette Elisabeth Rohm) as the parents are divorcing. We then fast forward to the present, where an adult Joy lives in a ramshackle house and things haven’t turned out exactly as planned. Her agoraphobic mother never leaves the living room and devotes endless hours to watching soap operas. Her ex-husband Tony lives in the basement and can’t seem to hold down a job. She is constantly exhausted and overwhelmed with her two kids and a crummy job working as an airline staffer. To top it off, her volatile dad moves back in after his second wife kicks him out and he has to share the basement with Tony (the handsome Edgar Ramirez).

As Joy tries to understand what happened to her once promising life, we flash back to a montage of her time with Tony—from their first meeting to their inevitable divorce. Returning to the present, it is clear that Joy needs to make some serious changes in her life. That change comes after she cuts her hand wringing out a mop after cleaning up a wine glass spill and she decides to invent a self-wringing mop that has a washable, detachable head.

Sometimes truth is stranger than fiction, and while Mangano’s rags to riches story is a real testament to hard work, perseverance and guts, I don’t know that it translates to a great story on the screen. Many true elements of the story seem unbelievable—like Joy getting her father’s new girlfriend Trudy (Isabella Rossellini welcome back to the screen!) to invest in her idea. How does this wealthy, sophisticated woman end up with Rudy? Joy’s introduction to the world of QVC is also a lucky break—how does Tony, not the most business savvy guy turn a casual friendship into an all-important meeting with these executives? If this were a fictional story, these coincidences would have seemed very contrived.

Joy’s story spans several decades, and while I adore Lawrence as an actress, I fear she may have been too young to play Joy from young adult to matriarch of the entire family. Don’t get me wrong—she is an amazing actress, but I had a hard time seeing her as a young mother and a weary wife. I can’t believe I am actually writing this but I think my beloved Bradley Cooper was also miscast as QVC executive Neil Walker. While I am always happy to see him, his talents seemed wasted as Joy’s boss. Since the pair have had such great chemistry and romance before, I really expected more from their platonic relationship. Their screen time together became a disappointment.

One other odd choice in the movie was to have Melissa Rivers play her famous mother Joan in her QVC jewelry selling days. It’s just a brief scene, but it was unnerving to watch Melissa attempt and fail to mimic her inimitable mother.

While the screenplay has issues and is uneven, the movie still boasts a stellar cast with terrific performances and some great scenes. On it’s own, it is a decent movie and worth a rental. I have no doubt that if Russell and Lawrence team up again, they will bring joy to their audience with their next venture.

The 2018 Smarty Camp Guide to the rescue!