Home Education From the Smarty Education Corner and Charlotte Latin School: The Get Up and Go Part
EducationParentingThings To Do

From the Smarty Education Corner and Charlotte Latin School: The Get Up and Go Part

Returning to School after the holiday break is fun for everyone. One of my favorite things to say to the young children is, “I have missed you so much. The last time I saw you was last year!”

And, to them, about a year has passed since we dismissed directly following a candy soaked-light infused- holiday sing. They bolted out of 2015 with wide-eyed enthusiasm and energy excited about time with brothers and sisters, cousins, aunts and uncles, grandparents, and neighbors. I am sure they were excited about other wonders and wishes, but honestly, I think the energy was simply contagious: We’re Out of Here and headed into a wide-open holiday. 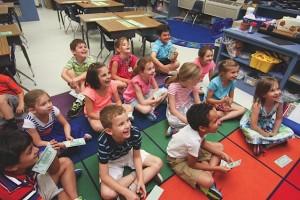 But as the weeks passed, the events subsided, and the confections were just all-together too plentiful and too sweet, another sort of anticipated joy started to bubble up around the edges. I heard it (and thought it) as the days wore on and 2016 was being rung in, full of possibilities.

The rain stopped. The Panthers won again. It was time to return to school and no one was complaining. Hope was in the air.

When the children arrived today, I made my rounds in transitional kindergarten, kindergarten and first grade. What I immediately noticed was the quiet. My TK friends had created little circles and worked at the art table or the building centers. They spoke softly to one another and focused on amazing details, with steady eyes and hands. The K group had unpacked book bags, organized cubbies and sat on the rug ready to start calendar time. The first graders had sharpened pencils and were plowing through morning work. You could have heard a pin drop. They were almost reverent, they were so quiet.

“Are you glad to be back?” I asked one little girl.

Several fellows nodded in agreement. Then others piped up:

“I missed my friends and my teachers.”

Another proffered, “ I missed snack, recess, and PE.”

“I missed the routine,” said Sydney, my friend destined to be a teacher.

“Sydney, what is so good about a routine?” I queried.

She shrugged and said, “I guess it’s just the get up and go part. I just like to get up and go. And Mrs. McAdams is really good at that part, too.”

I got tickled and thought, I bet Sydney’s mom likes Mrs. McAdams, too.

Our Lower School Head, Mr. Tayloe, says this is his favorite time of the year because the children are so engaged in the learning. After a joyful two weeks off, they crave all that school has to offer and they put together one productive day after another. From August to May, they build a fantastic year of growth. Only to be interrupted by summer.

It is a good thing that Sydney, Ryan and my other young friends can come back for summer camps. Which seems like a funny segue, but after two weeks at home with children, I am sure there are quite a few moms and dads thinking ahead to the ten weeks of summer. When I asked our Summer Camp Director how she would describe our philosophy, she said, “We do all the things school does without the academic focus.”

She said, “You know, the friendships, the partnerships, the collaboration, the joy, the enrichment, the routine.”

Oh, I thought. The get up and go part. I will make sure Sydney ‘s mom registers for camp ASAP at www.charlottelatinsummer.com!

Smarty Event: Camp Show for Camp Thunderbird this Sunday at Discovery Place (psst, and a chance to win a FREE week of camp!)

Smarty Giveaway: Win a Weekend with Your Daughter at Camp Highlander, a $475 value!

Have a College-Bound Teen? Prepare Them for Healthy...

Smarty Celeb Mom Anjanette Flowers on being a...