Home Things To Do Smarty Movie Review: Mockingjay Part 2
Things To Do 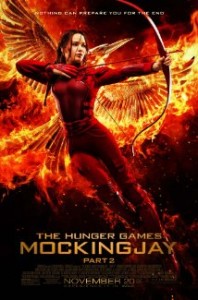 It’s hard to believe that the story of Katniss Everdeen has come to a close. She’s been around since 2008, when the first book in Suzanne Collins’s highly successful trilogy was released. We’ve been watching her story play out on the big screen since 2012, when Jennifer Lawrence became the fiercely independent teenage hero in The Hunger Games and have revisited her plight through Catching Fire and Mockingjay Part 1.

Mockingjay Part 2 picks up right where we last saw Katniss as she recovers from being attacked by Peeta (Josh Hutcherson), her friend and partner (and maybe more?) in the games. Peeta was tortured and brainwashed to kill her by President Snow (Donald Sutherland) the evil leader of Panem, the dystopian world in which they live. Katniss realizes that her role as a symbolic leader of the rebellion is not enough and she decides to take action to hunt down and kill the source of all of her torment–President Snow.

Katniss and her friend/love interest Gale (Liam Hemsworth) set off on a quest to storm the Capitol which has been transformed into another games arena rigged with deadly traps. Along with a team that gets smaller every time they meet a challenge, they fight tirelessly to reach the President’s residence with the ultimate goal of creating peace in Panem. There are some especially terrifying scenes in the tunnels of the Capitol, and at one point I thought I might have stumbled into a zombie apocalypse by mistake.

One of the greatest things about this series overall is the casting of the characters. Jennifer Lawrence is flawless as the courageous, talented and loyal Katniss. Elizabeth Banks is brilliant as the effusive Effie. Donald Sutherland could easily fill your nightmares as President Snow. Josh Hutcherson never quite fit my expectation of the sensitive and caring Peeta, but his chemistry with Lawrence was great. I especially loved Woody Harrelson as Haymitch, the jaded drunk who survived his own Hunger Games. My friends and I were lucky enough to meet Woody Harrelson when the first Hunger Games was filmed in Charlotte. He chatted with us before filming a big scene with Wes Bentley and was so incredibly charming and kind. He could not have been more gracious with his time. It was amazing to watch them filming and so exciting to then see their work on the big screen!

While I fully enjoyed the movie, it does not provide the same heart-pounding intensity of the first two films. As the story becomes more about the rebellion and less about Katniss’ individual survival, the emotion of the story becomes a bit diluted. After the initial shock of what we experience with the first two films, it becomes expected that young characters will die off in Mockingjay. Katniss also must defer to President Coin (Julianne Moore) once she leaves the games, and she is at her best when she is in charge of her own destiny. The love triangle between Katniss, Peeta and Gale was also downplayed in the film, a definite departure from the books. I wish that the Mockingjay story had not been divided into two parts as it interferes with the natural story arc. Unfortunately, this seems to be the trend with movie sequels these days, starting with Twilight and continuing with Harry Potter. I guess the studios are willing to sacrifice the story momentum for the extra revenue!

At what age is it appropriate to watch the Hunger Games series? I would definitely recommend that kids read the books first before watching the movies. It’s a great incentive to get your kids reading, and it is important for them to understand what they will be seeing on screen–a bunch of kids killing other kids. If they can’t handle the books, they really can’t handle the movies. While the violence in all of the films is not excessively graphic and is in many instances only implied, it’s still an extremely emotional story featuring lots of death. While I was hoping to shelter my 12 year old from the books for as long as possible, he is now finishing the last book of the series and just saw the first movie. As we watched it together, I realized that there are some benefits to having him experience the Hunger Games. He gets to see a fantastic female role model kicking butt, he learns about the trappings of power and perils of an overreaching government, and he learns that even one person can make an enormous difference in this world–some great lessons mixed with some great entertainment. So head on out to the theater this weekend and may the odds be ever in your favor!

Fitness Friday: AIR Charlotte’s upcoming classes for you AND your kids

Top Ten Reasons to Volunteer with The First...