A few weeks ago, I spoke with award-winning author Dolen Perkins-Valdez, whose second novel, Balm, is a lovely, lyrical work set in Chicago just after the close of the Civil War. The novel examines age-old issues of race and class, following the stories of three people trying to reconstruct their shattered post-war lives in the midst of a similarly shattered nation: Madge, a freeborn Tennessean; Sadie, a newly widowed white woman from Pennsylvania; and Hemp, a formerly enslaved man whose wife Annie has been missing since she was torn away from him in Kentucky. All of them are transplanted to Chicago during a time of tremendous national turmoil, each with his or her own personal (and metaphorical) struggle for peace. 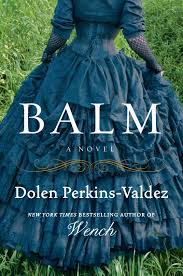 And each of them has a gift. Madge, who was raised by a mother and two aunts who were powerful healers, is herself a gifted healer, making use of natural remedies to ease the suffering of others even as she struggles with her own miseries after a familial rejection. Hemp is a kind man seeking a righteous path. But it is Sadie’s gift that is the strangest: she can commune with the dead. Their three lives become intertwined, as Sadie hires Madge to assist in her odd household, and Madge and Hemp meet and are drawn to one another.

I was curious why Perkins-Valdez chose Chicago as the setting for her book; historical novels about the Civil war usually bring to mind the battlefield states, at least to me. And she tells me writing a Civil War novel was her initial intention, but as the story progressed, her husband pointed out the descriptions of the time and place contained mention of relatively few well-known historical events, focusing instead on the characters in the post-war period. “It’s actually a reconstruction novel,” she says.

The book is beautifully and poetically written. The narrative and the dialogue have a compelling 1860s cadence:

Hemp threw the tool, and it bounced off the roof, landing on the dirt with a thud.

Hemp rolled the nail between his fingers. In the pause, the reverend gave Hemp a tender look that made him think of the day he put a flower in Annie’s hair.

Hemp shook his head, fought off a blue feeling. He remembered how, after word came of the recruitment camp for slaves looking to enlist, a few of the men vanished in the night. Others walked off the property in the broad daylight. Hemp was the only husband who stayed behind, his face shocked and still. Annie, Annie Annie, he’d prayed aloud.

However, Perkins-Valdez didn’t strive for absolute authenticity in the language, noting it would be fairly burdensome to a twenty-first century reader. She does a brilliant job of bringing the era to life; the city is recreated with so much period detail that it’s a bit shocking to set the book down and suddenly find yourself back in a world where virtual reality sometimes eclipses actual reality.

Echoing present-day life in a nation that still grapples with racial and class dynamics, the relationship among the characters is complex. Ironically, even though she begins practicing as a medium once she discovers the dead are speaking through her, Sadie is suspicious of Madge’s healing abilities, wondering if she employs the ‘dark arts.’ Perkins-Valdez draws a nuanced portrait of the two women, pointing out that although the characters are very different, they do achieve a kind of non-homogenized peace with one another and with their own challenges. “All of the characters eventually reach an uneasy truce with the things that haunt them: Madge with her mother, Sadie with her father, and Hemp with his own difficult past,” she says, adding that although the novel is evocative of the brokenness of society, it is ultimately also optimistic. It’s also a great American story: it is a book about reconciliation and reinvention.

Writing a novel like this must have involved a staggering amount of research. If you’ve been reading my last few reviews, you’ll know that I’m in the midst of a series honoring the Charlotte Mecklenburg Library Foundation, where Perkins-Valdez was a featured speaker on November 1st, at the second annual Verse & Vino celebration.

So it’s no surprise to learn she loves libraries. “When we chose our house in D.C., I actually insisted that it be on a bus line to the Library of Congress,” she says, adding that time spent there researching and writing is like “ascending to heaven.” As a child, Perkins-Valdez spent very little time in libraries, although she developed a fascination with books by picking up every grocery-store mass-market paperback she could get her hands on. She read so much that she reports actually being called out in school for reading adult novels. In college, her voracious reading habits developed into a love of writing, and she began to recognize the writers who would most influence her own voice: Toni Morrison, Edward P. Jones, and the Haitian-American writer Edwidge Danticat.

In person, Dolen Perkins-Valdez has a clear, sweet voice matching her gracious demeanor. She’s a witty, compelling, thoughtful speaker, which I found to be reflected reflected in her writing.

You can read more about her, including about her New York Times bestselling novel Wench, on her website: http://www.dolenperkinsvaldez.com