Home Entertainment Smarty Book Review: Verse and Vino, Part I
EntertainmentParentingStyleThings To Do

This week I am reviewing new releases from bestselling New York Times authors who will be in Charlotte on November 5th at the second annual Charlotte Mecklenburg Library Foundation’s signature fundraising event, Verse & Vino. Let me be the first to tell you, this event was SO MUCH FUN last year. Even though I am admittedly a huge literary nerd, I think everyone would love it. Last year’s author/speakers were phenomenal, and this year sounds as good or better. I went with a table of couples last year, and all of us, even the ones who rarely pick up a book, were alternately mesmerized/howling with laughter as the authors spoke. Plus it’s a fantastic, glitzy benefit. Click here for more details.

I recently spoke with Slaughter and English. Reviews of their books are below.

Fair warning: once you’ve read it, you can’t unread it.

Karin Slaughter’s latest novel Pretty Girls snatches the genre of psychological suspense and infuses it with gritty descriptions that nearly froze my face in a mask of shocked surprise. I’m not squeamish—I’m an ER doctor—but weeks later, I’m still perspiring and fluttering my hands at the thought of it. 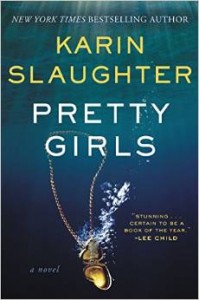 Slaughter is a master storyteller. Indisputably at the top of her genre, her work has sold more than thirty-five million copies, claiming a combined 2000 weeks on bestseller lists around the world, including 15 New York Times bestsellers. She’s perfected the art of ratcheting up tension, so that while Pretty Girls begins as a witty character-study, it finishes as a full-on heart-pounding scream fest.

The storyline alternates POVs between three narrators: Claire, a beautiful but callous trophy wife; Lydia, Claire’s caustic, less refined older sister; and Sam, their father, whose journal immortalizes his heartrending despair after the disappearance of another sister many years before. The perspectives of these three are woven together in a powerful and provocative narrative during the course of a self-directed investigation into the whereabouts of a series of missing young women in and around Atlanta. Claire’s life, which is suffused with surface perfection, abruptly boils over into flaming disarray after her husband gets amorous with her in an alley and is promptly whacked by a passing thug. After his death, one disturbing discovery follows another, and soon everything in Claire’s prosperous existence is upended as she copes with monstrous revelations concerning the people she loves most.

Why does Slaughter (yes, it’s her real name) write so unflinchingly about terrible things? She points out to me that just like, ahem, an ER doctor, her profession as a crime novelist requires some degree of anesthesia when it comes to one’s own emotional responses. She believes that portraying crime for what it is—realistically, without shortcuts—is the truest way to convey the impact on victims and families. In real life, people don’t endure sanitized versions of crime, and likewise in fiction, the emotional response of the reader is heightened by the violent details. But she doesn’t want her books to be a place of unrelenting darkness, either: she also seeks to illuminate the redemptive beauty in human nature, especially the bonds of family and friendship. In Pretty Girls, Lydia and Claire are resilient, tenacious women (like many of Slaughter’s prior female characters) who reforge their relationship after years of estrangement stemming from the tragic disruption caused by the loss of their older sister, bringing the close of the novel an optimistic warmth.

Another point Slaughter makes regarding the thriller genre is its enduring presence in the great stories of our time. Beloved classics like To Kill A Mockingbird, Gone With The Wind and The Great Gatsby all contain spectacular crimes, as do many other famous novels that aren’t automatically thought of as crime fiction. There is something elemental and compelling in stories of our responses to misdeeds.

I found Slaughter to be warm and engaging in conversation. Curious about her writing process—her novels are so well-paced—I asked her how she does it. Part of it is practice; she’s written over fifteen novels, two novellas, and multiple short stories, so she knows how to propel a story to a dynamic finish. But another part is the attention she pays to the beats of the story, with plenty of reading and rereading as she goes along to tighten and reform the plot where needed. Pretty Girls was a departure for her, since she’s known for series writing. Slaughter enjoyed writing this novel, although for her next work tentatively titled The Kept Woman, she’s returning to her Georgia Bureau of Investigation special agent Will Trent. When questioned about the differences between writing a series novel and a standalone, she mentioned this is the first book she’s written in which the protagonists weren’t professional investigators, making it trickier to engineer believable choices for her characters to delve into the novel’s murders. This is accomplished so skillfully that as I read it, I never questioned Claire and Lydia’s actions as they unravel the mysteries behind the disappearance of a slew of young women; instead, I found myself so invested in the fate of the characters I read the book in only two marathon settings.

It turns out that Karin Slaughter is a huge supporter of libraries, calling them the “multifunctional backbone of our communities.” She’s even gone so far as to found her own library advocacy group, http://www.savethelibraries.com. (LOVE!) If you’re in Charlotte on November 5th, I hope you can attend the party to hear Slaughter speak in person. You can also read more about her at http://www.karinslaughter.com.

In a recent conversation, T.J. English, the lauded journalist/author, asked me what I knew about Whitey Bulger. Prior to reading English’s latest work, Where The Bodies Were Buried: Whitey Bulger and the World That Made Him, my recollections of Bulger were half-formed, misty snippets plucked from the popular press: I knew he was some kind of washed-up gangster, whose years on the lam had ended in an explosion of public fascination when he and his dishy girlfriend were apprehended in California awhile back. I also had a vague recollection that in the midst of his trial, someone related to it had gotten himself whacked in some cryptic fashion, although I couldn’t remember who or why or how. That’s pretty much it. Clearly, I’m no connoisseur of the Irish-American mob. 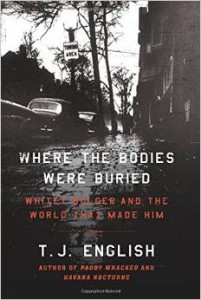 English, on the other hand, has made a career of investigating and chronicling the infamous South Boston crime legends, along with numerous other underworlds: the drug wars in Juárez, Mexico; Jewish mobsters in Havana; and the Irish gangs of New York, among others. If it’s someplace a sane person would avoid, English has probably been there and had a few beers with a murderous psychopath nicknamed Mad Dog or Mugsy, while unobtrusively extracting from him the secrets of the alternate universe of organized crime.

This is a great time to revisit the story of James Joseph “Whitey” Bulger, who became the focus of renewed public interest with the recent release of Black Mass, a movie about the Irish-American mafia (featuring a tragically dumpy Johnny Depp.) Raised in poverty in South Boston, Bulger drifted into crime as a teenager, ultimately morphing into one of the area’s most feared organized crime bosses. If there was a way to to profit from an unsavory enterprise in Boston—extortion, arms trafficking, gambling operations, drug smuggling, hijacking, loansharking, etc— you could be certain Bulger had a hand in it.

How, you might reasonably wonder, was he able to continue this reign of barbaric tyranny for so long? It was no secret who he was. The cops knew, the feds knew, his rivals knew. And yet, he ruled South Boston for decades, merrily shooting or strangling anyone who stood in his way, while the FBI lurked nearby, daintily holding its collective nose as the bodies piled up.

The answer is shocking: in the 1970s, Bulger was recruited by the FBI as an informant against the Italian Mob, working with Special Agent John Connolly in a symbiotic relationship that allowed Bulger unchecked freedom in his rampage of murderous misdeeds. The feds knew all about it, and not only did they not stop him, but they actively abetted him, feeding him information he used to eliminate rivals, protecting him again and again from prosecution. This continued for decades, until at last a joint task force of the Drug Enforcement Administration and the police built a case against him, deliberating excluding the corrupted FBI. Nonetheless, Bulger was tipped, and fled with his girlfriend Catherine Grieg. The FBI, mired in humiliation over its role in enabling such a litany of horrors, turned on Connolly—Bulger’s complicit handler within the agency—and he was ultimately sent to prison. Meanwhile, Bulger and Grieg enjoyed years on the run until finally they were captured in Santa Monica, California in June 2011.

So all this begs another question: why? Why would the government go to such extremes to protect a master criminal, especially given that his utility as an informant was minimal? This, more than anything else, is the question that intrigues T.J. English. Scores of books have been written about Whitey Bulger. Very few of them go to such lengths to delve into the systemic dysfunction that allowed him to flourish.

English initially followed the story as a citizen and journalist. Often writing about the dark side of human nature, he views the theme of his works as an exploration of our social universe, seeking to illuminate the subterranean criminal world in order to understand the aboveground societal implications. In this case, to English, the most compelling aspect of the Bulger case is the staggering corruption of the criminal justice system, which began as a dirty little secret inherited from even earlier days of agent-gangster collusion. Where The Bodies Were Buried explores the career and trial of Whitey Bulger, seeking to shine light on the intertwined nature of crime and law enforcement. Through lengthy cultivation of sources—beginning with some of his earlier books—English manages to elicit inside information from a variety of sources: lawmen, witnesses, families, jury members, and even the gangsters themselves.

I was curious about this process: how do you get a criminal to talk to you? The answer, English maintains, is neutrality: people won’t share information with you if they sense judgment. He seeks to understand the perspective of his subjects, allowing the reader to be the judge of the unfolded events he writes about. I asked if he’d ever received feedback from his sources after publication, and he said yes. But I get the sense that few of these interactions have been hostile; his sources trust him to write honestly and objectively, as do his readers. Unlike a fiction writer, English views the act of sitting and writing as only a fraction of his profession; he thrives on observation, active research, and relationships as his primary métier.

I’m writing this piece on behalf of the Charlotte Mecklenburg Library Foundation, and so I feel compelled to include a shameless plug for the power of libraries. Prospective authors, take note! English was born in Tacoma, Washington—one of ten children—and like most authors, he believes that becoming a writer begins with becoming a reader. Since it was difficult to find a calm place to read in his childhood home, he often escaped to the library, which he credits with sparking his eventual career. In addition to WTBWB, English is a noted journalist, screenwriter and the author of multiple New York Times bestsellers. I’m looking forward to his next work, which will focus on the Cuban American underworld in the U.S. in the decades following the revolution in Cuba.

Get Your TAX FREE Shopping On!

Smarty Scoop on Weekend Events: May 12-14