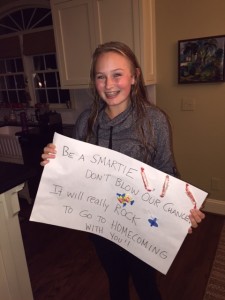 I say “our” first rodeo because a) it truly is a collaboration of many people, and b) it does kinda feel like a rodeo for all parties involved.

This year marks the year of three schools for me: high school, middle school and elementary school. To say the transition from #summer2K15 to the 2K15-16 School Year was a little rough for me is an understatement. I felt like I got hit by a bus, literally. Add the pressure of 9th grade HoCo to the mix and it’s just one hot mess. Homecoming is a BIG DEAL for 9th graders, way more than when I was in high school. It makes total sense, it’s their first big chance for a cool date, boys and girls alike. The big “asks” started the 3rd week of school and then it was GAME ON! Let the snap chat story and instagramming begin!

Here’s how it all goes down… 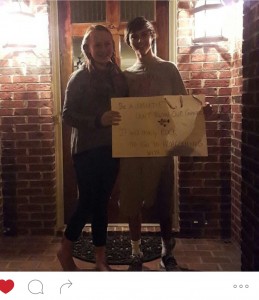 The pressure starts for the boys right out of the gate. Gone are the days of a quick ask in the hallway or via phone. This is like a wedding proposal, people. Not meaning they are going to get married, or even that they have a huge crush on the person they are asking. But meaning that your son’s “ask” better be super cool and witty, because let’s face it, this will be plastered all over social media in 2 seconds flat. Some boys live for this kind of attention and recognition. Others dread it. I’ll be honest, every single HoCo poster that I saw on instagram was way edgier than my marriage proposal (sorry honey, these boys have skillzz like we’ve never seen, you can thank social media for that:-)

One of the first things I heard when Homecoming came up at school was that once asked, you cannot say no. Before we all go women’s lib, consider this. It’s actually a good thing to instill in the student population, and teaches kids to be be considerate of other people’s feelings. It takes a lot of courage to whip out a clever poster and flowers at school in front of a huge audience. And we as parents know that of course it’s ok for our kids to say no, if it’s a really uncomfortable situation. But the students take this seriously and they have worked the system out in their favor and follow the rules (most of the time). Basically, every ask is vetted by friends, so nobody is going to ask somebody who is going to say no.

Our “ask” was very cute and it was actually hilarious the way it all played out. My daughter was convinced that this particular boy was too shy, his friends also convinced her of this known fact. So she had pretty much dismissed the idea of HoCo altogether. After her field hockey game one night, a group of moms/kids went out for a spontaneous dinner, one of the moms was her future date’s mom. She arrived first to dinner and sat next to me and said “Aidan’s going to ask Anz to Homecoming tonight!” I was totally caught off guard, but knew immediately that this was going to be a really fun surprise, because my child had no idea. So it was now game on to get her home asap and showered – LAWD knows she’d want to look really cute for this big event that was about to go high school viral! When we got home, I casually nudged her to get in the shower but didn’t want to draw attention to it. Since it wasn’t a school night, I gave up on forcing her to do that, it would be too risky to blow the surprise. So I let it be. As luck would have it, the doorbell rang while she was mid-stride in the shower, with conditioner still in her hair. I gently tapped on the door and said “hey, you need to get out of the shower”, her response was something short and snarky, perfectly normal for a teenager in that situation. So then I said “you need to get out of the shower, NOW, and look REALLY, REALLY cute!!!” which seemed strange since it was 10:30p at night. But then she heard the doorbell and it all clicked. And so our HoCo journey began. (How cute is she with her sopping wet hair?! It made for the BEST HoCo ask story ever!)

This has been a painful process and I am so thankful that freshmen typically ask earlier than their rude too-cool-for-school senior counterparts who ask sometimes the week of. (Note to self: I will never let my boys do that when they are seniors.) My child wants to be a fashion designer (not kidding) so she had a very specific dress that she was looking for. Unfortunately it took me two weeks to convince her that this dress did not exist and that she was way over-thinking the dress. The dress is just your ticket in the door. You don’t want it to overpower your look since this is not prom. You just want it to be dressy enough for a fancy dinner and dancing. That’s hard to convince a stubborn fashionista in the making. After going to every boutique and department store in the Greater Charlotte Area, we finally settled on the simple black dress. This will allow her to let her creativity shine with her accessories, hair and shoes. Phew, thank the Lord above this is checked off my list. Kinda wish it happened on day 1, since I’m pretty sure we saw this dress on that day. But then I wouldn’t have this fun story to tell, would I?

This is T-R-I-C-K-Y for first time HoCo moms, especially if you don’t know your date’s parents. And again, I’m counting my lucky stars because I love the boy mom hostesses in our group. Some of the questions that came up sparked some really funny text threads between the moms, such as: 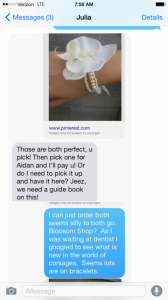 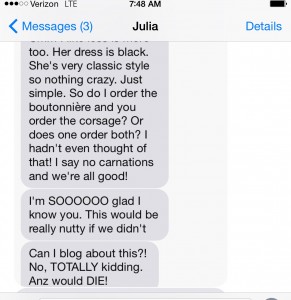 –Photos: Can the whole fam go to the pre-dance photo session at the club? Is that too much? Cuz, lemme tell ya, we have some serious Smarty spies D-Y-I-N-G to do just that!

–Curfew? This one will drum up lots of emotions, especially if you are the girl mom. Since birth, we have been in full control of every outing they have done, until this night. Everywhere they have gone, there is a scheduled beginning and end time. HoCo adds a late night layer that you might not have seen coming. And this brings up…the after party.

Yup, you read that right. There is always an after party. I know, we didn’t have those when we were in high school. I know, it might seem over the top. But it’s just how it’s done now. And you better hope you know the parents hosting, because all sorts of shizzle goes down at these chaperoned after parties, even in 9th grade.

Lucky for me, I know the host family really well, like from our kids’ preschool toddler class, and that makes me the luckiest girl HoCo mom on the planet. Our after party is just down the street and I adore the hostess. So I know there will be no shenanigans going on at that casa. Phew.

At the end of the day, I love that I’m riding my first HoCo rodeo with some amazing mom friends who have already shared so many laughs together. And the big night hasn’t even arrived yet. Stay tuned on that front. Times sure have changed!

From the Smarty Health Corner and Levine Children’s Hospital: Advice on FINALLY convincing your kids to eat healthy

Why is your Scarecrow Upside Down?

Save Energy, Money and Time This Spring

A MUST Event for Parents of 4th/5th graders:...