Home Parenting ‘Coraline’ will fill you with Halloween spirit: now playing at the Children’s Theatre
ParentingThings To Do

‘Coraline’ will fill you with Halloween spirit: now playing at the Children’s Theatre 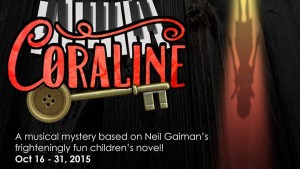 Enter into the magical, imaginative world of “Coraline”, where you will laugh and fall into the spirit of the season all the while falling in love with the characters of Coraline. The play draws you in with sweet songs and a guitar serenade, then captivates you with the spooky, daring adventures with Coraline.

Like many childhood stories, “Coraline” takes your kids from the gentle comforts of song and dance into the shadows of imagination. In these spooky places, darker themes present themselves along side courage and bravery. Modeling everyday life, Coraline finds herself caught in the hands of boredom during a rainstorm, while her parents distract themselves with work and responsibilities. Coraline’s spooky adventure begins with a locked door to nowhere. When her mother opens up the door and Coraline enters through without permission, the play opens up to the darker, creepier side. On the other side, her “other mother” and “other father” try to lure her into staying with them. They are engaging and fun at first. It is a “be careful what you with for” scenario, as there is always a cost. Coraline learns that her “other parents” in this other world are not the parents she wants. Her neighbors are also too ghoulish and exhausting. Coraline is tested. She must be strong, courageous, and wise to find her way back to her real parents.
We attended the play as a family, which includes my ten and twelve year old. The performance held our attention so much that it did not feel as if ninety minutes had passed. I would occasionally glance at my family, to read each of their reactions. I would find my them laughing, smiling, and their attention more serious during the spookier scenes. Being that my kids are a little older, never were they uncomfortably scared. However, I did notice some younger children in the audience sitting in the laps of others. I wondered if I would hear a cry or shrill of fear, but I did not. The director, Mark Sutton, certainly has found the perfect balance of scary for  “Coraline’s” young audience. While some of the scenes might be creepy (like the man without eyes), he balances them out with whimsicalness. I agree with the playhouse’s recommendation that children be at least eight years old, but ultimately you are the judge of what your child can handle. I know my son could have seen it younger, while the recommendation of eight would have been perfect for my daughter. It all depends how easily frightened your child can be (and how it may effect bedtime).

An enchanted Fall should include pumpkins, leaf piles, costumes, spider webs…and the tale of “Coraline”.  Just as you wouldn’t miss Halloween to create playful memories with your kids, you shouldn’t miss this spooky, fun, creative performance. It’s why we attend theater productions with our kids in the first place- to spark their imaginations and inspire lasting family memories. We encourage you and your family to “go through the door” and see “Coraline”. You will be haunted if you miss this performance!

I Got The Fever…

To TK or not to TK

Camp – Everything is Awesome!