The one piece of baby gear that started it all

Ten years ago I really became a mom.

I just had no idea.

Until he was born. Not quite 15 months after his big sister. When my first was born, I remember I could take breaks – I napped when she napped. I got her to bed at 6:30 pm, and I happily watched my shows. I bathed one baby, fed one baby, and clothed one baby. But, once my second was born, it all stopped…but I didn’t. He was a little more high maintenance than my first, and I just could never seem to catch a break.

When I was pregnant with him, my friends hosted a “Sprinkle” for me, and they all chipped in and got me a Dreamer Design double jogging stroller (it’s so very vintage now – they don’t make ‘em anymore). If you know me at all, you know I am a runner. I’m not a very good runner, but I run, therefore I am a runner. Well, my amazing friends knew me well enough to know that I would not survive a day without being able to go on a run on my own terms, so they gave me the most perfect gift anyone can give a “real” mom:

Just a tiny sliver of freedom. 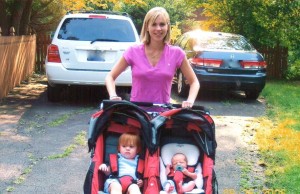 When I look at that stroller now, I realize that it symbolizes the dawn of everything. It was the start of Us. Of what we are today. It was me before 30. It was them before I even really knew who they were – or who would follow them. It was before lululemon – I’d run in a cotton sorority t-shirt and gym shorts. It was before iPhones and social media. It was before kids begged to play games on an iPad and before people posted their workouts on Facebook. Do you remember those days? You know, it was when “Oprah” was the housewife’s best friend. Her show’s intro at 4:00 pm was basically the end of a “work” day, and a text to friends looked more like this: 77776667777 (SOS). Rather than this: LOLOLOL.

And it was only ten years ago.

I’d run with them most week days because my husband traveled, and I just didn’t want to fuss with Child Watch at the Y. I ran with them on hot days, on cold days, and days when it was slightly drizzling (I had a rain tarp ;-)). We ran to the park, around the block, and to the store. I read books to them while we ran (still can’t believe I did that). I played music on my iPod (we did have those) through a set of speakers made by a company that I am sure is nonexistent today. I ran with them when I was pregnant with their brothers. Then I ran with their brothers when they were in preschool. I ran with all of them so often in that stroller that I felt lost when I was without it. Or without them.

I ran for something to do. I ran for us to get fresh air. I ran because it was free.

I ran because I was free.

They rarely fussed in that stroller. For however long it would take us to finish a run, they would be content. And still, to this day, my kids beg to go for a run in it. I rarely use it anymore, though, because if we want to run together now, they can bike next to me. Plus, they’re all so crazy heavy.

But, I caved recently and took all four kids on the greenway for a run. Just to make things easier, the older two rode their bikes, and the little two rode in the stroller (not in this pic). All bajillion pounds of them. 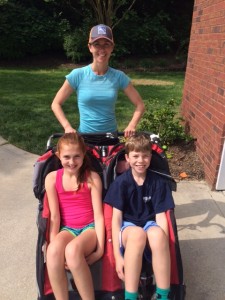 Big surprise. I felt so free pushing them. I felt SO young that I am now convinced that the stroller is the Fountain of Youth.

My husband keeps hinting that the stroller needs to go. The kids are all in school long enough now that I can get a run in without the “hassle” of a stroller, and it takes up valuable garage real estate. The other day he went so far as to tell my youngest that we were throwing it away. My youngest, who only has five years vested in the stroller, burst into tears, and begged me to keep it.

Please. Of course we’re keeping it.

The five us – my four and kids and I – can NOT get rid of that stroller. We’re like a terrible country song. Now that 2/3 of our family is double digits, it’s the only thing left that reminds us of where we came from and how far we will go. We’ve got miles and miles and MILES left but when I look at the stroller – it’s bald tires, it’s torn canvas, and its worn-in seats – all I can think about is how many miles we’ve already covered and, despite my short stride, how fast it’s gone. And, every time I see it sitting in its spot in the garage, I am reminded of how lucky I am be pushing them forward one {breathless} step at a time.

Ten years ago today I had no idea that I was embarking on a marathon. Thank goodness I didn’t or else I might’ve quit at the Carbo Loading on the eve of his birth.

Smarty Back to School Gear Guide for Moms and Dads

The 12 Days of COVID Christmas

Fitness Feature: Back in the saddle at Flywheel

I was EXACTLY the same! My jump from 1-2 was even bigger than birthing twins #3 & 4! And, don’t fall out of your chair, my big gift was the double Baby Jogger. And I ran EVERYWHERE with them, even to Sharon Prez. Not because I was a good runner, because I was FREE and in control!

Love this Cheryl- takes me back to the good old days when we would walk with Abby and Ava 🙂 Happy birthday to sweet Hunt!!

that’s the first thing I thought when I saw the first picture: gasp! cheryl pre-lulu! Love this. #pace

Cheryl, I love this blog! I have the exact same stroller, sitting in the garage because my youngest is 7 and can’t even begin to fit in it! Can you please explain to my husband why I haven’t gotten rid of it? He’s so annoyed that I haven’t moved it. He doesn’t understand the nostalgia I feel for the days when I would take the kids for a walk/ run with my wonderful dog, who I just lost 3 months ago:(. I long for those days back–such wonderful memories!!

Awesome post! I was glad to know you back then when the first pic was taken! You’re still a rock star and still an inspiration!

I am so proud to call you my daughter in law. What a beautiful written article.

I LOVE this post Cheryl. So sweet and so true. The picture of Baby Ava and Baby Hunt in the stroller just tugs at my heart!!

Great post Cheryl! I had this same exact stroller but in blue. I LOVED it. I can’t imagine why they don’t make these anymore…. Ask Jen about the stroller I had before this:) Unfortunately, we got rid of ours….but definitely some great memories.