The protagonist of Luckiest Girl Alive has the worst name in the history of fiction. That, along with the rather non-literary title and a Publisher’s Marketplace blurb describing the author as a former writer for Cosmopolitan magazine, made me worry the book was going to be the kind of cheesy, vampy, Cosmo-lite kind of thing that gives women’s fiction its occasional dippy reputation. Plus, the novel opens with the main character callously imagining gutting her fiancé with one of their wedding registry knives. I read it anyway, and I’m glad I did. It was not at all what I expected. 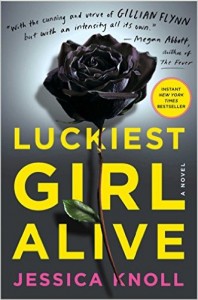 TifAni FaNelli is not your average Emily Giffin-type heroine. She pushes past edgy, and lands somewhere in the realm of disturbingly rotten. As a teen, TifAni clawed her way out of a prosaic home, located just far enough off Philadelphia’s fabled Main Line to relegate her to the ranks of the middle class. Then, after getting in trouble at her Catholic girls school, she transfers to the private Bradley School, an upper-class bastion of wealth. From there, she launches to a small liberal-arts college, and eventually Manhattan, where she scores a coveted job in the publishing industry writing sex articles for a popular women’s magazine. The distinction between tacky, trend-following Middle America and the cultural elite of glossy, moneyed Manhattanites is one that TifAni has battled with an uncool longing all her life. Now that she’s finally integrated into the world of her aspirations, she’s rigorous in her cruelty toward clueless social-climbers: mocking their strapless wedding gowns, their French manicures, their leased BMWs, their giant pretentious Louis Vuittons. Outwardly, she has the perfect life: she’s attractive and stylish, engaged to a handsome, rich guy with a career in finance, and even has a potential offer to write for the prestigious The New York Times Magazine.

But inside, TifAni is vicious, sick, and broken. She ruthlessly attacks her insecurities, starving her Marilyn-Monroe-type body into slender submission, carefully calculating her avant-garde fashion choices, selecting the people around her—even her fiancé Luke—only for their potential to give her what she wants. The only things remotely appealing about her are her intelligence and her relentless honesty about herself. She’s a nasty, unlikable narrator, but she owns it.

It is obvious early on that TifAni—now thankfully shortened to Ani—has suffered some kind of crushing catastrophe in her past. Actually, she survived two such events, one of them so bone-chillingly horrifying that even now, years later, it is still part of the national psyche. In fact, Ani has been asked to participate in a documentary about the incident, which she believes will finally allow her to tell the truth about what happened, and possibly even address the inner demons that rule her. The storyline of the novel alternates between the present and Ani’s past as a teenager at The Bradley School, where she balanced socially between some brilliant nerds and some hip mean kids, and where whatever innocence she once possessed was stomped to death by tragedy.

Yes, it’s a pretty grim read. But the first thing that struck me about it was that the writing is great. Book editors are all about voice—that undefinable element of writing that feels fresh and authentic and unique. Ani’s voice is believable and different—it’s not a Gone Girl knockoff, like so many ‘dark’ stories. (And I think Ani is a much more realistic anti-heroine than Amy.) It is definitely not going to be for everyone, however; you have to somehow contain your urge to fling Ani into the backseat of a grubby Honda Accord and whisk her off to a session with a church counselor, followed by some shopping at Target and volunteering at a homeless shelter or something. She’s an awful person.

And the events described in the latter part of the book—after the big reveal—are very hard to read. There’s also an exploitative feel to the story; maybe there are some true stories that shouldn’t be fictionalized, and this could be one of them. But maybe they should be. I’ll leave that up to you to decide.