Home Parenting Summer and her Entourage
ParentingThings To Do

Each year, I hold the door wide open allowing Summer to make her grand entrance. Unlike Spring, I don’t hold the door open for her too long because of her hot ways. Once she is in, it’s her entourage that really interests me. Traveling with Summer, comes laid back mornings, schedule free days, late nights, spontaneous road trips, frozen treats, lake time, planned beach trips, lazy days, and time for new discoveries. But this year, it seems Summer has brought someone else along with her: Magic. As soon as Summer arrived, the kids hurried to the door and took Magic’s hand. Neither of them have let go since. Inseparable. Magic seems to travel all around the house with them. She sits with them on the couch, eats with them, roams room to room participating in whatever activity is going on, jumps in the car, and even goes out into the yard. Magic seems to be everywhere, only I cannot see her. When I ask the kids what she looks like, they shrug their shoulders in bewilderment. “Who is mom talking about?” they ask themselves all wide-eyed.

Who am I talking about? I am talking about that mysterious presence in our house who picks up all the shoes by the front door, removes empty wrappers from the couch, puts plates into the dishwasher, and picks dirty socks up from around the house. It is amazing what Magic does! She seems to have endless energy and intuitiveness. Magic unzips backpacks to retrieve wet towels and suits, finds jars of bugs left on bedroom floors, empties snack containers that end up in wrong places, and keeps up with countless water bottles and glasses around the house. The kids started to realize Magic would appear if they left their clean laundry sitting around long enough. Didn’t they appreciate the fact that Magic already cleaned their clothes? 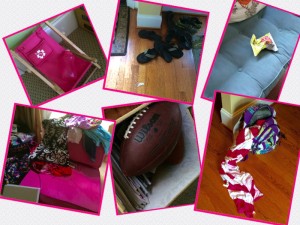 I asked my kids, what is it like to have Magic around? After they finished singing her praises and putting their arms around her waist while giving her sweet kisses, I let them know that Magic is leaving. In fact, I have asked her to leave and never come back. The only way Magic could have stayed, is if she started picking up after me. Well, that didn’t seem negotiable and dead ended that conversation. I agreed the rest of Summer’s entourage could stay ONLY if Magic was not let back into the house. In Magic’s place, a tidy checklist now hangs in sight. While they may think the glory days of summer just ended, they will one day appreciate the character that was developed alongside responsibility. I will hold the door wide open every summer for Summer’s entourage, as long as character and responsibility come through the door with her (without Magic). Is Magic in your house this summer? 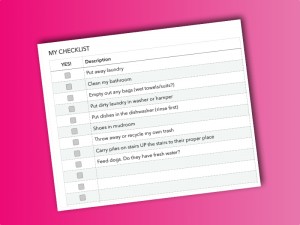 Monogramming in less than an hour

Kids on the Bus, Mamas to the Barre...