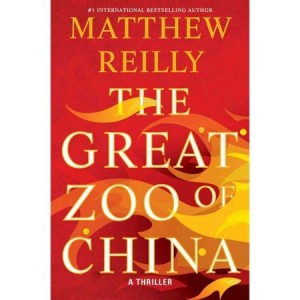 So. I personally have written 1.5 as-of-yet-unpublished novels, which does not exactly qualify me as a world-class writing expert. But consider the following examples of dubious editing I discovered in this week’s reviewed book:

—A tendency toward superfluous adverbs: “He was foully eaten alive.”
—When things get exciting there are a lot of exclamation points!

Most editors would be all over that kind of thing, but the editor on this work must have been very relaxed. Whatever, you are not going to care. You aren’t reading The Great Zoo Of China for its exquisite prose or its thought-provoking insight into the essential nature of man and beast. You are reading it because it is a stomach-churning, nail-biting, edge-of-your-seat adventure story, starring a fearless and supremely competent female herpetologist who is about 1000 times cooler than you.

What’s a herpetologist, you ask? It’s a zoologist who specializes in reptiles. Specifically, CJ Johnson focuses on crocodiles, which would rank just below Septic Tank Declogger on my list of desirable careers. Crocs are hideous in every way: fearsome, vicious, smart, brutal. They are butt-ugly predators who can be up to 18 feet long, and they sometimes observe the habits of humans in order to lay traps and ambush them, dragging their prey underwater to be devoured. (This actually happens to CJ, although, of course, she escapes.) Crocodiles pale in comparison, however, to the animals that CJ encounters during a visit to China, where she has been sent on behalf of National Geographic magazine.

Things go really well at first. There are private jets, luxury hotels, deferential and obsequious Chinese guides who profess themselves available to meet any need. CJ and her brother Hamish—who is tagging along as the article’s photographer—are taken to visit a zoo that is literally the greatest wonder of the world: an engineered masterpiece of man-made waterfalls, rivers and mountains with beautiful, state-of-the-art facilities. We all know from watching the Beijing Olympics that the Chinese have no hesitancy about blowing it out when they want to impress the rest of the world. And they desperately want to impress the rest of the world now. They are longing for the one thing at which they cannot manage to best the Americans: cultural superiority. They want to be cool.

CJ and Hamish and the rest of the entourage—an American ambassador, his supposed assistant, some New York Times writers, a few Chinese Politburo fat cats—soon learn what is so special and different about this particular zoo, which the Chinese are counting on to launch themselves into worldwide cultural dominance.

The zoo is for dragons.

I won’t go into how they got the dragons, except to say you are going to have to suspend any pesky tendency toward logic that you might possess. Roll with it. The dragons are amazing. They’re enormous—they come in three sizes: princes (nine foot tall sinewy killing machines), kings (the size of buses, also sinewy killing machines) and emperors (the size of jetliners, with fangs the size of human beings. Needless to say, also quite efficient in the killing arena.)

Naturally, it takes no time at all before all hell breaks loose. The humans have just wrapped up the first portion of the tour—the strength of the novel is most evident here because the descriptions of the zoo are stunning—when the dragons attack. They’ve figured out an ingenious—and quite gross—way to circumvent the supersonic network that is supposed to protect the people from becoming lunch. Now…what do you suppose is going to happen to a hubris-filled Chinese autocrat who plows ahead with a stupid attempt to control the world’s most dangerous predator for profit, callously discounting all lessons from the natural world? Indeed, yes. He gets chomped to bits while cowering in fear, à la the slimy lawyer from Jurassic Park. In fact, the whole novel is a monumental Jurassic Park rip-off, which the author acknowledges is his favorite book of all time. But, actually, it’s hard to hold that against it. I found myself having some anxiety at times while reading it, in case there might be a Red-bellied Black flying overhead here in Charlotte, about to swoop down and disembowel me with a razor-sharp five-foot claw.

Luckily, CJ and Hamish are braver than me. They are cool under pressure, the kind of action heroes who often let fly with pithy, sardonic comments in the face of certain death: “Well, that was character building,” and “*Bleep* a duck,” as buildings explode around them and their hapless companions have their heads bitten off. Unfazed, CJ darts around dodging menace from the dragons and the evil Colonel Bao—there is a maximum human villain trying to destroy her too, of course—until she ultimately saves the day.

As I mentioned, the plot is derivative (although there is one major and endearing surprise that occurs about three-fourths of the way in) but it’s still an engrossing read. Despite my snarky comments earlier, the writing is vivid. If you like nonstop action and carnage, this one is for you.

I’m glad to see that Mathew Reilly is still at it. Is this the first book he’s released since his wife died?