Home Education A family of six and a ski trip. It can be done.
EducationHealthParentingThings To Do

A family of six and a ski trip. It can be done.

I never thought we’d see the day when my entire family of six would take a ski trip. It just didn’t seem possible – or even realistic. Four kids ages 4-10 and two adults (who haven’t skied in years) suited up, on the mountain, and happy? Seemed like a fairytale to me.

Well, over the holidays we wanted to do something different for the kids. My husband and I decided it was time we made more of an effort giving our kids experiences rather than just things (experiences can be a challenge with a big family!). So, one of their big gifts was a trip to the mountains – complete with a day or two of skiing. Our entire family is totally in love with the North Carolina High Country – that area around Boone, Banner Elk, Blowing Rock, Sugar Mountain, and Beech Mountain. It’s SO EASY to get to from Charlotte (about 2 hours and 15 minutes door to door), the people are some of the friendliest around, and it’s gorgeous. Watch a sunset over Grandfather Mountain, and you’ll be sold, too. Actually, here’s a sunrise over the mountain (#nofilter). Sold, right? 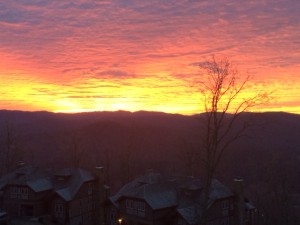 Anyway….the skiing! WE DID IT. (That’s huge for us!) And, I can promise you this – the ONLY way we were able to do it is because of Beech Mountain Ski Resort‘s awesome ski camps. Here’s the gist:

My three older kids wanted to snowboard, so I put them in the Burton Learn to Ride (LTR) program. If you haven’t heard of this, listen up. Burton LTR is a nationwide program for beginner and progressive riders who want to test their skills out on the snowboards. My kids had the MOST FUN and best instructor who helped them every step of the way. By the end of the day, my older two kids were full-fledged snowboarding, and my seven-year-old had (almost) mastered the bunny hill. Beech is the only resort on the east coast to have it – all the equipment is made specifically for beginners (we went back the next day and rented snowboards at a local ski shop, and my kids said they liked the Burton gear waaaaay better). All the equipment for the program is included (helmets, too) as well as lunch and snacks. Best deal EVER. I could never have taught my kids how to snowboard because, um, I can barely ski. So the Burton LTR folks gave my kids such a gift – a lifelong skill and pride in themselves for accomplishing such a biggie. 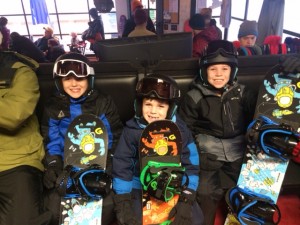 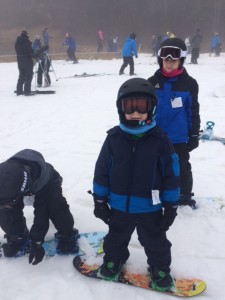 (I would’ve had more pics, but it’s a very precarious thing trying to take pics without taking off your gloves…)

My little guy (4 years old) did the Snow Kamp. I was super nervous dropping him off for the day because he was on his own – no siblings for back up – but the counselors were SO nice and welcoming. He didn’t flinch. We peaked in on the “kampers” from time to time during the day – they were having some snowball fights, playing games, learning to ski veeeerrrrrryyyy slowly, and just playing around. Equipment, lunch, and snacks were also included in this one. When I picked him up at the end of the day, he was zonked OUT on the shoulder of a college girl counselor (probably won’t be the last time in his life like that hee hee) who had been rocking him all afternoon. Loved those Snow Kamp counselors (one of the counselors took this pic for me during the day and sent it to me :-)) 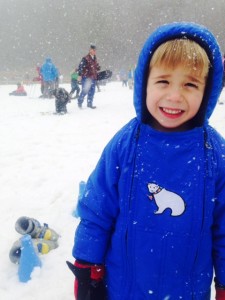 The best part of this whole shindig? My husband and I got a ski date!!! Our friends just happened to be on the mountain at the same time, and after some last minute planning, got their kids in the camps as well so we were able to ski the entire day with friends (I am using the term “ski” very loosely with here. Our patient friends were gazelles on skis; my hubby and I were hippopotamuses. But we tried and HAD FUN!) Our most favorite part of the day was chilling out in the bar on top of Beech Mountain. Yummy locally-brewed beer, homemade granola bars from the cafe, great convo with friends, all with just a (slightly humongous) downhill staring at us on the way down. Doesn’t get much better (except that pesky downhill). 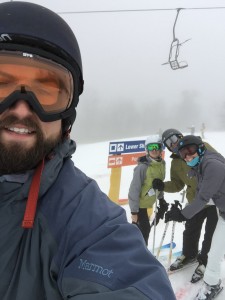 If you’re thinking of taking the kids to ski, try Beech Mountain first! It’s easily a day trip if you want it to be and it’s Smarty-tested-and-approved. We’re going back in February – the kids can’t wait to dust off the snowboards, and I can’t wait for those yummy homemade granola bars. The terror from skiing downhill is totally worth those little bites from heaven. 😉

For more information on Beech Mountain Ski Resort, go to their web site. They have more chances to learn to ski and snowboard than just what our kids did. Check out the full list for kids and adults here.

And here are a few of my Smarty tips for skiing for the first time with kids:

– Borrow or buy snowsuits, snow boots, gloves, and goggles. Be prepared with the right gear so you have minimal complaints. This includes YOUR gear. I will go to the ends of the earth to make sure my kids are comfortable, but then I show up in the snow with jeans on. This time I didn’t make the same mistake. I bought waterproof ski pants last season when they were on sale and got a REAL ski jacket on clearance. Made all the difference in the world.

– Rent your ski gear off the mountain. There are plenty of ski gear rental places around mountain towns (and even some in Charlotte if you can pack the skis!) and lines will probably be better at those. We rented ours from Ski Country across from Sugar Mountain. Those peeps couldn’t have been nicer.

– Be dressed and ready for skiing before heading out. The first day we skied we got dressed in our car. Four kids and two adults. It was a nightmare. The second day we wised up and were totally ready when we rolled into the parking lot. Much better.

– Get there when the doors open. Lines can get long during holidays, and you want to get in line first for lift passes.

– Bring just enough to get by. Credit card, car key, and driver’s license is all you need. Don’t bring a bunch of stuff – you’ll just have to shove it all in a locker, and trust me – when you’re traipsing all over the place in those terrible ski boots trying to keep up with a bunch of kids, the LAST thing you want to do is deal with a locker.

– Skiing is always the worst when you arrive and when you leave. Accept that it’s going to be really tough to get going and really not fun getting back to the car. Know it and own it. Everything in between is worth the bookend challenges.

– Gear the kids up for a challenge. Get them excited at the idea.  The more you pump it up, the better it’ll be.

– Have fun and laugh at yourself (if you’re a beginner like me). No one knows you when you have ski goggles on. Roll with it and ski like no one’s watching. Because they aren’t – they’re all too worried about busting, too.

Hope this inspires you to get out the door and just give it a try! Promise it’ll be worth it!

Fitness Friday: Join in on the Pure Barre...

The only thing that I would add is to pack snacks. 🙂 I have my kids pack a granola bar and a fruit leather in a pocket every time we ski. The lines for food can get long too-especially, when you have hungry kiddos around! I am glad you had a terrific trip. We ski a lot in the NC mountains and finally have it down to a science, but it took years to get there (this was the first year that all three kids can ski on their own! It’s a beautiful thing!)

Hooray for you and your family! “Skiing is always the worst when you arrive and when you leave.” Isn’t that the truth! Sometimes it’s hard to get past the thought of how much trouble it is and I only have 2 kids to wrangle. Is it really worth it? YES! Thanks for reminding me to “own it”! All the troubles fall away once you’re on the mountain. So glad you all had a great experience.

Loved this post! I took Kate to Appalachian Ski last winter and look forward to being able to go with the entire family one day. We will have to check out Beech! And stop avoiding the mountains until the pool opens. Ha! Hope to see you up at Echota one of these (summer) days!