Channeling my Inner Audrey Hepburn as a Parent

Taking away Annie’s pacifier (at age 2) was, at the time, one of the most difficult things I had faced as a parent. It was brutal as she also learned to climb out of the crib the same night. It was a dreaded day on many accounts. Bedtime quickly went from a 5 minute beautiful time to an hour long dreaded ritual. As I shed tears over my frustration at the park to my dear Mom friends one remarked, “is it really that you are frustrated with Annie, or are you just frustrated with your new reality?” Her words hit me like a ton of bricks. Annie was coming into her own as a two-year-old. She was learning to express her opinion and stand up to change. This was my new reality. 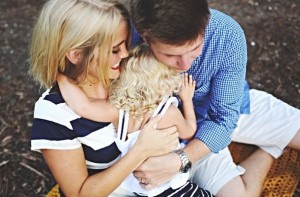 The two’s have been a rollercoaster. I go from adoring my child so much to reigning in my screaming two minutes later. It has not been easy for me and to be frank, I think I was completely unprepared. Most parents talk about how horrible their two-year-old is, but what about the parent? I’ve been shocked at my own behavior. Is that embarrassing to admit? No, I’ve never spanked etc. but at times I’ve been downright angry with this child who is beautiful, innocent and mostly doesn’t know better. I’ve been too harsh, and yet I’ve babied too much. It’s been, perhaps, the most humbling year of my life.

I’ve learned to have patience for the mother in the grocery store who is short with her child. She’s imperfect just like me. I’ve eaten my words as I’ve bribed with goldfish or a TV show. I’ve read multiple books, tried new techniques and worked to reign in my impatience. As a child, harsh, loud words made me cry at the drop of the bucket; yet, I’ve found myself raising my voice. My heart breaks as I think how it must feel when I lose it over silly battles like wearing a tutu to Target. I am nearing the end of the terrible twos and still debating if the three’s will be terrific or terrifying. I’ve learned a lot this last year. A lot about Annie, myself and my husband.

At Annie’s 2.5 year-old well-check I was working through the packet where you mark off “milestones” and realizing that tantrums, expressing their own (strong) opinions etc. were all things she needed to “accomplish” at this age. They were all a part of her development. I was shocked and relieved. It had been a particularly difficult week and when we started to talk tears just welled up in my eyes. I told my pediatrician that I simply didn’t know how to handle tantrums. I was relieved to know that for Annie, the tantrums were a good sign of her progression. But I needed help, not my child, me. She walked through some of the books I had read and troubleshooted with me for awhile. As the conversation went on she stopped me and said, “I think you need to know that by the time she is five she is going to be a lovely little girl.” She continued that my goal should be to set an example of how to act, to respond to tantrums like a classy Audrey Hepburn, to be unscathed by them.

I’ve been channeling my inner Audrey now for several months and I am astonished how much it has helped. Mirroring her tantrum behavior with my own adult version of a tantrum got me nowhere. I’ve learned that I can ask dozens of parents for their advice and no matter how well it works for that Mom and that child, it may not work for me. I’ve had to find my own groove. Harsh time outs didn’t work for me. They felt unnatural and often made my blood boil more than Annie’s. But “Hepburning” my way through the tantrums and comforting her when it was over has been my bread and butter.

Just like a year ago when I faced my new reality with bedtime, I am still facing many new realities with an almost 3-year-old. But I am slowly learning that change is the only constant in parenting. I have to learn to adapt, to forgive myself and ultimately set the best example. No parenting book or strategy will be more effective than the simple example of a calm, collected mother. If you need me, I’ll be over here trying to solve the sharing debacle like the graceful Ms. Hepburn. Until then, I tip my hat to all of you mothers. How wonderful you are.

Smarty Alert: Fly with a Friend and get...

From our friends at The Produce Box: How...

Lucky Me, Lucky You!

What to Say to a Bully