Over the years, I heard rumors of another automotive-engineer-turned-stay-at-home dad in South Charlotte, but I thought this talk was all Urban Legend until I finally met him over two years ago. Of course, we hit it off right away, and I’ve really enjoyed getting to know him better (and no, we don’t just talk about engineering).

He has been able to take the skill set that made him a highly successful engineer and translated it into being an equally successful stay-at-home dad. Brian is an amazing father to his two children and an incredibly supportive spouse for his wife and her career (he even does the ironing) – he’s also really active at the kids’ schools and in their extra-curricular activities. He even finds time to sharpen his bowling skills every Monday night on his bowling team – see what I mean? Sounds like an Urban Legend, right? Well, he’s not. He’s the real deal.

It’s my pleasure to introduce you to Brian Tenholder. 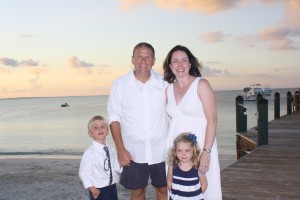 What was your career pre-kids? I was a plant metallurgist for Schaeffler Group and then I was purchasing manager for Midrex Technologies.

When did you and your wife decide for you to stay home? As soon as we started talking about kids we had started the discussions about me staying home. It wasn’t such an easy decison as one would think. I waited a year and I struggled with giving up the best job I ever had. I really enjoyed all the world travel I got to do. However, since the first day I was at home with our son (and later our kids) the only regret that I had was not doing it sooner.

Did you instantly know that staying home was the right decision for you and your family, or did it take some getting used to?  I had an awesome job and traveled all over the world, so I selfishly didn’t want to give that up. Therefore, we had a nanny for Peter while he was an infant. I was in Cairo Egypt for a few weeks while Peter was nearing his first birthday. I missed him and knew I was missing things at home. I recall focusing on the fact that the kids are only young once but the job will always be there. The other thing that made me decide to stay home was someone reminded me a man’s gravestone never said he was an amazing worker.

What surprised you most when you decided to quit your job and “father” 100% of the day?  How much attention a child needs and how the whole day’s schedule revolved around the child’s napping schedule. I remember not being able to do a lot of things I wanted to do because we had to be back in time for a nap. We neurotically made certain that the first kid got 2 naps at home at the same time every day and a rest time every afternoon up until Kindergarten. The second kid is always a different story. Sarah napped wherever we were going or in a stroller where we happened to be. She is only 4 and I cannot remember the last time she napped or had a rest time. Thankfully she rolls with it.

I was also surprised that as soon as I get up the day is going at full speed all day long. I remember the quiet drive to work, stopping and getting a spicy chicken biscuit and Coke Zero, then arriving at work and checking emails for an hour in my quiet office before meetings began or things slowly got rolling for the day. Now it is full speed go from the moment I get up until the kids are asleep.   I’ve had to get up numerous times while just answering these questions to help Sarah with My Little Ponies, fix her hair (which I am overly cautious about after finding she had cut off the end of her pig tails last week despite a household mantra that “scissors are only for paper”), and to rescue the cats from Sarah’s zealous play.

What’s your favorite part of being a ‘Stay-at-Home Dad’? Taking as many vacations as I can with the kids. I don’t have to worry about how many vacation days I have left in the year. I get to do the things I enjoy and share the experiences with my children while providing them with great memories. The key is to get out and do things every day and make the most of the kids time off in the summer and breaks.

What’s the most challenging part of being a ‘Stay-at-Home Dad’? Keeping everyone happy and schedules maintained. It really is a juggling act.

You’ve done an admirable job of being involved with your children’s schools and integrating yourself with the moms. What advice would you have for other stay-at-home dads that want to get involved but feel intimidated/out of place and hang back instead?

Just get involved and start talking to other parents. I started with joining the Rock Hill mom’s group because it welcomed stay-at-home dads. Now, a few years later, I have been President of the Parent Council at my children’s’ weekday school, I have run school fundraisers and dinner events and auctions, I am involved in committees at the elementary school, I am a Cub Scout Den Leader, I volunteer for early school drop-off and am active in each of the kids classrooms. Seeing the other parents at school pickup every day is my equivalent of afternoon gatherings in the break room at the office – you just find a new normal.

You took on a pretty ambitious summer travel schedule. What did you do? The day school got out I had the car packed and had Sarah and our good friends’ 6 year old with me as we started our first summer trip. Our destination was Smuggler’s Notch resort in Northern Vermont. We picked up Peter after school, and the 3 kids and I drove to Washington DC where we stayed for 3 nights and toured DC for 2 days. The kids loved the subway rides the most, but they also really enjoyed seeing the White House and touring all the museums. We then drove from there to Gettysburg, PA and Hershey. The kids loved Hershey and still talk about it. Gettysburg? Not so much. From there we drove through Manhattan, just so we could say we did and we stopped in Providence, RI. No, Providence isn’t on the way to Northern VT but when else we will get to RI? We toured a bit in Providence and then we drove around Boston for a few hours because it was rainy. We then continued through NH and into VT where we met my wife and friends who did not brave the car trip but flew instead. It was a great week getting up to VT and we all have great stories.

Last winter my wife decided to take the SC bar exam in July so I used that as an excuse to get out of her hair so she could study and take the exam during the month of July. On July 5th we left for a second summer trip. Me and the kids left Charlotte and headed West. We were gone for a month. We camped in KY, visited family and friends in St. Louis, and visited friends in Kansas City before we continued on. We drove through KS, wow it is flat and desolate as I remember from my childhood, and then we camped in Loveland, CO for a week where we went into Rocky Mountain National Park for a few days and toured Denver. We also camped in the Black Hills of South Dakota and went to Frontier Days in Cheyenne, Wyoming. Probably the highlight of the trip for me. On our way home we visited friends in Omaha, NE (amazing zoo in Omaha) and stopped again in St. Louis.   The kids loved camping and they got to be kids. We saw aquariums, zoos, 2 baseball games, a sod house, an original pony express station, Deadwood, SD, Sturgis, SD, where Kool-Aid was started, Casa-Bonita in Denver (look it up on YouTube if you don’t know), boating and swimming in the Mississippi river, civil war battlefields in KY, a real rodeo, Mount Rushmore, Crazy Horse, a real saloon, brewery tours, ipad left in the pouring rain outside the tent one night (my fault), amazing BBQ in KC, and a flat tire in nowhere Iowa. 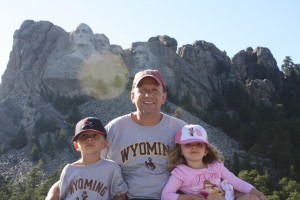 I drove over 11,000 miles this summer with the kids and we made lots of memories. They have now been to 30 states and I guess it was worth it as Jolie did pass the SC bar exam. I am trying to figure out another test she can take next year so we can have another excuse to pack up the van and go somewhere else. (Prince Edward Island is what I have my eyes on…).

What is like being married to a powerful attorney? I would like to think she is partly successful because of all the work she doesn’t have to do at home. Probably not true – she would be successful no matter what she wanted to do. She works hard but then we take such fun vacations. It is fun for me to watch her succeed.

What do you do in your free time? Really, Free time? Well I do like to run for fun and will be running another half marathon in Las Vegas in a few weeks. Our daughter said last year on a Father’s Day questionnaire that her Dad’s favorite sport is laundry. I guess I am now officially an athlete for all the laundry I do.

Favorite fall activity with the family? Going on bike rides on the greenway and seeing the all the leaves. We also really enjoy running the Runway 5k every year as a family.

Best date night restaurant in Charlotte? We really like Ilios Noche for a drink and then our favorite date restaurant is Chima.

Last book you read? “A Terrible Glory – Custer and the Little Big Horn” Great book and decided to read it after we were out west and in that area. Before that I read “Unbroken” which Cheryl Perry and her Dad recommended to me and it was one of the best books I have ever read. I am looking forward to seeing how Angelina Jolie makes the book into a movie.

Stay-at-home dad’s secret weapon? A mini-van and never have a hungry kid. Nothing gets accomplished when a kid is hungry or, as Jolie would say, when I’m hungry.

What one piece of advice will you give your kids when they graduate from college?  Do what makes you happy and fulfilled. Have a hobby, a career, or other occupation or endeavor that makes you proud of who you are.

Smarty Scoop on Weekend Events: May 8-10

From the Smarty Education Corner and Trinity Episcopal:...

From the other Jolie (the “stay at home/non-attorney” version). Thank your Zack for featuring Brian. I was so excited to see this!! Brian; Thanks for sharing all of your stories and summer adventures with us!! Such a great Dad and attorney supporter!! You listen to all of our truly “mom” issues without missing a beat 🙂