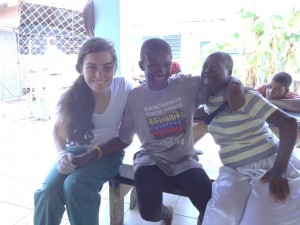 Images of white sand beaches, crystal blue water, tropical fish and birds, luxurious resorts, and happy tourists instantaneously appear when you google search ‘Jamaica.’  However, when I visited this exotic country over spring break, I saw a completely different side of Jamaica.  I saw poverty, sickness, and famine; but even in the midst of that, I saw happiness, and I saw hope.

Every year, my school offers a mission trip to Kingston, Jamaica that allows students to work and stay with the Missionaries of the Poor.  Initially, I thought this would be a great opportunity to meet new people, travel to a different part of the world, experience a different culture, step out of my comfort zone, make a difference in the lives of those less fortunate than I am, etc.  But, it was so much more than that.  So when I stepped on the plane the morning of April 14th with 16 of my peers and 3 chaperones, I truly had no idea what was in store for me over the next week.

On my first full day in Jamaica, I went to The Lord’s Place, a center established by the Missionaries of the Poor for women who had been abandoned by their friends and family or who had mental and/or physical disabilities.  My friends and I asked the brothers working there what they wanted us to do, expecting that it would be some form of manual labor, but in turn we were told to “just be with them.”  I soon realized that I wasn’t there to “help” these people, but to make them smile.  These women had no belongings besides the clothes on their backs, and the only thing they wanted was human companionship.  Bereft of friends or families aside from the brothers and the other women living in the center, it would truly make their day when someone showed a genuine interest in them and a willingness to just sit and talk to them or listen to them.  These women helped me to realize that all anyone ever needs is human companionship or someone to show them that they care, and a small, random act of kindness can go a long way.  The people who I served in Jamaica were the happiest people I have seen in my life, and they had nothing.  In spite of this, one of the things they loved the most was getting their nails done.  What seemed like a meaningless task was enough to put a smile on their face for the rest of the day as they picked out their favorite color nail polish and got to be “spoiled” by the volunteers. 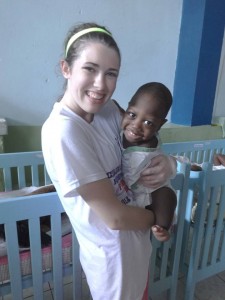 On one of the other days, I was at Bethlehem, a center for children with cerebral palsy or another physical or mental disability who had been abandoned by their families.  There I encountered a two-year-old boy named Bob.  Unlike most of the other children living at the center, Bob seemed to be a completely ordinary two year old, besides the fact that he had only a right arm and a left leg.  Bob’s mother had tried to abort him, but the doctors had failed and in turn he was left with only two limbs.  He was then abandoned by his parents and taken in by the brothers at the Missionaries of the Poor, who treated him like one of their own.  At first, we were all struck with how incredibly tragic the story of Bob’s past had been, but one of the brothers had told us, “Bob is lucky! God gave him a right arm and a left leg! If his two limbs were on the same side he would not be able to crawl around and wreck havoc like he does!”.  In that moment, we no longer took such pity on Bob, who had an eternal goofy smile on his face, would do anything to be held, and who loved nothing more than being the center of attention.  This silly two-year-old was a perfect reminder that we should always count our blessings in our life, not our problems and to take everything life throws at us with a smile.

Later that week, I began to realize how trusting and kind the people in Jamaica truly were.  They took southern hospitality to a whole new level!  Many of them had almost nothing but everyday they would prepare us fantastic meals and do everything in their power to ensure that we were comfortable.  It wasn’t long before we forgot about the comforts of America and began appreciating what we were given.  One day we were served ice with our drinks for lunch, which was the greatest luxury any of us could imagine having that week, and it was something we didn’t even realize we take for granted everyday.  Similarly, on Holy Thursday we went to a mass with many of the Jamaican people, and we partook in a washing of the feet ceremony.  In the middle of the service, everyone went up to the front of the church and had water poured over their feet by a perfect stranger.  We then switched roles with the person and thanked and embraced them.  It was one of the most humbling experiences I had that week. 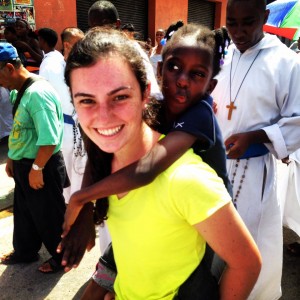 My favorite part of the entire week however, was the Stations of the Cross on Friday.  That day we walked in a large group through the streets of some of the worst parts of Kingston.  As we passed by civilians, they stopped whatever they were doing and watched the brothers, and many of them joined the procession.  As we walked, young children from the street would join us and ask for piggy back rides or hold our hands.  Mothers who had never seen you before in their life would hand off their infants and trust that they would find their way back to them.  Having been a child who wouldn’t stray one aisle away from my mother in the supermarket, the whole experience seemed very strange to me.  At the end of the procession, we all walked into mass with two to three children either in our arms, on our back, or holding onto our hands.  During the mass, the children sat in the front rows of the church without their parents and I had two young girls come up to me, address me as ‘Miss,’ and ask if they could braid my hair.  Later I walked up to the alter with them as the entire congregation rose from their seats to kiss the crucifix.  After mass, I said goodbye to all of the children, who simply walked out to the street, without being even slightly worried that they hadn’t seen their parents in hours.  It astounded me how easily they could trust strangers and how much respect they showed for everyone around them.

I am truly thankful that I was able to participate and experience this mission trip to Jamaica.  It was a perfect reminder that we always have to be thankful for what we have in our life and remember that there are always people who have more troubles than we could possibly imagine.  As we go through everyday, we should always take every opportunity we have to make another person’s day better, and in doing this we will always be happier.

Building emotional intelligence and strength through adversity and...

kixx is for kids!

Take care of your sun damage this fall...