When my wife and I moved into our current house right before our first child was born in fall of 2003, there were a number of moms with children outside most days. Honestly, it was a bit intimidating and, at first, I was concerned about fitting in our new neighborhood. 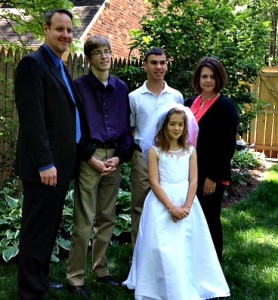 I soon realized that the family next door had a dad that met his kids at the bus stop every day and spent countless hours outside supervising them as they played in the cul-de-sac almost daily. I was relieved and we soon became friends. Since his eldest child is eight years older than my eldest, he has been a valuable mentor as I have watched him deftly handle all the duties of raising three children, volunteering at their schools, managing extracurricular activities for all his kids, being president of the homeowners association (he talked me into being VP) and acting as the general contractor for a major addition to his home. He is also a skilled advocate for his and others’ children and is quick to help anyone he sees can use a hand.

I would like to introduce you to my neighbor, friend and fellow stay-at-home dad, Brad Strouse.

You have a pretty unique family. Tell us a bit more about it.

My wife and I met at Appalachian State University where we became best friends. After graduation I moved to New Jersey where I took my first job as an Environmental Contractor. Marijke moved back to Charlotte and joined her parents in their trading company. We continued to meet frequently (many miles on the cars) and our relationship grew into much more. I quickly realized what I needed to do and called her dad to ask for her hand. He gave permission and asked whether I would be interested in working for myself and start a domestic distribution company, as he had done many years ago with his wife in South Africa. So I moved to Charlotte, married Marijke and we started our own company together alongside her parents.

Fertility issues were a known hiccup for us and the insurance for treatments, surgeries and medications were too expensive for a small company. Marijke branched out and started her career at the bank while I stayed at our company. After years of failed IVF attempts we decided it was not in the cards for us and we decided to take a break. During that time, we hosted a 30th surprise party for a friend, and a couple attended that had just returned from Russia with a beautiful baby boy. Is this a sign? We spoke with the couple separately and inquired about their experience, the cost and duration of the International Adoption journey. Later, after the party, Marijke and I just looked at each other and agreed “That is what we HAVE to do – we are going to Russia”. It was a fortuitous moment that set us on the path to go get our boys and bring them home!! We still have fun with the fact that our family members were born in three different countries on three different continents (Russia, South Africa and the United States of America).

The decision to adopt gave us a sense of renewed hope and strength that had been taken from us through all the years of failed fertility attempts and not to mention the cost. My “new job” became completing and submitting paperwork, paperwork and more paperwork. Our lives became consumed by home visits, certifications, health records, court appearances and waiting! The entire process took about 9 months, and we brought Nikolai (23 months) home in time for Christmas (1997)! After vowing NEVER to return to Russian in the winter, we did so again two years later and returned with our second son, Alexei in time for Christmas (1999). Then in 2006 our little “miracle girl” Chloe arrived all on her own. What we thought impossible for the last decade was not! NONE of these events would have been possible without ALL the great support of our friends and family…

We learned SO many things on our trip to Russia about the adoption process and we would never trade our experiences for anything. For example, there were different views on International Adoption (which most shared unsolicited); difficult government specific processes to figure out – most were unique to the region, state and country; medical conclusions that could differ quite a bit from doctor to doctor; and each culture had its own belief system and traditions that were important to each and rightfully so. Although all of this was overwhelming to us at the time, we will never forget our visits to the “baby home” or orphanage. It was wonderful to meet and play with all the children and also heartbreaking to leave them behind. Our orphanage was a “good” orphanage and the caregivers were proud of their children. They definitely did their best with the very little available resources to them.

When did you and Marijke decide that you’d be the primary caregiver?

After returning home from Russia, we decided daycare was not a good fit for Nikolai. We thought the best way for all of us to “bond” was for him to be with at least one of us 100% of the time…at least in the beginning. We wanted to reinforce with him that we were his permanent family and that we would never leave him. We discussed it with Marijke’s parents and they were all on board. As a result, Nikolai became the first of our 3 kids to “grow up” at/in our company. He came to work with me every day, where we ate lunch, enjoyed coffee/tea breaks together and took his naps in a dedicated room. His grandmother spent many hours entertaining him at his “desk” that we set up in her office. Out of our family’s need, things just slowly evolved and I became the “stay-at-home” dad. The flexibility of working for myself allowed me to spend any extra time during the day with my kids. I became the parent to drop-off/pick-up at preschool, attend birthday parties, be the field day chaperone and sit in many waiting rooms at speech and sensory therapy sessions.

“Stay-at-home” is still such a misnomer to me. You don’t ever stay home! You are constantly shuttling your kids from one place to another whether it is for play dates, school, sports, doctor appointments, grocery store, mall, etc….and the “home” becomes the pivot point. It is the family place where you get recharged, where you feed them, organize them and then transition to the next activity/place.

What was it like being the only dad in the preschool mom’s club?

My earlier experiences (now 16 years ago) with being the only dad in the all mom groups, were a little unnerving. The moms would huddle together and talk, while I would roam the outskirts of the room and look for something that I could do with the kids. Sometimes I would get a glance but conversation was not a routine occurrence. I would throw out open ended questions and then get a polite “not sure” and that was about it. The awkwardness continued with the teachers sometimes, who would during classroom meetings “thank you to all the mothers and, um, dad, for helping out during the classroom event”. This would go on for months and though it did get better the longer I knew the other mothers, it would continue to be a tough nut to crack at the beginning of each classroom year. Of course, today it seems much more routine to have other dads in my situation and it is great to have some camaraderie!

What is the most challenging part of being a ‘Stay-at-Home Dad’?

The most challenging part for me is something I’ve struggled with over the years. It is being with the kids 100% of the time and the guilt of not being in the typical corporate world participant, like so many of my friends. It seems like my networking circle has grown smaller and smaller over the years as my interest shifted. The “stay-at-home dad job” was totally new to me in the beginning, with virtually no male mentors to share my experiences and concerns with. I would reach out to my dad on difficult days (his career had been in the corporate world) and he would affirm back to me, that I was doing the right thing for our family and he would point out the advantages I have as their dad and primary caregiver. My dad worked a typical corporate workplace schedule and he could appreciate the things that I get to enjoy with my kids, which he did not always get to. Over the years, when I hit lows, I would frequently think back to those conversations with my dad and pull from it to give me renewed strength.

Today I enjoy the support of other stay-home-dads and I hope I can share some of my experiences to help those starting out on their new adventure, whether it is to lend a helpful hand or hammer.

Favorite Summer Activity with the Family?

Our family trips or activities usually revolve around the neighborhood pool, beach or getaways to the mountains. We live on a GREAT cul-de-sac loaded with kids of all ages so there is always someone for the kids to play with, along with last minute cook-out/adult get-togethers. The kids have aged up so the older boys are often in one house, younger girls in another and the youngest with the adults. There is truly never a dull moment!

Now that the kids are older we sneak out for a nice dinner pretty regularly. Places we like to visit are Paco’s Tacos, Village Tavern, Brio and of course the Cajun Queen for their BBQ Buffalo Shrimp appetizer. Plus, it is awesome to have our own built-in baby sitters!

The last book I read was…wait for it….. “The Friendship Matchmaker” with my 8 year old daughter, Chloe. I learned the following: BOBF stands for Bus Only Best Friend and MAK stands for Make And Keep friend. I really DON’T know anything anymore….

If I knew of one I’d probably be rich! However, I have learned that each of my kids requires their own type of motivation to achieve positive results. As the kids have grown, my arsenal has had to evolve as well. Threatening to boycott any “driving” for the new drivers, or revoking X-box time or “no friends” today are some of the frequently used threats in our household.

My TV viewing is restricted to “day after broadcast” episodes of “The Walking Dead” and “Game of Thrones”.

Advice you would give your kids?
I found Baz Luhrmann – “Everybody’s Free To Wear Sunscreen” chock full of useful advice, in a way that might hold their attention versus a lecture from me. (The lyrics are taken from a famous essay, written in 1997 by Mary Schmich, a columnist for the “Chicago Tribune”). Follow this link……..

My Problems with Socks

Are you a Rock Star?