You know the old saying – perception is reality. Too many people like to argue away perceptions about themselves.

It’s always somebody else that is crazy, right? Truth be told – we all have a little bit of crazy in us.

The reality is that if someone perceives something about you – correct or not – it could be worth a second look because perhaps there’s a smidgen or a nugget of truth in there.

Said another way – where there is smoke, there is fire.

I try to find the humor in my kids’ opinions and perceptions.

For example, when my son was learning to crawl and walk, we often corralled him in one of those indoor “play yards”. One day at pre-school, my daughter told her teacher that we put her baby brother in a cage all of the time.  I know this because the pre-school teacher said several days later “I just have to ask about this because I can’t stop thinking about it”. 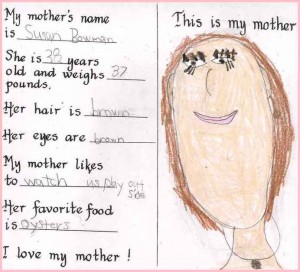 My kids have their own little version of me that lives in their head. They love to take that version to school and sell me out or make me look like an idiot.

My sweet daughter brought home this portrait and bio of me. Do I really wear that much mascara?  Is my freakin chin really that long? No and no. However, that is her perception of me and there’s some truth to it.  She musta drew my face upside down because it’s my forehead that goes on for miles.  And to her, I guess I wear a $hit-TON of mascara.

Notice how she says “watch us play outside” not “play with us outside”.  Well, that is just wrong.  Sometimes I do play with them. I don’t play with them all of the time. Well, normally I tell them to go outside and play with each other. I have no idea where she got that my favorite food is oysters.  She has never even seen me eat oysters, ever.  I am surprised she can even spell it correctly. 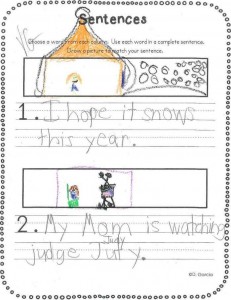 This same sweet girl also illustrated some sentences, one of which makes me look like a total dip.  Why in the world would she draw a TV with antenna (where did she see a TV with antenna?!?)?  Why am I sitting in front of said TV with the caption: “My Mom is watching judge Juty”?

I’m at work when Judge JuTy comes on.  I’ve never watched Judge JuTy a day in my life.  I’m sure her teacher thought I was a total dope.  I love how the teacher corrects “Juty” to “Judy”.  At least she’s paying attention and teaching her that it is very important to know that Judy does not have a “t” in it.

Recently, we were having a conversation about passions and hobbies. She said, “Mommy’s passion is taking care of us. Daddy’s passion is watching TV.” Somebody else needs to work on their perception.

There is no reality, fact or truth.  There is only perception.

The Mom Song With Lyrics

Girl, you are ALL UP in Judge JuTy, don’t lie! Hilarious, thank you for my morning laugh!!

On the plus side, you apparently only weigh 37 lbs!

My oldest son filled out one of these in preschool and under favorite drink it was “my mom likes to drink wine”, great now the teaches think I am a lush, nothing like being called out by a 4 year old! But at least I was not the only mom in the class whose favorite drink was wine!

Dude, crying about Judge Juty. Don’t act like you never watched it.

Very nice! Love this post – it is interesting to see what they think of us.

This made me LOL – especially Doug’s passion. That is totally JP. We need to get them together more often.

I am crying about Judge Juty! Where in the world did EJ get that?? See you at swim team hell in a few weeks!