Home Health It was bound to happen…
HealthParenting

One of my primary goals as a parent is keep my kids safe and help them learn good judgment.  I have done all the right things over the years (five-point harness car seats, baby-proofing the house, bike helmets, cutting grapes…) and it has worked out well for me, until a few weeks ago when my three-year-old broke her leg on a playground slide.  Fortunately it should heal in 4-6 weeks. 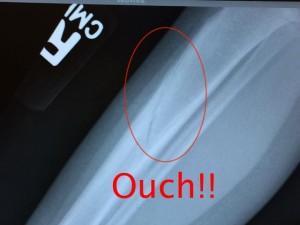 Yep – that is what happened.

We were at soccer practice and my youngest talked an older kid into sliding down the slide with her.  One minute she was playing tag on the playground and I took my eye off her for a second.  The next minute, I turned back around in time to see her in an older kid’s lap going down the slide, saw her foot catch the side for a split second, heard a small ‘pop’ and hoped my gut instinct was wrong.

#@$%@ How did I let this happen to her? Okay, maybe I’m overreacting to her screaming, and she’ll be fine.  I’ll pick her up and try to calm her down.  Not good, she won’t even play with my phone.  Let’s see if I can distract her and see if she can walk on it.  NOPE!  Poor kid can’t even stand on it!

At this point she wouldn’t stop screaming and every parent at practice was periodically looking at her with a sad/concerned face, so I knew that pretty soon I would have to make the call I was dreading…to my wife at work.

I am calling to inform you that I have failed in my duty to protect our children from harm.  I can tell them a million times not to do things we know might end in injury, but sometimes they do it anyway.  I think she broke her leg.  She’s very cute and extremely articulate and talked an older kid into going down the slide with her.  I often catch her asking older kids to go down the slide with her.  It drives me crazy.  I tell her all the time she can’t do that, but she keeps doing it.

I ended up taking her to the OrthoCarolina Urgent Care and, fortunately for us, it was a slow night so we were seen rather quickly.  All told it was less than two hours from the time of her accident to the time it was in a cast and we were on the way home.  Thanks, Dr. Clark! 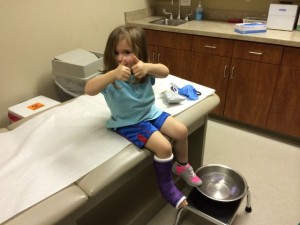 I feel terrible she’s going through this.  She’s going to miss her ballet recital!   You have to stop beating yourself up about this…accidents happen.  True, but they don’t usually happen on my watch.

Life with a three-year-old with a broken leg is pure joy.  We are learning new things all the time.  Since I timed it perfectly, we even had a chance fly to Texas for Spring Break with a broken leg.  My wife had the opportunity to figure out how to help ‘broken leg girl’ use the potty on a regional jet…THREE times in one flight.  For the first week, I had to carry her everywhere.  Now I’m patiently trying to get her to stand up on her cast.  We have a walking shoe for it, but she won’t even put it on, so it’s a pretty slow go right now.  My back aches from having to carry her everywhere again.  (I guess it’s my penance) 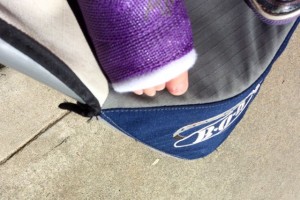 The most important hire you will ever make: A nanny

The Divine Consign Show is Next Week

All I ever wanted from Madonna I got...

Zack, this too shall pass. You will handle it well. Seems you already have. She likes having her Daddy carry her around. A little personal time with you even if you don’t know it.
Love to all…….

Ugh. Good you can see the humor in this. Our kids have tended more towards the stitches and staples types of injuries. Dreading the first cast! Hang in there and thank goodness for Bob.