Smarty Giveaway: Win a family 4-pack to Hubble in IMAX! 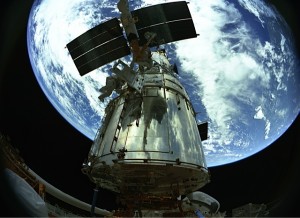 If you’ve ever wanted to travel through space, now you can – without even leaving your seat.

Now showing in The Charlotte Observer IMAX® Dome Theatre at Discovery Place, Hubble takes you on an awe-inspiring journey through distant galaxies and allows you to accompany space-walking astronauts on one of the most important missions in NASA’s history.

Although narrated by award-winning actor Leonardo DiCaprio, the star of this family-friendly film is the Hubble Space Telescope. Launched in 1990, the telescope orbits about 350 miles from Earth, travels at 17,500 mph and is the only telescope designed to be serviced in space. NASA astronauts perform multiple operations on Hubble throughout the film, tasks so daunting that one astronaut likens it to “doing brain surgery with oven mitts.”

As scientists, engineers and astronauts work together to solve the problems plaguing the telescope, the film teaches about overcoming adversity, while providing breathtaking views of distant galaxies, Saturn’s aurora and the birth and death of stars.

Ready to be entertained, awed and enlightened by Hubble in IMAX®?

We’re giving away four (4) tickets to see Hubble, a $40 value! You get to pick the day and time that works best for you. To enter to win:

The fine print: CSP will select one winner via random on random.org and announce in our Smarty newsletter on February 13th– now might be a good time to make sure you are a subscriber! Winner must reside in Greater Charlotte area. One entry per Smarty. You must include your first/last name and email address when leaving your comment, or we won’t be able to contact you if you’re a winner.

Smarty Alert: The 2014 Charlotte Magazine BOB (Best of the Best) Awards are here!

Our favorite books to keep the Book Advent...

The Most Important Words of Your Teen’s Life:...

Very Surry (and a Giveaway!)

Who doesn’t want to get a better look at the planets and space?! Cool…my kids would love it!

I would like to see through the Hubble Space Telescope.
My son would love this!

My son is learning all about space at school this month…..it would be perfect!!

My kids would love to see Saturn’s rings up close!

My five year old is learning all about space this month and is fascinated with comets and the moon. We’d love to go!

I’d love to see the rings of Saturn through the Hubble telescope.

Would love to see Jupiter and Saturn.

My boys would Love this!! Would like to see everything!!

My kids would love this…my son is so in love with outer space right now 🙂 He would definitely want to see the moon up close!!

My daughter is doing a biography on Sally Ride. This would just enrich her studies on space exploration. Think we will go no matter what but would love the freebie!

My kids are very intrigued by space and would love this Imax experience!
I’m excited that it’s narrated by Leonardo too! 🙂

(Although I “liked” and “shared” this article, it’s not showing up on my FB feed. Not sure why….

Would love to win this…..my daughter enjoys all things rocket and space related!

Oh my son would love this!

Would love to see the stars with my kids!!!

My grandchildren would love to see this!

So, as my daughter, Emily, learns more and more about space at school…..her favorite thing to do is to come home and “ask” me questions that i clearly have NO idea the answer too…(cuz who remembers those facts, anyway? from so long ago?) then she loves to give me all her explanations that she has acquired….clearly, this film would enhance my memory and do wonders for our “conversations”…..:-)

My husbands father was a rocket scientist for NASA who worked on the Huble telescope. My kids would love to see grandpas work!

Would love to see Saturn Rings!

How cool is this! Please pick me!