By sheer luck my family saw ‘Frozen’ this past weekend, just in time for Charlotte to turn into Arendelle.  Like the citizens of that mythical village, I’m sure by now everyone is ready for warmer weather to return to the Charlotte area.  The kids had their day (or two) off from school along with an early dismissal, and, personally, I’m thrilled that the kids are back in school. 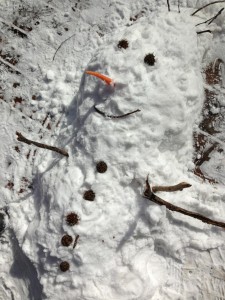 Looking back, here are a few of the highlights from our ‘Frozen’ days.

Do You Want to Build a Snowman?

I bet every family in the South awoke to their kids singing and playing “Do You Want to Build a Snowman?” Wednesday morning when they saw snow on the ground.  Unfortunately in addition to being just a dusting of snow, it was not good packing snow, so snowmen were a bit of a challenge.  We had to get creative and be okay with our snowman lying down on the job.  I have a sneaking suspicion that ‘Olaf’ was most popular snowman name too.  Just a guess.

The Cold Never Bothered Me Anyway!

My kids consented to wearing jackets when they saw snow on the ground!!  I guess snow is visual proof it’s cold outside rather than relying on what I say.  What do I know about the weather anyway?

If I could only convince my five-year-old son that gloves were also necessary.  He only wore them for brief spurts then decided he had to FEEL the snow with his bare hands and ‘shockingly’ would be in tears soon after because his hands were ice cubes.  Clearly he didn’t internalize Elsa’s mantra of ‘Conceal, Don’t Feel.’

Every kid went out in search of their own North Mountain to go sledding down like Kristoff in search of Anna.  It doesn’t take much of a hill for a little kid to feel like they are going down a mountain.  I know I look back on the ‘mountains’ I went down as a kid and think ‘Wow, that’s not much more than a speed bump.’  We have a steep driveway on our street that makes a great sled run that all the neighborhood kids LOVE.  This year one of our neighbors figured out that in the absence of deep snow, tubing is the way to go.  The sled run was open for hours! 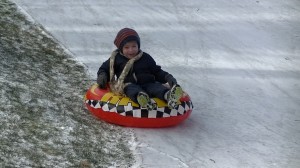 Only an Act of True Love

Based on the conversations, emails and Facebook posts from moms I know on Wednesday, taking kids out in the cold and snow was an ‘act of true love.’

How about you, Smarty parents?  What did you do to enjoy (or cope with) our deep freeze?!  What other ‘Frozen’ references did you see?

Congratulations to our YWCA Giveaway Winner!

Smarty Alert: Kendra Scott gives back to In...

Children’s Theatre of Charlotte: ‘A Sick Day for...

Smarty Giveaway: A week of Rookie Camp at...

Eliminate your catalogs – save a tree.

How will your future chapters read?

we enjoyed a deep gash on the forehead after a sledding run that ended in a brick retaining wall. I am not a fan of snow days…

You’re so right about the snowman. We had not luck. Loved sledding with the kids. I can’t say this snow was that great to sled on though. The ice on our driveway worked the best! The first day was fun, but by day two, I was a bit out of tricks!!

I’m impressed that you remember the name of the region in Frozen. I saw it yesterday and if you put a gun to my head Breaking Bad style, I would-not-could-not tell you it was Arendelle. Equally impressive is that you know how to spell it. I would’ve guessed Arundel.