The Apple Doesn’t Fall Far From the Tree 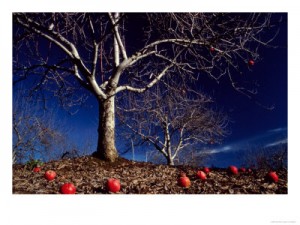 At our one-year well check my doctor warned me against saying the word “NO” too often. She said it should only be used for emergency situations like a kid running into the street, etc. I read up on the matter and sure enough, all of the experts say not to overuse the word. So I jumped on that naive parenting bandwagon. I was determined – NO was simply not going to be used. I was going to redirect all of her energy to a new task and avoid that dreaded word.

But suddenly Annie was even more mobile. She was climbing on every surface possible. She threw tantrums in the middle of grocery store and just like that NO was coming out of my mouth at every turn. And you know what they say, “the apple doesn’t fall far from the tree.” Before I knew it Annie was whipping out her little finger and wagging it right in my face while simultaneously saying “NO, NO!” The chastising didn’t stop at home. Annie took her boisterous NOing to the park, church, family gatherings and department stores. I tried to smile and wave as Annie yelled NO as we left the toy aisle in Target. But despite my efforts it becomes obvious that my daughter has a serious NO problem. And even more obvious was the fact that she picked it up from none other than…. ME. Mom fail.

My child is officially picking up on all of my bad habits. When I get angry or frustrated I tend to make a little quiet growl. Sure enough, Annie has started growling. As she struggles to put on her socks, she growls, as she tries to take a toy away from another kid, she growls. And let’s not talk about my phone. Clearly, my one year old isn’t the one struggling with screen time… I am the one struggling with screen time! I feel like she constantly wants my phone… wonder why?

Parenting has showcased all sorts of surprises for me over the last 18-months but this one tops the list. Half of these habits I didn’t even know I had before my baby started copying me. My toddler is humbling me in ways I never expected.

Just as all this is coming to a head, Annie turns 18-months and it’s officially time for her to go to “nursery” at our church. It’s a two-hour play and learning time with other children. I was restless the night before her big debut. I worried that she would throw tantrums, take toys and wag her finger NO at the other children. In short, I feared she would take all of my bad habits for show and tell. To my glowing surprise, my daughter waltzed into nursery without skipping a beat. She shined her big famous grin and played with the children nicely. There was no NOing and no growling. My husband wrapped his arm around me and said, “it’s because she has a social Mom.”

The older I get the more I realize that the generations before me weren’t perfect, but I never realized it as a kid. Sure, my child yells NO in the grocery store but when it comes right down to it she is kind, smart and happy. She may growl in frustration but at least she’s learning to deal with disappointment. Call me naïve, but I hope that somewhere along the lines my love for my children will outweigh my bad habits that seem to be contagious. A friend recently told me that it’s awfully hard to love your kids and screw them up. I may growl, I may say NO but as for the love part, I think I’ve got that down pat. One point for team Mom!

Smarty Mom and new to the CSP team:...

Smarty Tips on Flying with a Toddler

Karly, I love this and love that you recognize your flaws but know your love, devotion, and positive attributes outweigh them ten fold. You are an amazing mother (I can tell all the way from Utah). You are awesome!!!