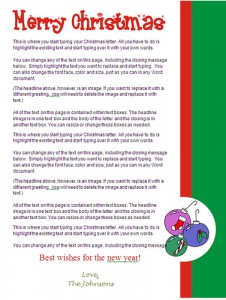 ‘Tis the Season to read about how amazing everyone is! Christmas letter season is upon us! The cards are one thing, but the letters are another. Paragraphs and paragraphs about the perfect year? Please, spare me.

Most of the letters are full of it and I can barely read. A handful, I cherish. I wait by the mailbox for Paul Fredenberg’s family letter. His hilarious breakdown of life as a Farmer/Banker is witty and warming and perfect. His description of raising EIGHT kids on a farm is brilliant, and deserves a Christmas Letter.

Every year I think, I should write one. I should pen a Christmas Letter telling the world exactly what is going on. And so, I did.

2013 was average. We planned great things and did none of them. Not a one.

We took weeks to plan an elaborate trip to Paris with our children. Our goal was to speak only French and force the kids to dine on crepes. Instead, we took a Disney cruise with all the other Americans. We ate burgers and chicken fingers.

We don’t own any vacation homes and barely try new restaurants because we are stuck in our ways. Charlotte, NC is still charming and we really haven’t lived anywhere else so comparisons are pointless. We never feel rested and love our children dispute the splitting headaches they have gifted us over the past seven years.

Our oldest daughter is in the first grade and an average reader at best. She does like to pretend to know more than she does. We were going to force her to read Little Women this summer, but we didn’t even buy the book. We did browse The American Girl Doll magazine religiously. As the oldest, she believes she is the charge of everything and it isn’t annoying at all.

The twins are always fighting. They love to hate each other. They can be in the playroom for minutes without arguing. Their bond is intense. We were going to plant a time capsule to capture their twin connection but we couldn’t get them to agree on what to put in it. Plus, we don’t own a shovel to bury the time capsule in. We do hang their artwork on the fridge (sometimes).

Krista is a fabulous wife making dinner at least every other week. Sometimes they are even healthy! Speaking of healthy, Krista is on a total “health kick” eating only Vegan foods for hours at a time (mostly the hours between dinner and breakfast). We are so proud of her. We don’t know how she manages all her volunteer commitments but we do see her stressed out most of the time (always). She sure looks good in pajama pants and workout clothes.

Tom is doing well at work and still hates working 78 hours a week. He rarely complains about his travel schedule and will be up for a promotion in ten years or more. He loves getting up with the twins early on Saturday mornings. We all believe the bad reputation investment bankers have received in the press is lovely and accurate. He thinks the Gators are having a triumphant year and holds no bitterness towards the program.

Our house hasn’t changed a bit and we still fight over the air conditioner in the summer and the heater in the winter. Tom loves how much time Krista spends on Facebook and feels it is a wonderful use of her spare time. Krista thinks the way Tom screams at the TV during football season is charming.

We go to Target a lot.

We carve pumpkins at Halloween, eat Turkey on Thanksgiving, and decorate eggs at Easter.

The kids are great (while they are sleeping). We are working on teaching them Chinese, French, and English. So far we have only been slightly successful on the English.

We hope your Holiday Season is as insane as ours and that you spend time with those you love (verses those you are forced to see). May your 2014 be as mundane as ours!

Looking for something to do to entertain your...

Smarty Giveaway: My Secret Angel and Me –...

From the Charlotte Mecklenburg Library: Summer Reading—Avoiding the...

Forgot to include the link to Paul’s blog. Ya’ll this is some hilarious and WITTY stuff. You think your life is stressful? Please! Amazing!

Krista – This is fabulous – I am crying from laughing so hard. Thank you for a MUCH needed pick me up today!

You light up my life. Dying of hilarity over here. Gifting me with this funniness made my season merry…

where have you been hiding. if i don’t see you soon i’ll die.