Home Parenting That Was Fun, But Now It’s Done
ParentingThings To Do

That Was Fun, But Now It’s Done

Fall sports are finally over for my kids.  It was quite an undertaking.  I am eternally grateful for all the rides my kids have gotten from friends that make all this possible.  We had a great time, but now it’s time to relax and regroup a bit before the spring. 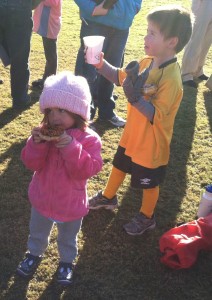 We had three of four kids playing on soccer teams (U6 and U8 at the Harris Y and U10club soccer).  We had soccer practices three nights a week (Monday, Wednesday and Friday) with overlapping practices at two different locations each Wednesday and at least three games every Saturday.  I wish I could have known in advance when all the practices were going to be so I could better plan what teams to sign up for, but that didn’t happen this time around.  Fortunately, I had a kind neighbor that helped me out every Wednesday and it all worked out.

The good news was we spent a lot of time at playgrounds during practices and the kids slept very well every night from all the activity.  On the other hand their dinners were pretty Spartan and we usually didn’t sit down to eat until around 7:00pm (versus 5:30pm), which made it quite the challenge to start the bedtime ritual at the usual 7:30pm.  My wife often worked late, so I was doing dinner and bedtime for four kids by myself most of the time.  It made for a long day.

At times it got just plain absurd, like the weekend my wife was out of town at a work retreat and I was flying solo for the weekend.  All three soccer games were scheduled for Saturday morning and the club soccer game was 45 minutes away.  So I packed up all the kids in the minivan at 6:45am (on a Saturday!) in order to drop off my nine-year-old daughter at a teammate’s house by 7:00am, so she could get a ride to her game.  I grabbed pancakes for the other three kids at the McDonald’s drive thru on the way home so they would have time to eat and get ready for their games.  My nine-year-old hitched a ride back with a different teammate after her game and met up with us at my five-year-old son’s game.

Also that Saturday, I had a “proud parenting” moment when I realized my three youngest kids had consumed at least 1000 calories each before lunch (pancakes for breakfast, doughnut-Capri-Sun combo after my seven-year-old daughter’s game followed by a Famous Amos Cookies bag-juice box combo after my son’s game).  My kids definitely came out on the wrong side of that energy balance equation that Saturday.  In the past, I tried to enforce an “if you don’t play, you don’t get a snack” policy with the kids, but part way through this season, I had to admit defeat and let them have snacks after EVERY game.

Winter basketball season will be much better.  We only have one practice during the week on Thursday from 7-8 and my daughter has a ride both ways.  We have two games on Saturdays and one clinic on Sunday, so we suddenly have a lot of unstructured time on our hands that I look forward to filling up.  Neighborhood kickball anyone?

I love team sports and the benefits of them, but wonder if all the hassle is worth it for the family as a whole.  I think about this because I still have one more kid that will start playing sports in a few years and then it’ll really be tough.

What do you think Smarty parents?  Where do you come out on the family time versus sports time balance? 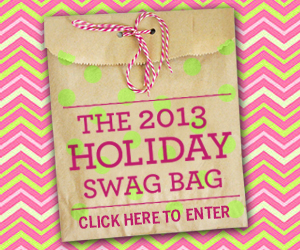 When you become a mom, you quickly realize that after your first holiday season, it’s never going to be about you ever again. And that’s ok, because we adore our kids and the true meaning of the holidays. But what Smarty girl doesn’t like gifts wrapped up in a pink & green bow just for her?! That’s where CSP comes in. Smarties, we have scoured our amazing city and we bring you the BIGGEST and MOST FABULOUS Smarty Swag Bag to date! Feast your eyes, Smarty Charlotte and enjoy the pampering!

We present over $2,700 worth of fabulous Smarty Swag…Click here to join the holiday party, we’ll pick our winners on December 9th, all 22 of them!!

So true! Glad to have you on board.