I just finished the book What Alice Forgot by Liane Moriarty – have you read it? Loved it – definitely recommend it for a book club or just an easy read. If you’ve got school-age kids and have been married for 10+ years, you just might identify with the main character, Alice. 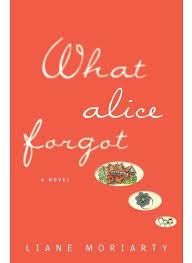 Quick synopsis: Alice, 39, falls in a spin class and bumps her head causing her to forget the last ten years. She wakes up and thinks she’s 29 and pregnant with her first child when she’s actually about to be 40, has three kids, and is getting a divorce. The book takes you through her astonishment at what her life is like at 39 – her shock at realizing she has three children and all the stress that comes with managing their lives, the change in her friendships, the evolution in her relationship with her husband, PLUS the changes in society over a decade (she thought it was 1998 so 9/11 was a complete shock).

I was pregnant with my first ten years ago, I’ve been married for twelve, and – like most people – I could never have guessed what life would look like now. It got me thinking: What 10 things would shock my mid-twenties self about this girl’s thirty-something life?

1. Four kids. Never would’ve seen that coming – and three of them BOYS. My girlie self would be shell-shocked at the swords, dirty knees, and pee around (not actually in) the toilet.

2. My kids watch TV and eat junk food. My newly pregnant self would recoil in horror.

3. Noise. My life today is so NOISY. I wouldn’t be able to hang for one afternoon. No way.

4. Lululemon. I have paid (on more than one occasion) $98 for a pair of workout pants. Although they are worth every penny, no way would I have believed that in 2003 – I was strictly a cotton t-shirt and gym shorts runner.

5. Texting. OMG ROTFL would be like Swahili to me. Now texting is my preferred method of communication (no voicemails, please).

6. Facebook. Confession: I worked for a tech company pre-kids that burst in the tech bubble. I remember my boss saying another company was working on a program that would allow people to share their vacation photos online with others. I literally could not grasp why people would want to look at others’ vacation photos – all I could think about were the slides my dad would make us look at from his time in the Philippines during the war. Um, Hello, Facebook! Yea, I’m not always the most forward-thinking girl. I also know I would be WAY overwhelmed by that News Feed.

7. Justin Timberlake. He’s still around and – dare I say – better than ever. He was just getting warmed up with “Cry Me and River” in 2003. Who knew?

8. Minivans. In 2003 I would’ve laughed in your face if you told me I would be on my second minivan – and that I’d actually fill that thing UP with kids.

9. Sleep. Or lack thereof. There is NO WAY I would believe that I could exist on the constantly interrupted sleep a mother gets.

10. Friends. I would have no idea who 90% of them are. I’ve met so many wonderful people since becoming a mother. Luckily, I still have some of the friends I did 10 years ago, but I would never believe so many amazing people could come into my life in one decade.

That’s my list – what’s on yours? Were you just getting your license 10 years ago? Maybe you were in college? What would you be TOTALLY wigged out about if you woke up thinking it was 2003?

Smarty Giveaway: A Family 4-Pack to Scarowinds OR The Great Pumpkin Fest, a $200 Value!

Fitness Friday: How to get the best results...

5 Reasons We Did Swim Team