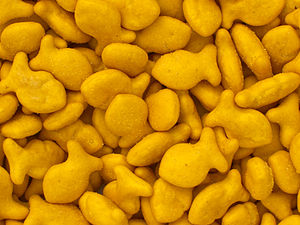 Fish are friends. NOT food. I can’t help but hear the famous Finding Nemo line in my head as I watch the bag of cheddary, salty, tasty-goodness go from kid to kid at the playground. They are EVERYWHERE. Goldfish is to toddlers as coffee is to adults. It’s as if their little worlds would combust without them. I am coming out of the closet, I loath this childhood addiction. (GASP)

Time magazine recently named the top 9 worst foods to feed your children. Number 2 on the list…Goldfish. Right after TV dinners and before Fruit By the Foot. The more research I’ve done the more I am convinced that the delicious cheddar fish (let’s be honest, those things are goooood) are awful for you nutritionally. Goldfish are high in sodium and filled with some pretty serious food chemicals. My waistline definitely doesn’t like this snack but, more importantly, neither does my child’s long-term health or eating habits.

But how can I avoid it? At just 18-months I watch as my child eyes her friend’s bag of Goldfish and will use every adorable ploy she can to get her hands on those pesky little fish. Seriously, it has become a joke among my friends and it’s quite hilarious to watch Annie rummage through just about anything to find the bite size snack. The more fish she eats the less veggies and fruits she eats later. Suddenly I feel like I am on a hamster wheel running around in circles as I try to break the pattern.

As a naïve first-time parent, I am at a loss. I really don’t want Goldfish to take over our house as a common, every day snack. But it seems the more I steer clear from them, the more I find her shoveling them in at the playground. Is this already happening? I have visions of my house full of apples and carrots, but will I find my daughter in her friend’s pantry downing the “good stuff?”

Someone must have an answer for me. What is the proper balance between restricting treats and giving in just the right amount?

Better yet, could we all just ease up on the Goldfish consumption? I mean really, ladies – help a sister out here. Need we all forget, Fish are friends – NOT food.

Totally agree with you! We had the same problem, but with pretzels. Replaced it with popcorn!

We just started popcorn! I think it is going to be a hit! Do you do the microwave kind? What are your recommendations?

We just bought the Presto PopLite air popper and it is awesome! No oil, pops almost 100% of kernels in just a few minutes and almost zero clean up. I could not believe it when 1/2 cup of kernels made two big bowls worth! You can top it any way you want. I am liking it.

My kids usually snack on either sliced apples, grapes or strawberries and some nuts and cheese. If they need a cracker fix they have the Late July organic cheddar crackers (the closest thing to goldfish w/o the food dye and junk).

I think a peach, plum or apple is a great portable snack and way healthier. My 8 year old brings fresh fruit in for her snack at school and she loves it.

We snack on dried fruit (without sodium dioxide) , nuts, fresh popped popcorn. Come on y’all, it takes 2 whole minutes to pop on the stove in coconut oil or your oil of choice. Never feed them chemical laden microwave popcorn. I’m wary of anything that requires me high heat and plastic as well, but i really dont know how the airpopper works.
Fresh fruit, homemade frozen yogurt pops and apples, apples, apples.

One thing to note about popcorn is to make sure you are buying non-GMO kernels. Organic popcorn kernels are not enough, it needs to say non-GMO as well.