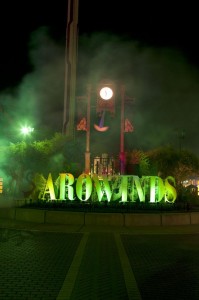 DARKNESS FALLS. EVIL RISES. Every weekend night, Carowinds transforms into a horror-filled nightmare. From mazes with terrifying creatures around every corner to thrill rides that’ll haunt your dreams, it’s everything you fear and can’t wait to experience. Smarties, meet Scarowinds Halloween Haunt.

So what age do you take your kids to Scarowinds? That’s the big question starting in fourth grade. Their official statement is 13. I concur. My daughter didn’t ask to go to Scarowinds until 6th grade, she was 11 but many of her friends 12. Supposedly EVERYONE was going, so it was something she begged me to do. I know her fear level and I thought 6th grade was a risk, but it couldn’t be that bad, right? She invited her 4 besties and off we went. 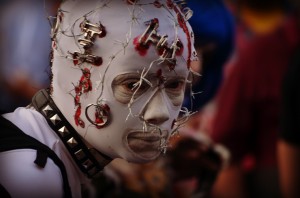 What I didn’t take into consideration was the friends’ fear levels. Two girls were still afraid of roller coasters. Umm, that was a problem. The other two were scared of their own shadows. Another big problem. We arrived after dark (so much scarier than arriving at dusk when you can see the scary people in the day light) and the girls barely made it to the Intimidator without crying! As a rookie Scarowinds mom, I didn’t pay much attention to the scare zones, the mazes, etc. We just kind of rolled with it. Which made it all the more terrifying and entertaining. We also went the weekend before Halloween last year, so the Scarowinds actors were bringing their A-game scare factor.

As we ran past the Intimidator, we found ourselves in the “Playground” Scare Zone. Let me tell ya, those scary people did not disappoint. This is TRUE talent, they are AMAZING! Our crew feared for their lives and I didn’t even see which direction they ran. Eventually I found them in the closest cafeteria, apparently this is an official safe zone, as are the rides. Most of the “scaracters” have zones that they stick to and they don’t often ride the rides. Although I have seen them on the Intimidator on occasion. 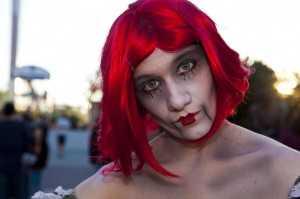 One hour into our visit, three of the four girls declared that they were not going to leave the restaurant and I needed to call their moms. That was another big problem since we had to go back the exact same way we came in to get to the entrance. That took another 45 minutes of serious life-coaching. Finally the girls caved and realized it was the lesser of two evils. We made it through by hopping on one ride after the next just to get closer to the entrance. Remember when I told you that half of our crew was terrified of roller coasters? Well they chose the scariest of coasters including the Intimidator and Night Hawk over walking through those scare zones. That should give you a good reference.

My absolute favorite scare talent was this guy who walked around in a black cloak and had inline wheels on his wrists and knees. So he would be walking near you or past you and you wouldn’t think much. Then all of a sudden he would be whizzing by you and weaving in front and behind you with the scariest noise you’ve ever heard. He got me every single time. I’m pretty sure he enjoyed scaring the moms just as much as the kids! 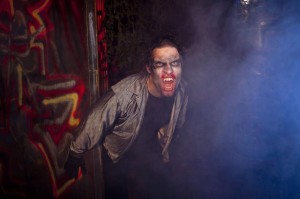 So this year we went with basically the same dream team, one year older and slightly braver. They were all jacked up and talking like they weren’t scared this time. Well it was lather, rinse and repeat. Same stall tactics and eventually we split up so the ones who were a little braver could do what they wanted to do. But it was no less scary – we still haven’t made it into the mazes or haunted house. I’m hoping to conquer that before Halloween. I’ll give you the low-down on that at a later date.

So here are my top 5 Smarty tips when considering Scarowinds for the first time: 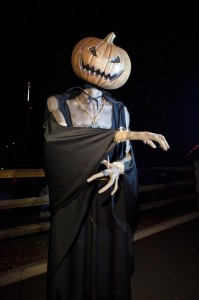 1) Pick friends who are not afraid. I know, they all say they aren’t scared. I’m here to tell you they will be – boys and girls alike. Make sure this ain’t their first rodeo at Carowinds either. Nothing worse than a child who’s scared of the dark AND roller coasters. This is not the place for them. Remember, PG-13, 6th graders and up.

2) Go with a fun mom gal pal. I promise you, this will be one of your funniest tween mom moments. I laughed so hard I almost cried my first time. It was great to share with a fellow girlfriend, who obviously has a good sense of humor. No mother hens allowed.

3) Don’t drop them off without an adult. Only the “fast” kids get to do this right out of the gate. That’s a topic for another day. Trust me, they will want you nearby, even if they don’t tell you that.

4) Leave 30 minutes before closing. Traffic is slow getting out of there and you’ll be ready to end the night.

5) Lastly, don’t wear white, only dark clothes. White is like having a target on them, ripe for the vampire picking.

5b) There is a BAR! I couldn’t believe it! So if you have really brave kids, you and your gal pal can sit back and enjoy the hilarious entertainment. Scaracters stalk the bar.

Back to Scarowinds…I think for the full effect you should definitely arrive after dark. It will maximize your scare factor. I’m including Scarowinds’ video below to give you some good footage. Let us know if you have any other tips. Also, tune in on Monday as we’ll have a special super Smarty Scarowinds Giveaway – Boo y’all!

FELLOW MOM QUESTIONS – Need your parenting advice to see where Smarty Charlotte stands. What age do you think is appropriate to drop your kids off at Scarowinds? And for those who have, how did you navigate that pick-up carpool line at midnight? It looked like the true nightmare for parents:-) Comment below!

Smarty Tips for Getting Organized after the Holidays

This was very helpful!! thank you!

This was very helpful. 🙂