From the Smarty Health Corner and Novant Health: From ‘doomed’ to ‘delighted,’ a patient embraces gastric bypass surgery

After five difficult years of dealing with problems from marital issues to parental caretaking, Kimberly Shea realized her health had taken a decidedly downward turn.

“I had always been very active and didn’t feel like my eating habits were horrible, but I found myself gaining a tremendous amount of weight,” said Shea, a Charlotte-based assistant vice president and regulatory relations specialist for Bank of America. “Worse, I was suddenly waking up two or three nights a week with extreme acid reflux.”

When her painful reflux condition, first attributed to stress, did not respond to prescription medications, her primary care physician ordered tests that revealed Shea was suffering from gastroparesis — a partial paralysis of the stomach that slows or halts the movement of food to the small intestine. 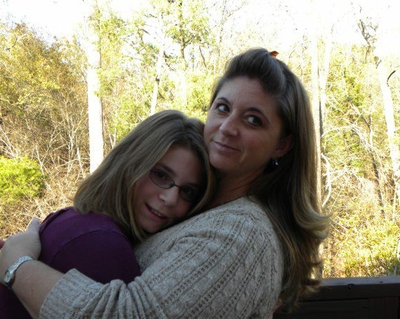 Shea (right) then, with her daughter Lauren

Meanwhile, as she approached her highest weight of 229 pounds, she also developed high blood pressure, elevated cholesterol and prediabetes. Left untreated, these chronic conditions can lead to serious, even deadly, health problems like stroke and Type-2 diabetes.

“All of this came on during a very short time, and I found myself needing many medications that I did not want to be on,” said the 50-year-old mother of two. “Plus, with a history of obesity in my family on my mom’s side, I just felt like I was doomed.”

That’s when Shea started learning about the potential benefits of gastric bypass surgery, which can extend far beyond weight loss. It’s important to note, however, that bariatric surgery is only part of the strategy, which requires patients to embrace significant changes in lifestyle.

What is gastric bypass surgery?

Through online research and conversations with her primary care physician, Shea discovered that gastric bypass surgery can relieve symptoms of gastroparesis. The procedure is also known as Roux-en-Y gastric bypass, involves sealing off a small portion of the upper stomach and connecting it directly to the small intestine about one quarter of the way below its beginning.

The result: Patients feel full sooner, eat less and absorb fewer calories, because the food they consume bypasses most of the stomach and the upper portion of the small intestine.

“Altering the pathway that food takes through the gastrointestinal tract also leads to changes in our metabolism and how our body handles or absorbs nutrients,” said Dr. Thomas Walsh, surgeon at Novant Health Bariatric Solutions – Kernersville.

After meeting with Walsh, Shea launched into what she calls her “due diligence.” By committing to an exercise and nutrition program, she was able to lose about 20 pounds on her own before the procedure.

“They really want to see if you can lose some of the weight yourself, to show that you have some initiative and are willing to make an effort,” she said. “Having that forward momentum and ability to make healthier choices helps you lose weight after the surgery, because it’s still going to take effort.”

These lifestyle changes and behavior modifications are elements of the “bariatric surgical pathway.” Without a strong commitment to making these necessary changes, patients may regain the weight they lose after surgery.

So, to ensure they have the knowledge they need to succeed, every patient must complete the following before being cleared for surgery:

“After all the hard work leading up to it, the surgery itself was simple and painless,” Shea said. “During my recovery, I never needed anything stronger than over-the-counter ibuprofen for pain. And, within six or seven hours of my surgery, I was up and walking in the hospital.”

Shea’s weight loss was consistent — slower at first, then speeding up after the first six months — and she eventually reached her current weight of 113 pounds.

“The amount of weight lost after gastric bypass surgery varies from patient to patient,” Walsh said. “It depends on commitment to lifestyle changes as well as having a strong support network, health conditions and other circumstances.”

And as Shea lost the weight, she also noticed other benefits that were even more important: Her high cholesterol and blood pressure returned to normal levels, and she was ultimately able to stop or reduce her medications.

“Best of all, I never again had the gastric reflux — not even once — after the surgery,” she said. “In terms of that and reversing my prediabetes, it offered instant gratification.”

“Kim’s is a great story, one that’s not just about looking well, but feeling well,” Walsh said. “She’s now living a life free of the constraints faced by people with diabetes, high blood pressure, high cholesterol and sleep apnea.”

Shea’s results, dramatic as they are, are not unusual, according to Walsh.

“Just because you’re overweight, diabetic, have high cholesterol and so on — that doesn’t mean your situation is hopeless,” he said. “The future can be much more hopeful and brighter for folks than they’re usually led to believe.”

It’s important to note that bariatric surgery patients who see the biggest changes are absolutely committed to improving their day-to-day lifestyle and embracing healthy habits.

“We ask people to make significant changes in how they eat, how they think or behave and how much daily exercise and resistance training they get,” he said. “The question is, why wouldn’t you do those things, if you truly want to be healthier, live longer and have a better quality of life?”

Walsh explained that the majority of patients who undergo gastric bypass surgery experience vast improvement in other health conditions during the first year after surgery. For example:

– 63% are able to stop taking medication for hyperlipidemia (elevated levels of lipids, or fats — such as cholesterol and triglycerides — in the blood).

“Because of these improvements to their overall health, these patients are also 90% less likely to have a heart attack or stroke,” he said. “Plus, their chances of being diagnosed with colon or breast cancer are dramatically reduced.”

Perhaps most strikingly, Walsh has documented a 90% cure rate for Type-2 diabetes among patients who undergo gastric bypass surgery.

“Imagine — with the proper program, in the proper hands, you can be cured,” he said. “For many folks, that’s a real game changer.”

A lifestyle she loves 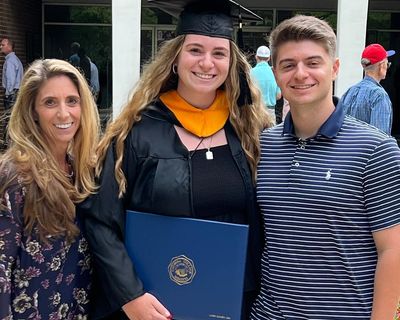 Shea (left) now, with her daughter Lauren and son Corey

Shea, now “happily divorced,” has maintained a weight loss of 116 pounds for more than seven years — a major accomplishment that has boosted her confidence and brightened her outlook on life. Her kids, now 21 and 23, are also delighted with the transformation.

“They love how active I am, and that I can do so much more with them — all the sports-related things I enjoy,” she said. “Now, I can go hiking at Crowder’s Mountain and climb to the top every time. It’s a great feeling.”

Being active again is extremely important to Shea, who always loved going to the gym, but felt limited by the extra pounds she was carrying. These days, instead of feeling stressed about burning calories, she enjoys working out just to stay healthy and maintain her new lifestyle.

“Deciding to have gastric bypass surgery was one of the best things to happen in my life,” she said. “It’s not a magic bullet — you still have to eat right and exercise. But, if you’re willing to commit to doing that, this surgery can be truly life changing and transformational.”

From the Smarty Health Corner: Nutrition, when Is more better?

Pelvic Pain Heaven – There Is Such A...

Get your family outside and be active together...