From the Smarty Health Corner and Novant Health: Veterans continue duty in hospital visits to other vets

George Burns was struggling with cancer the day the door to his hospital room opened at Novant Health Forsyth Medical Center in Winston-Salem and in marched the Marine in his uniform dress blues. Technically, Bob Fulmer, 84, is long retired, but as he likes to say, “Once a Marine, always a Marine.” 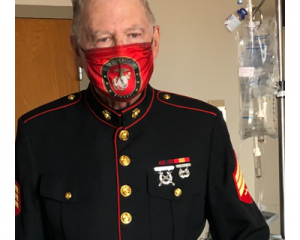 Bob Fulmer in his dress blues.

“Oh my gosh, Sergeant!” Burns exclaimed. “What are you doing here?”

Fulmer, a staff sergeant way back when, knew exactly what his mission was on this day, Nov. 11, 2021, Veterans Day.

Two old soldiers sharing memories. Talk about your healing moment. It’s a story worth telling on Memorial Day when the nation pauses to honor those who served and died.

The visit was made possible by Veterans’ Rounding (rounding as in making rounds), a small but mighty part of the volunteer program at Novant Health Forsyth Medical Center. Veterans visit brothers and sisters in arms who have landed in the hospital. They come bearing gifts – stickers thanking them for their service, handmade quilts and get well cards signed by veterans. But mostly they come to reminisce. Twenty or so minutes reliving past glories, recalling sacrifices, rekindling the pride that lives forever in a soldier’s heart? You’d be amazed at how quickly it can take a patient’s mind off present-day troubles.

“The veterans leave them laughing,” she said. “But there are a lot of tears shed in those rooms, too.”

As Veterans’ Rounding gathers momentum after COVID-19 halted the visits for a time, Steve Davis and Bob Fulmer form a powerful one-two punch.

Davis, 77, of Welcome, North Carolina, served in the U.S. Army, including a year in Vietnam. Forming an instant bond with fellow veterans he’s never laid eyes on before comes naturally. “I run my mouth all the time anyway,” he said. “I don’t have problems talking to anybody. I’ve never seen a single veteran in the hospital who doesn’t perk up.”

Alas, Davis must make the round in civilian dress.

“I have a uniform somewhere in the house,” he said, “but I guarantee I can’t get in it.”

Fulmer, 84, of Winston-Salem, can still squeeze into his dress blues. He served in the U.S. Marines and saw combat in Korea. His military service means everything to Fulmer. He planned to spend Memorial Day at American Legion Auxiliary Unit 55 in Winston-Salem. Fulmer’s uncle, Clifford Fulmer, was a Marine corporal who died in World War I when he was cut down by enemy machine-gun fire in France. That was 104 years ago. Fulmer, of course, never met his uncle Clifford. Didn’t matter. When he and his late wife, Darlene welcomed a son into the world, they named him Robert Clifford Fulmer. 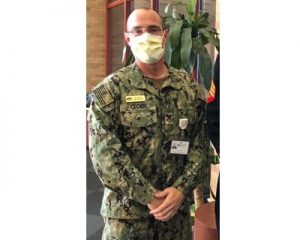 Burns grew up in Winston-Salem and served in the U.S. Army during the Vietnam War. He was stationed in Korea. Like so many veterans from that era, when uttering the word “Vietnam” triggered national dissension, he didn’t make a fuss over his service. Plus, Harrison says, “You know men. They don’t talk about their feelings.”

Stricken with a debilitating form of blood cancer, Burns had been a patient several times at Novant Health Forsyth Medical Center. Harrison was there the day Fulmer and Cloer came to see her dad.

“They looked so sharp in their uniforms,” she says. “It was a very impressive sight. It was uplifting at a time when we were struggling.”

Harrison remembers showing the visitors a photo of her dad in his uniform. She keeps it on her cellphone. She doesn’t recall exactly what her dad, Fulmer and Cloer talked about. It’s been a while, and a lot has happened since then. “I just remember it being a bright spot in his day and a bright spot for me,” she says.

It is left to Harrison and her sister, Angela Burns, to speak for their father, and for other sons and daughters to speak for the old soldiers in their lives. Isn’t that what Memorial Day is for?

Some 200 adult volunteers assist patients, families and staff at Novant Health Forsyth Medical Center in Winston-Salem. Another 95 youth ages 15-18 serve as junior volunteers alongside mentors. There are also five therapy dogs. From playing the dulcimer in the lobby to escorting visitors to their destination, volunteers help take the angst out of coming to the hospital, “That’s the heartbeat of Novant Health,” volunteer services manager Evie Kendall says. After COVID-19 eliminated most volunteer services for a time, the ranks had dwindled when services returned. Those numbers are slowly building back up. People 18 and over who want to volunteer at Novant Health Forsyth Medical Center can reach Kendall at 336-718-5738 or 336-718-5745. Visit NovantHealth.org/volunteer to learn about volunteer opportunities throughout Novant Health.