From the Smarty Health Corner and Novant Health: How doctor’s own high-risk pregnancy changed her career

Novant’s expert neurologists are here to help. Find one here.

Hospital doctors are accustomed to running the show as they course the hallways, attend to patients and give orders. And Dr. Megan Donnelly, a resident at a prestigious medical center back in 2014, was no exception.

So she was not prepared for news that meant she would suddenly see life from the other side of the bed. Expecting her first baby, Donnelly was devastated to learn she would need to stop working immediately and be hospitalized on bed rest for weeks to save her pregnancy. “I was used to being a caregiver, and the idea of becoming the patient was horrific to me, in all honesty,” she said. “There’s a massive loss of control when you’re a patient to a degree that I was unaware of until I became one.”

But an experience that could have been traumatic and nothing more ended with two joys: Donnelly’s healthy son, now 6, and a meaningful new direction that she had never envisioned for her career.

Today, she’s a women’s neurologist at Novant Health Neurology & Headache – SouthPark in Charlotte. Donnelly is passionate about treating women in high-risk pregnancies who also have neurological complications, such as headaches or cerebral sinus venous thrombosis, a type of blood clot in the brain.

Donnelly was a high-powered neurology resident at the Cleveland Clinic in Ohio when she became pregnant. While the pregnancy started off fine, she went into pre-term labor at 24 weeks because of a previously undiagnosed uterine abnormality. Her doctor said she needed to start bed rest right away.

Donnelly had always viewed herself as a strong, resilient person, but the news shocked her, partly because she understood better than most the implications of very early delivery. “As a neurologist, I was acutely aware of what risks there are at each gestational age if he came early,” she remembered. “That was very, very stressful.”

Other aspects of her days in bed made her distraught, too. Being hospitalized on the high-risk obstetrics ward meant needing to push a call button to ask for a drink of water or even to use the bathroom. The lack of agency in her own life was “a massive adjustment.”

Donnelly became depressed. “I frankly didn’t handle bed rest as well as I thought I would,” she acknowledged. In fact, this is the first time she’s publicly shared her story. “It’s hard to be in such a raw and vulnerable place to talk about this,” Donnelly said, “but I think it can help others.”

She briefly took antidepressant medication after discussing the risks and benefits with her physician. Conversations with the hospital social worker also lifted her mood.

Donnelly ultimately got through the experience with help from caring nurses, colleagues who popped by for lunch and her husband, who visited every evening after work. She read everything she could find in medical journals on her condition, empowering herself with knowledge on evidence-based practices to manage high-risk pregnancy. Netflix binges didn’t hurt, either.

Doctors hoped Donnelly would be on bed rest for 13 weeks. But after seven weeks, her son was born early, just short of 32 weeks gestation. He spent about a month in the neonatal intensive care unit. Though he experienced some mild developmental setbacks initially, he’s doing great now, Donnelly said.

The experience transformed what Donnelly wanted for her career. Prior to her pregnancy, she considered herself a general neurologist with a focus on headaches. She didn’t want to change her professional path completely, but she believed she could combine her neurological expertise with her newfound love and passion for taking care of women, including those facing high-risk pregnancy.

Obstetric neurology, as it’s called, is a rare niche in medicine. Donnelly estimates there may only be 15 or so nationwide practicing in the specialty. And there are only a couple of medical fellowships in the field, including one at the University of Pittsburgh. Donnelly reached out to the fellowship director in Pittsburgh and poured out her story. She landed a mini-fellowship, where she received deep training and experience working with a senior obstetric neurologist.

After her fellowship, Donnelly served as the Cleveland Clinic’s obstetric neurologist, taking care of high-risk pregnancy patients with neurological concerns. Novant Health recruited her to lead its women’s neurology program in 2018, serving pregnant women among other patients. 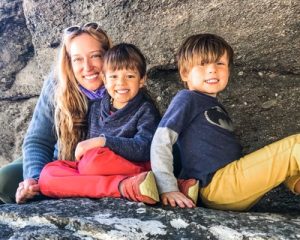 For women dealing with bed rest and other health issues, Donnelly offers an important lesson she learned from that time. “Taking some ownership in your health and wanting to be an active partner in your treatment team is so incredibly important,” she said. “Nobody will ever be the best advocate as you are for yourself. I stress the importance of that with my patients and tell them they’re part of the treatment plan. I think it does change the outcome.”

Another happy lesson: Inpatient hospitalization with bed rest for one pregnancy doesn’t mean the next will be exactly the same. For her second son, Donnelly was on modified bed rest throughout the pregnancy, which meant she was permitted to work and come home, with no exercise. She also was prescribed a progesterone hormone treatment to help prevent pre-term labor.

Her second son was born healthy and well at 36 weeks. He’s 5 years old now. The boys are relishing summer time outside after so many hours indoors last year, as well as clobbering each other on occasion.

From our Smarty friends at CEENTA: Earbuds on...

Smarty Reminder: Get your Smarty Discount on BTS...