Home About us Smarty Sweetheart Story
About us

Love stories. They come in all shapes and sizes. Smarties, we are opening the vault and sharing ours with you. Happy Valentine’s Day! XXOO ~ Team Smarty

My love story began in 11th grade. Yep, we were high school sweethearts. Randy and I were at a summer pool party and we didn’t really know each other. Unbeknownst to me, Randy noticed that I was the only girl at the party wearing a bikini, which clearly caught his eye:-) He swam up to me and we hung out for hours. We started dating soon after and did the high school sweetheart thing for a while. But once we both hit college, he in Michigan and me in Florida, we quickly realized that we needed to spread our wings and enjoy the college experience with no long-distance strings attached. We did have each other on drunk dial so we kept in touch periodically throughout college. We didn’t really get serious until a few years after college and we started the long-distance dating gig. This was pre-cell phones, pre-social media and pre-FACE TIME!! I feel like a dinosaur just typing this. One day, Randy sent me a package to my work, which I hated (my average college grades landed me as a Store Manager at Toys R Us as my first job out of college – I haven’t stepped foot in that store since becoming a mom:-). The package included a 4-month AAA Trip Tix map that had us starting at his house in Michigan and took us through our favorite national parks across the country, up to Alaska, down the California coast and into New Mexico and ending in a scuba trip in the Caribbean. I was in shock and the first thing I said was “you know I will run out of money in one month?” His response: “I’ve been looking for someone just like you to go on this trip.” He had me at “hello, let’s quit our jobs and travel.” We were so ahead of our time…#weinventedthegapyear 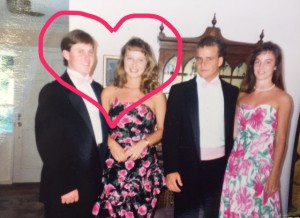 We met the way all great love meets – before a frat party freshmen year at UNC – Chapel Hill. I happened to be dating one of his frat bros and was going to the party with said-bro, but due to a series of (very fortunate) events that involved an ice storm, my roommate’s tailbone, and a trip to Student Health, I got delayed and my date ended up being too inebriated to pick me up (so classy!). So, a cute pledge brother with DD duties that night ended up swinging by my dorm to take me to the party. That same cute pledge just happened to be in my geography class the next morning, and, lucky for me, he was reeeaaaalllly good at geography. He loved my overalls, and I loved his eyelashes. Match made in {the Southern part of blue} heaven.

I love that we met in college pre-cell phone, pre-text and pre-social media. I love that we “grew up” together and are figuring out this adult thing together. And, I really love that there’s never a question in the house about who we’re rooting for come March Madness. Makes life so much simpler. 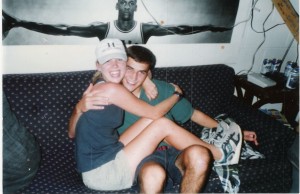 This is one of my fave early pics of us because not only does show where we came from, but it SCREAMS Gen X (best generation eva!). Gap khaki shorts, a worn-in hat, Air Jordan taped to cinder block walls, empty Busch cans, and an answering machine. All surrounding a nasty college couch. Pretty sure DMB, Hootie, or Counting Crows is playing in the background. Simply perfection.

Chris and I grew up less than a mile apart. We knew each other. Our families were friends. We were just at two different places in our lives growing up. Flash forward ten years and the timing was just right. I was living on Sullivan’s Island, SC at that time. My life was perfect. I was dating, working at an art gallery, and living on the beach. I decided to go home (VB, FL) for a weekend to visit my parents and that is when it happened. I broke all my rules. Never date a guy from my home town. This was not supposed to happen. He was not part of my plan.

Okay, I am ahead of myself.

During my visit, I decided to join some friends at the local watering hole and there he was…. His smile caught my attention RIGHT away (still to this day, when he smiles at me from across the room I melt). Apparently, I caught his attention, too (it was like love at first sight – not really, because we already knew each other). He came over to me and we closed the bar talking. At that point, he had asked for my phone number. I don’t exactly remember why, but, I told him that my parent’s phone number was listed (pre-CELL phone days). Little did I know, my parents had unlisted their phone number. Unaware of his dilemma, I assumed he just wasn’t going to call. I was disappointed; however, I was just visiting for the weekend. He got crafty and made some calls (I think he ended up calling my Uncle) It was almost time for me to head back and that is when he called (lucky him, because I was ready to hit the road). From that point on we were inseparable. My little perfect life in SC was blown up. I extended my trip to FL indefinitely….20 years later, here we are. 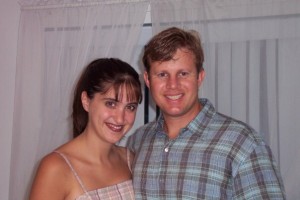 I was an RA (resident assistant) my senior year of college at Ball State University (Go Cards!) My hall was a co-ed/upperclassman floor and Derek lived on my floor. The first day I met him I thought he was going to be the one giving me the most trouble, as he stood in the lounge doorway, with crossed arms, one foot out the door – during my first-floor meeting. We eventually became friends – so much so that he called poison control on me when I drank too much cough syrup with codeine – but that’s a story for another time! After Halloween that year we started dating and kept dating as I graduated the following summer and got my first job, while he finished his Landscape Architecture degree. He got offered a job in the very southern city of Charlotte and I really saw our relationship going somewhere so I said “why not?” and moved with him. Four years later he asked me to marry him and the rest is history! 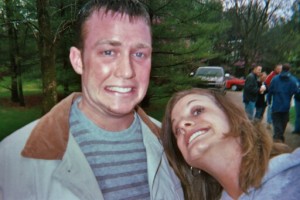 It was the summer of 1997. I was working for an advertising agency in Greenville, SC.

One lazy summer afternoon, my phone rang. It was one of my buddies who worked on the first floor in the creative department. He said, “Stop what you’re doing and get down here. You’ve GOT to see the girl that’s interviewing for graphic designer position.” In the background another friend yelled out, “You better hurry!” I slammed down the phone and bounded down three flights of stairs.

I hit the bottom floor, rounded the corner into the creative wing, and there she was…Rachel Rosemary King.
You know that scene in Weird Science where the nerds make their dream girl? They plug in their machine, there’s a big bang, and out of the smoke Kelly LeBrock emerges in slow motion. The first time I meet Rachel was kinda like that. (Minus the smoke.) To this day, I swear Rachel was wearing a crop top on her job interview. Rachel says I’m lying, but that’s how I remember it. I’m sticking to it.

Our first encounter wasn’t much. We passed each other in the hall, I slowed down to say hello, and that was it. It wasn’t much, but it was enough for me.

I rounded the corner into the office of my friend who originally called. A few other guys were sitting around talking about the new agency recruit. When I stepped into the office everyone stopped talking, curious about my thoughts. I simply stated, “I’ll get her.” Everyone busted out laughing. As they should have. “I’ll get her.” Such a ridiculous statement. But in the end, I had the last laugh.

Rachel and I will be celebrating our 17th anniversary this April. She’s still smoking…and I’m still a nerd. 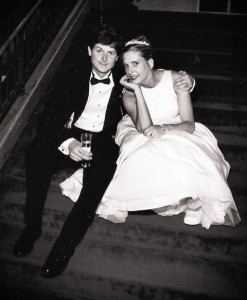 Something I’m currently obsessed with… the Organizing Pro!