Meet Parker, a funny, resilient 8-year-old battling cancer, and find out why our Smarty Friends at Levine Children’s Hospital are the ‘Best.’ 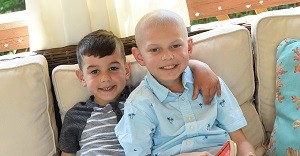 On the outside, eight-year-old Parker’s infectious smile, natural charisma and sense of humor instantly grab your attention. On the inside, however, his body is fighting a rare, cancerous tumor in his brain and spine.

It’s called a diffuse leptomeningeal glioneuronal tumor, and only a handful of cases have been documented worldwide, says Chad Jacobsen, MD, the neuro-oncologist at Levine Children’s Hospital leading Parker’s treatment.

“Because Parker’s tumor is so rare and can’t be removed surgically, there is no standard course of treatment,” says Dr. Jacobsen. “We had to spend a lot of time contemplating his disease and reviewing what little is known about it to come up with our own unique plan for him – and that’s what we did.”

“So, in 2015 we went to see a neurologist, who performed another MRI and found a tumor on his spinal column that likely had been there since birth, causing his condition,” says Allison.

Parker was quickly admitted to Levine Children’s Hospital, where he met Dr. Jacobsen, who began to monitor the little boy and develop a game plan to treat his rare cancer.

“It was definitely a few scary days of waiting in the hospital,” says Allison. “He’d always dealt with his left-hand weakness so well, so we never thought it could be something more serious.”

Dr. Jacobsen first tried to manage Parker’s tumor with a regimen of chemotherapy drugs. When those medicines no longer worked, he switched to another chemotherapy regimen.

Despite enduring two forms of chemotherapy over the course of 17 months, Parker kept his friends, family and his care team laughing with his witty personality. In May, he finished his last planned chemotherapy treatment and his tumor continues to show no signs of growth.

“He’s doing great,” says Dr. Jacobsen. “But we have to keep him under close observation because there’s a chance the tumor could progress. Still, we couldn’t be more proud of how our neurosurgery, oncology and neuroradiology teams pooled their expertise to manage Parker’s rare tumor.”

The Cowherd family’s experience has inspired them to start Pounding for Parker Foundation, a nonprofit that helps fund research efforts to advance treatment options for rare pediatric cancers.

“We know there’s something out there that can help kids like Parker – we just have to find out what it is,” says Allison.

Parker says his visit to Camp Care was the highlight of his summer. This will be Parker’s second year attending the weeklong camp for Charlotte-area children and families affected by cancer.

“He’s had to grow up a lot faster than most kids, and he knows it’s not fair, but he just takes it all in stride,” says Allison. “It’s our hope that the tumor goes dormant, but no matter what happens, we feel so fortunate to have such a great team – right here in our backyard – that can adapt and do whatever needs to be done to give Parker the best care.”

Connect With Us and Support Patients, like Parker, at Levine Children’s Hospital

Join us for Kids Helping Kids Day, Saturday, October 14 from 9 a.m. to noon – a morning where families can make cards and blankets to encourage and support patients at Levine Children’s Hospital. There will food, games, giveaways and other family-friendly activities. Learn more and RSVP!

Smarty Alert: Take 25% off storewide this weekend at Toys & Co.

From the Smarty Health Corner and CEENTA: how...

Girls on the Run of Charlotte Wondergirl 5K