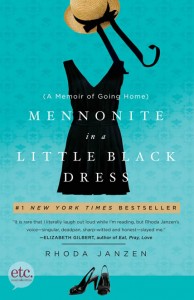 So, here are some books I’ve read since my last review:
a) The Gods Of Greenwich (financial fiction)
b) The Unimaginable (chick lit)
c) White Plague (thriller)

Here are my impressions:
a) a bit tedious
b) it was okay
c) meh

Since I’m not bursting with superlatives about any of these, I decided to go with book published in 2010: the memoir Mennonite In A Little Black Dress. Now, this is a great read, in the vein of Anne Lamott/Garrison Keillor/David Sedaris. I highly recommend it if you haven’t already read it, whether you think you like memoirs or not.

42 year-old Rhoda Janzen’s story opens with a series of circumstances that would reduce a normal woman to whimpering wordlessness. But Rhoda is not a normal woman. She is blessed (or afflicted) with a sunny resilience that allows her to relate the drama of her recent surgery—in which a ghastly operative mistake forces her to wear a urinary catheter—in such a funny way that I nearly lost continence myself. (Side note: Janzen does not care if you’re squeamish. She’s not going to mince words.) As soon as she recovers from the first medical disaster, she gets hit by a car, and her husband announces that he—well, I don’t want to spoil it. Suffice it to say that he does a startling, heinous thing, and instead of plummeting into despair like you’d expect, Rhoda drags her battered body to California, to the home of her Mennonite family.

Mennonites. The word brings to mind a group of apple-cheeked women in black dresses and white caps. As depicted by Janzen, they are a tribe of stout, healthy Germanic Christians, both stoic and chipper, finding entertainment in religious folk songs and internet pictures of kittens, all the while filtering out the less-wholesome aspects of the twenty-first century with an oblivious, sweet determination. Janzen somehow emerged from this virtuous environment to become a self-described liberal cosmopolitan. She’s married to a brilliant, charming sociopath, and when her marriage finally and spectacularly fails, she does what many a disillusioned grown child has attempted: she goes home again.

This is a set-up for the age-old clash of the eccentric older generation versus the rebellious younger one, which is really what the book is about. It is truly a memoir; while it is imbued in both the Mennonite culture and the relative decadence of the cultural elite, it’s not a discourse on what constitutes the Mennonite faith. It’s personal. The heart of Janzen’s prose is the lovely, crazy, unique relationship she finds with her family.

Mom was disappointed when I told her I’d been on a couple dates with someone, but she took it in stride. “What’s your fellow like?”
I was too emotionally battered to utter polite fibs. “Sort of a slacker, really. A relaxed pothead. He wears his pajamas to the grocery store.”
“Oh,” said my Mennonite mother. Then she nodded supportively. “A relaxed pothead sounds nice.”
“Maybe my cousin Wally smokes a little weed,” I said speculatively (although I’d bet my few remaining assets that he does not).
“Nooooooo,” said Mom. “Your cousin Waldemar would NEVER do weed! He drives a tractor! In his spare time!”
“How does driving a tractor prevent you from smoking weed?”
By now several people near us in line were eavesdropping. The man standing in front of us was trying not to smile.
“If you drive a tractor in your spare time,” my mother said firmly, “it means that you have a strong work ethic, which is probably why Waldemar has had the gumption to earn himself a nice beach house.”
“Surely he doesn’t drive his tractor on the beach?”
“No! He drives it at his parents,’ of course! He gives the nephews rides.”
“Oh! I thought that he was working on the tractor!”
“Waldemar works very hard,” Mom said proudly. “You know perfectly well that a tractor can be hard work and fun too. Like marriage.”
One of the best things about Mom is that she will follow you anywhere, conversationally speaking. She will answer any question at all, the stranger the better. Naturally I cannot resist asking her things no normal person would accept. “Mom,” I said, serious as a pulpit, “would you rather marry a pleasant pothead or your first cousin on a tractor? Both are associate professors,” I hastened to add.
“You marry your pothead if you like,” she said generously, “as long as you wait awhile. But as for me and my house, we will serve the Lord.”
“Hey!” I said, indignant. “How do you know the pothead doesn’t serve the Lord?”
“I think that the Lord appreciates a man on a tractor more than a man smoking marijuana in his pajamas,” Mom said earnestly. “I know I do.”

Janzen’s mom Mary, by the way, is the Best Supporting Actress of the book. In a break with the usual self-contained Mennonite way, she’s oddly blunt about bodily functions. She’s prone to launching into repulsive but hilarious monologues that almost require earplugs on the part of anyone nearby. No matter what’s going down around her, Mary is sweet and unfazed and unintentionally funny. She’s hugely lovable.

Janzen’s ex-husband did not fare so well in her portrayal of him, and he’s hardly the only victim of her mocking irreverence. His mother, various childhood friends and teachers, and Janzen’s sister’s sister-in-law Yvonne also get roasted, among many others. (Look for the scene about Yvonne and The Thang: it will leave you howling).

Which brings me to the big question I have about this memoir (and any memoir, for that matter, but especially this one). I’d love to know how Janzen’s family responded to the book. How do people who find themselves depicted through the filter of someone else’s subjective memories feel about it, especially when the description is unflattering? Janzen is an English professor, and she wields her words with a lot of power. Much of it is whimsically funny and loving, some of it is existential (Janzen, who has largely lost her religion, nonetheless flutters in and out of theological musings frequently) and the rest of it involves twisting some hapless offender on the skewer of her wit. How does someone defend themselves against a shellacking in a national bestseller? This book was extremely well-received—and the word-loving book geek in me loved it—but critical reviewers fretted about the portrayal of the Mennonite community at Janzen’s hands.

I know, I know, that’s the nature of memoir…but still, I wonder.

Note: There is a follow-up to this memoir titled Mennonite Meets Mr. Right: A Memoir of Faith, Hope, and Love, in which Janzen chronicles her evolving faith journey after she falls in love with a Pentecostal Christian man. Haven’t read it yet, but I’m planning to.

Because of you, libraries transform